Home > Tech > Finance, Telco and IT Sectors Top Targets for DDoS Attacks in 2015

Around one in four IT, telecoms and financial services companies experienced a distributed denial of service (DDoS) attack in the last 12 months, according to a survey conducted by Kaspersky Lab and B2B International.

However, while just under half (47% ) of financial businesses accept that they are prime targets, IT and telecoms companies don’t think they are any more at risk than other sectors, which could be leaving them vulnerable when it comes to IT security.

“As the recent DDoS attacks on telecoms companies and banks reveal, businesses in these sectors represent prime targets for DDoS attackers. In some cases, DDoS attacks are a smokescreen for the cyber-theft or result in exorbitant ransom demands,” said Evgeny Vigovsky, Head of Kaspersky DDoS Protection, Kaspersky Lab. 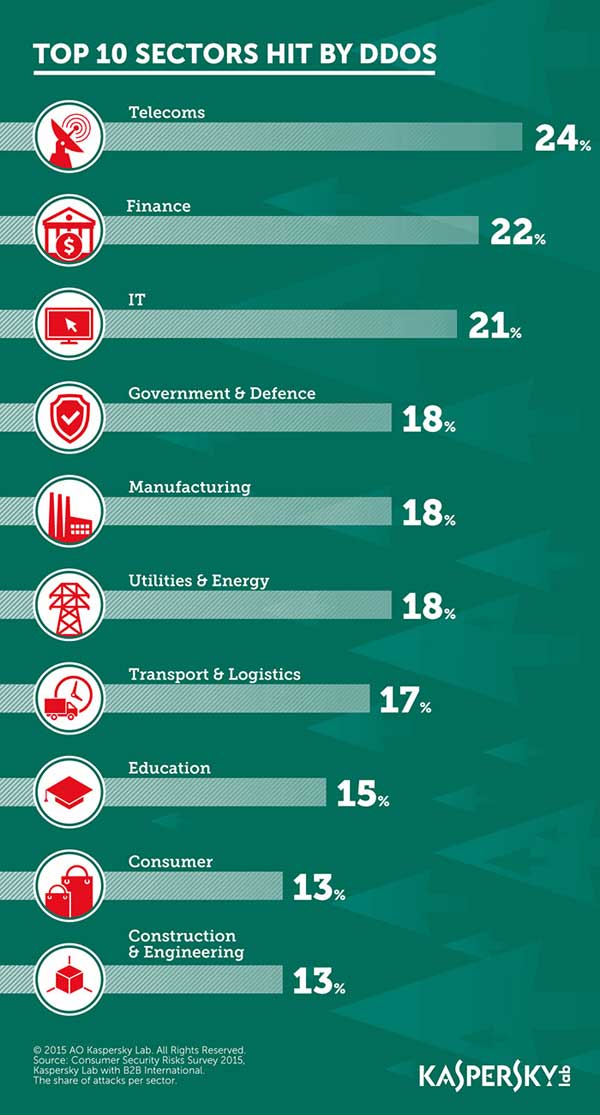 “That is why vulnerable sectors need to be extra-vigilant about security and be ready to deal with DDoS attacks. They need to build their understanding of the threat and choose the best protection against it. The days of DDoS attacks being an operational frustration that just resulted in some downtime are long over,” he added.

Distributed Network Attacks are often referred to as Distributed Denial of Service (DDoS) attacks. This type of attack takes advantage of the specific capacity limits that apply to any network resources – such as the infrastructure that enables a company’s website.

The study found that, overall, a third of companies (36%) believe they are likely targets for a DDoS attack, increasing only slightly for IT (40%) and telecoms businesses (38%).

DDoS attacks have become one of the most popular weapons in the cybercriminal arsenal, used to extort money, disrupt operations or damage reputations, and also to distract attention from another cyber-attack being carried out at the same time.

Nearly 75% of businesses have said that DDoS attacks against their companies corresponded with other security incidents.

Yet the study shows that many companies lack awareness of DDoS and are unsure about how to stop them or limit their impact.

Only 52% of companies feel well-informed about DDoS attacks and just 53% know how to prevent or mitigate them, rising to 61% of those in financial services and telecoms.

In the event of a DDoS attack, Kaspersky DDoS Protection enables companies to temporarily redirect traffic via an alternative route, running it through cleaning centers that filter out junk requests and forward legitimate traffic as usual.

This means users can continue to use the service or site safely and reliably even while a long and strong attack is underway.

Look Forward to an Enjoyable, Productive 2016 with the Lenovo Holiday Gift Guide

OPPO cuts the price of F5 Red 6GB, holds an Arena of Valor raffle, and invites everyone to the OPPO booth at UP Sunken Garden