Get ready for a supersized Christmas this year as Cartoon Network brings the gigantic Toon Machine to Manila for the first time on December 22 and 23 at the SM Mall of Asia Music Hall.

The Toon Machine is an indoor gigantic structure that puts a modern twist to the classic claw crane arcade game. Cartoon Network fans can control the machine with their parents serving as the claw, giving them the chance to grab everything they can in 10 seconds.

Following the success of the Cartoon Network Toon Machine in Brazil, Australia and New Zealand, the gigantic crane arrives in the Philippines just in time for Christmas, the best time of the year to grab-all-you-can toys and surprises.

Perfect for kids and the kids-at-heart, the event also has fun games and face-painting booths, all available for free! Aside from the toys inside the machine, Cartoon Network and its partners will also be giving away telpads, gift packs and other limited edition items.

To get a chance to try out the Cartoon Network Toon Machine, sign up and join the draw at the event area. Every hour, from 10am to 7pm, lucky winners with their parents will have the chance to get as much as they can inside the machine.

The Cartoon Network Toon Machine is presented to you by Bratz, PLDT Home Telpad and Alaska Choco, in cooperation with Jack n’ Jill Wiggles and special thanks to Sunkist, marketing partner Toy Kingdom and exclusive media partner Cignal. 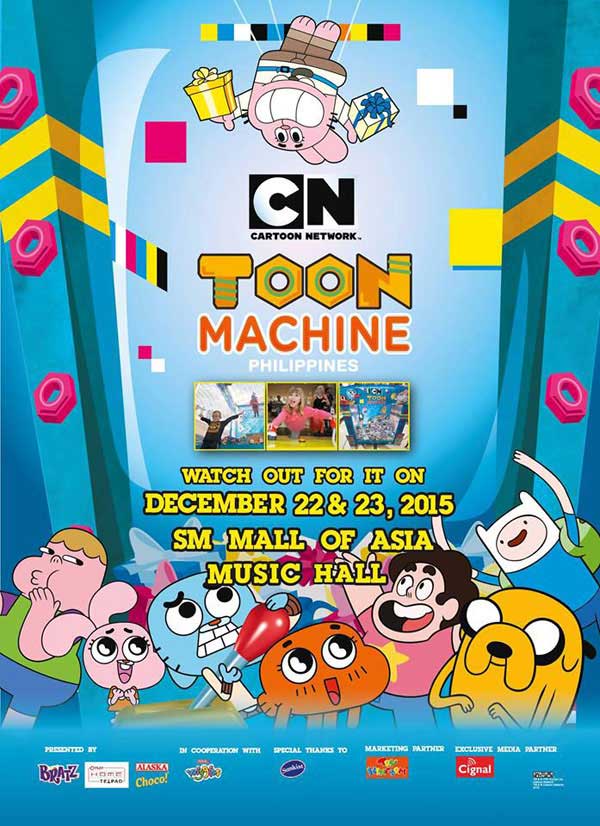 Cartoon Network is the leading kids’ brand in the Philippines. Its dedicated Philippine channel offers the best in original animated content including the multi-award-winning global hits Regular Show, The Amazing World of Gumball and Adventure Time, and brand new comedy We Bare Bears. Cartoon Network is available in 31 countries throughout Asia Pacific and is currently seen in more than 85 million pay-TV homes. Online, Cartoon Network reaches nearly three million unique visitors a month in the region. In Asia Pacific, Cartoon Network is created and distributed by Turner Broadcasting System Asia Pacific, Inc., a Time Warner company.\