SOC Staff, 7 years ago 2 min read 659
Your October is about to get SpookTABular with Ekotek’s amazing Ekotab deals!

And because we had so much fun with our Spectacular September promo, we’re bringing back the STORAGE, POWER and SUPER bundles.

STORAGE BUNDLE: Add P100 and we’ll throw in an 8GB MicroSD so you can store more pictures, games, videos and so much more. Oh and did we mention, it’s the perfect accessory to the Encore 2u’s enhanced HD capacitive touch screen (1024*600 pixels, 16:9).

POWER BUNDLE: Always on the go but can’t get enough of your favorite games?e’ve got just the thing for you. Get an Ekopack 3000mAh, for only P300.

SUPER BUNDLE: Because we want to give you the best of both worlds, you can get both the Ekopack 3000mAh and the 8GB MicroSD with your Encore 2u for only P3049* 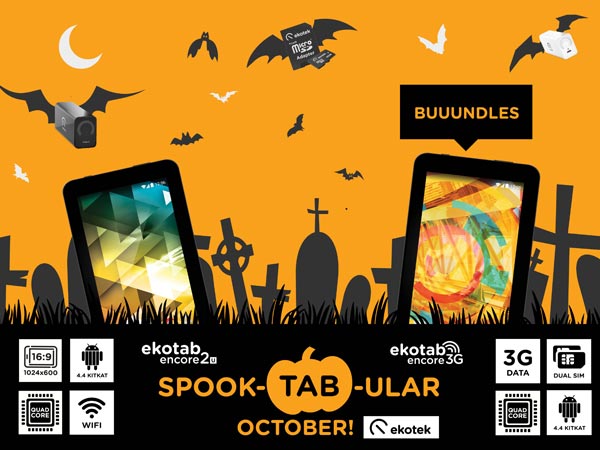 Just like the SpookTABular deals above, we’ve got the same storage, power and super bundles to accompany the Encore 3G.  You can avail of the 8GB MicroSD Storage bundle by adding P100 to your Encore 3G purchase. An additional P500 will get you the Power Bundle which includes the Ekopack 6000mAh. Throw in P550 on top of your Encore 3G purpose and you get both the 8GB MicroSD and the Ekopack 6000mAh. Now that’s a Super deal!

From Running the Household to Running an Empire: Survey Shows How Women Shape the Economy with Entrepreneurship

Brother Philippines: Providing Generations of Filipinos with Reliable Machines for Offices and Homes