Adobe Study shows that having such skill sets will increase recruitment possibilities. 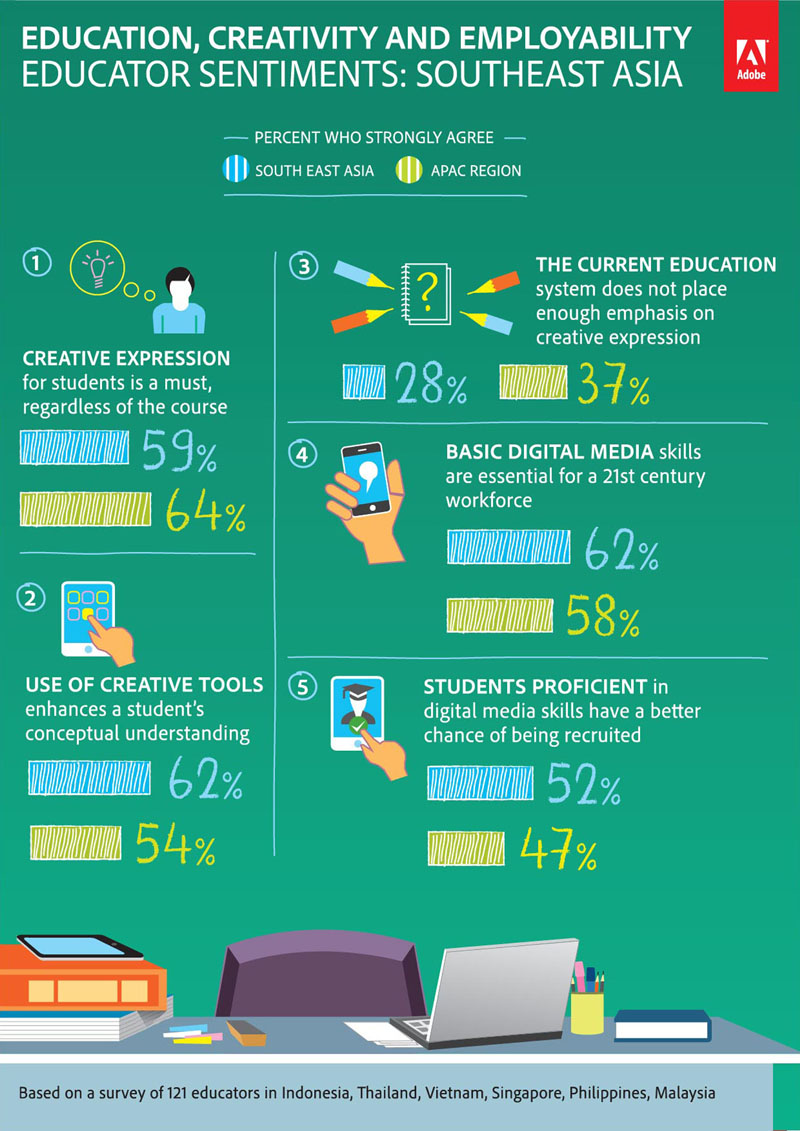 Adobe today unveiled the Southeast Asia findings as part of its Asia Pacific-wide study titled ‘Education, Creativity and Employability’ where 1531 educators from 13 countries across the region participated in, between 7th March to 18th March, 2014.  121 educators represented schools (K-12 segment) and higher educational institutes from Southeast Asia for this study. The key findings were announced at the 9th annual Adobe Education Leadership Forum held in Kuala Lumpur, Malaysia, from 31st March -2nd April, 2014.

The study revealed interesting points on the ubiquity of creativity in the classroom, and educators across Asia Pacific were unanimous in their agreement that creative expression is a must for all students regardless of their stream of study.

A majority of educators in Southeast Asia (52%) strongly agreed that students proficient in digital media skills have a better chance of being recruited when they enter the workforce. This result was above Asia Pacific’s overall sentiment of 47%.

The findings also revealed that in Southeast Asia:

Additionally, only 28% felt that the education system does not place enough emphasis on creative expression. Despite Southeast Asia coming in below the Asia Pacific average (37%), the gaps in the current education system also imply that not all students are gaining the necessary traits and skill-sets required for the modern workplace.

Commenting on the study, Peter McAlpine, Senior Director, Education, Adobe Asia Pacific said, “The education system in Southeast Asia has come a long way – over the years, we have seen educational institutes taking steps towards driving innovation and creativity in the classroom, enhancing the learning journey. The findings of the survey this year are a clear indication of the growing need for digital tools in the classroom to not only empower students, but also ready them for the 21st century workforce.”

Main findings of the APAC-wide study are available as a separate press release (see attached).

The Adobe Education Leadership Forum is Adobe’s flagship education thought leadership event in Asia Pacific. This year, more than 110 education leaders from across Asia Pacific will attend the forum. The theme of this year’s event is “Creativity is no longer an elective. It is our future.” The forum will explore the increasing ubiquity of creativity in education and the role that it plays in creating a creative workforce for tomorrow. It will explore ways of integrating creative faculties into our current education system, the opportunities and challenges that lie on the way.

The Forum is being held from 31st March to 2nd April at Kuala Lumpur, Malaysia. For more details on the event, visit: http://www.adobe-eduforum.com/2014 or join the conversation on twitter at: #AdobeForum14.

Cucina Andare Opens on the Roof Deck of The Link

NTT DATA Philippines is the new and improved Wizardsgroup, Inc.