Months after its launch in Manila, COGITO – the brand of tech wearables known for its fashionable connected watches – is proud to introduce an inspired new choice of premium materials for the high-end timepiece. The newest COGITO watches featuring genuine leather and elegant stainless steel will be exclusively available at Power Mac Centers nationwide beginning December 2014, just in time for the Holiday season. 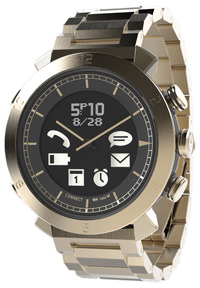 COGITO unites classic analog movement with intuitive digital notifications, bringing together the power of a connected watch and the sophistication of a precision-crafted timepiece.

COGITO CLASSIC watches serve as an extension of the smartphone, not a duplication of it, allowing users to organize an array of home, work and social communications. Notifications appear, at a glance, directly on the wrist and provide a seamless link with those calls and messages deemed most important by the user. It is a solution for those who believe life should be enjoyed, not interrupted. COGITO is meant for those
whose time matters.

The watch takes inspiration from the French philosopher’s famous phrase, as it reflects our own design philosophy. COGITO merges 21st century technology with classic analog movement, because fashion and function are equally important.

Unlike other smartwatches, which are primarily electronic gadgets, COGITO effortlessly balances smart technological innovations with the fine craftsmanship expected in a premium timepiece. Fashion-forward design, precise Japanese quartz movement, high-end finishing and materials are all hallmarks of the COGITO brand.

Henri-Nicolas OLIVIER, CEO of CONNECTEDEVICE and makers of the Cogito brand, says: “We don’t believe it’s necessary to compromise craftsmanship for connectivity. Both Style and Smarts are equally important in our connected watches. It’s a core value in our design philosophy.”

“Watches are different from other electronic devices,” adds OLIVIER. “Because they’re personal, so close to the body, consumers expect something that reflects their tastes and personality. For this reason, the look of a connected watch is just as important as its functions and features. COGITO is unique in this respect.”

Designed in France by award-winner Xavier Houy, COGITO CLASSIC appeals to the busy, social and fashionable crowd. The watch features a lucid digital display overlaid by two hands in traditional analog movement. When linked with the smartphone or tablet app, COGITO allows users to cut through the digital noise by customizing settings based on their priorities and selecting which notifications will appear. On the watch face, users can see who is calling or messaging, and decide whether to answer or mute it. COGITO exudes high style with a selection of elegant color options of silicon wrist straps.

Bluetooth® Smart technology allows COGITO to run on a conventional button-cell battery without requiring a recharge. The battery guarantees many months of uninterrupted power without a charge and, when necessary, can be replaced easily by the user.

“Users don’t want another power-hungry device,” remarks OLIVIER. “They shouldn’t have to remember to charge their watch, too. COGITO CLASSIC, unlike other smart watches, does not come with the burden of bulky chargers and tangled power cords. It’s the same experience as wearing a conventional watch, only with the added benefit of notifications.”

COGITO is engineered to follow active users, especially in situations when the phone cannot be in their hands. With enhanced water resistance up to 10ATM, the watches safely alert users to calls and messages even in wet situations – under the shower, in the rain, on the beach and at the pool.

The CONNECTED WATCH APP is available on the App store and Google Play store.

Lazada.com.ph to Stage the Biggest Online Shopping Extravaganza this December 12

A New World of Entertainment with Sony’s Xperia Lounge App