MANILA, Philippines – In a typical Filipino gathering, the star and center piece of any grand occasion is lechon. This long-time favorite, skewered roasted whole pig, not only in the country, but has also been gaining popularity all over the world. Critically acclaimed author, restaurateur and host Anthony Bourdain, has so famously proclaimed lechon as the “best pig ever!”

In the spirit of celebrating this unique Filipino pride, the Philippines will be trying to break the renowned Guinness World Records title for the Largest serving of roast pork (lechon). This feat is set to happen on November 8, 2015, at the Quezon Memorial Circle grounds.

On October 22, 2015, Calata Corporation held an exclusive media briefing in Makati to key media and bloggers, in order to showcase the possibilities of aiming for the world record.  Calata Corporation, is one of the biggest agricultural conglomerates in the Philippines. It prides itself as the largest retailer and distributor of top agrochemical brands, feeds, fertilizers, veterinary medicines, and seeds throughout the country. CAL also forged strategic partnerships with noted, key firms around the world in pursuit of the best practices and products. For instance, atie-up with Topigs Norsvin Netherland now supplies genetically superior pigs to local breeders, while an arrangement with an Argentinian agricultural mechanization firm has resulted in the debut of automated corn planting in the country to substantially increase production while supporting direct or “zero tillage” farming, already standard practice in more advanced agricultural economies. In addition, CAL’s meat fabrication facility today supplies quality stock to large grocery chains and restaurants.

Even as it adopts the country’s only holistic “farm-to-plate” business model, CAL is gearing for bigger, more exciting things. Even as net profit grew by 46 percent in 2014 year on year, chairman and chief executive officer Joseph Calata believes that the future still holds a lot more potential for Philippine agriculture in general. Strengthening the sector will also help towards keeping Filipinos in the country – rather than seeking a more viable life outside it. He is looking for like-minded people to nurture – and achieve – the CAL vision of a globally competitive Philippines that can count itself among agricultural giants once more. 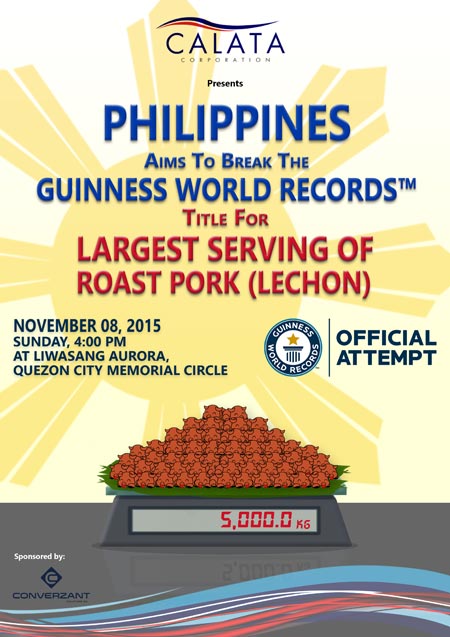 Calata Corporation has built its legacy upon the foundations of hard work, innovativeness, industry and belief in the innate giftedness of the Filipino people. In line with this, and in accordance to Calata’s 16th year Anniversary on November, the company sought to celebrate this by aiming to set a  a Guinness World Records title for the Largest serving of roast pork, and to showcase and emphasize the Filipino spirit and tradition, and our passion for good food.

To know more about the event and the company, visit www.calatacorp.com.

Have your .blogspot blog point to a domain name

3 Common Types of Scams You Should Be Aware Of