Be a hero, don’t give up, as the bundle rains from above. ASUS and NVIDIA has got your back with the “Win With Heroes” bundle. Customers who buy ASUS GeForce® GTX 960, GTX 970, GTX 980, and GTX 980Ti graphics cards from select dealers will get a copy of the highly anticipated Overwatch game. Don’t worry, there’s still time to catch up as the promo runs until July 31, 2016. 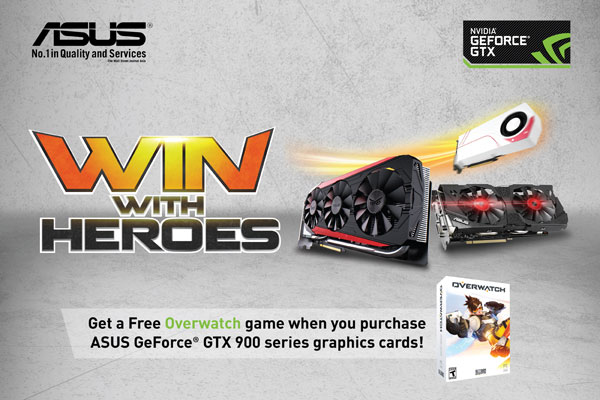 To claim the game, gamers only need to fill out details in this link: http://woobox.com/uuty2u

Power Packed– For Those Who Need That Extra Punch and Durability

If you’re aiming to have a very formidable graphics card to last you for years to come, then best get the ASUS Strix GeForce® GTX 980Ti graphics card, the game and graphics card bundle stands as the most futureproof alternative even for those triple A games with its Triple WingBlade with 0dB fan design, AUTO-EXTREME Technology and DirectCU III cooling tecnology. If you want Overwatch in high graphics settings, you can get the ASUS Strix GeForce® GTX 970. This card can help you dominate in a lot of games using its DirectCU II cooling technology and 0dB fans smooth and quiet graphics.

Gamer Package – Reward Yourself After A Hard Day’s Work

The graphics card, an ASUS Strix GeForce® GTX 960, is a power efficient power house that stands ready for both work and leisure. It uses NVIDIA’s latest Maxwell architecture that boasts low-power consumption without compromising on performance. As part of the Strix series, the graphics card’s fan is set to 0dB during light moments such as word processing and browsing, for complete silence. It only ramps up to cool the card during intensive applications.

About ASUS
ASUS is a worldwide top-three consumer notebook vendor and maker of the world’s best-selling, most award-winning motherboards. A leading enterprise in the new digital era, ASUS designs and manufactures products that perfectly meet the needs of today’s digital home and office, with a broad portfolio that includes motherboards, graphics cards, optical drives, displays, desktop and all-in-one PCs, notebooks, netbooks, servers, multimedia devices, wireless solutions, networking devices, tablets and smartphones. Driven by innovation and committed to quality, ASUS won 4,326 awards in 2014 and is widely credited with revolutionizing the PC industry with its Eee PC™. ASUS has more than 13,600 employees around the globe with a world-class R&D team of 4,500 engineers. Company revenue for 2013 was approximately US$14 billion.

Festive Time Or Any Time, Shopping Is Just A Click Away With Online Convenience

Christmas Treat from Promate, available at NBS and Power Books