Pirates are getting more and more creative to be able to sell their wares, especially with the more intense operations of the Pilipinas Anti-Piracy Team (PAPT). Instead of simply illegally copying discs of business software and operating systems, scrupulous merchants are also now mixing in pirated software along with the legitimate copies that they are selling.

According to the National Bureau of Investigation (NBI), the copies are of very high-quality and can easily deceive customers into thinking that they are buying legitimate software. “The customers are basically paying for the price of an original but receiving pirated copies in exchange,” operatives from the NBI noted.

Late last year, the NBI Intellectual Property Rights Division implemented a search warrant at Gaisano Interpace Computer System operated by Michael Sia, a computer parts and software retailer at the Gilmore IT Center, a popular computer store hub. The raid seized 26 high-quality unlicensed copies of the Microsoft Windows 10 Professional operating system. The discs were marked “Made in Malaysia” and “Made in the United States”, but were found to be pirated upon authentication. 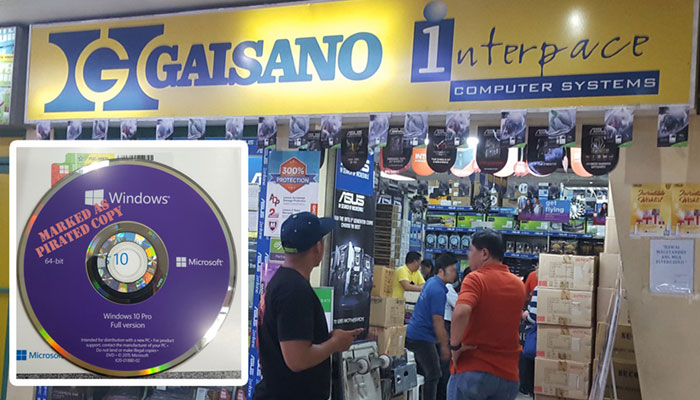 The PAPT warned the public, especially businesses, to be vigilant and to be careful when dealing with computer stores that offer deals that are “too good to be true.” It is advisable to buy from authorized retailers of any of their chosen software or tech products.

Microsoft Philippines is currently pursuing a case against Gaisano Interpace.

Formed in 2005, the PAPT is a joint effort from agents of the National Bureau of Investigation, Optical Media Board, the Philippine National Police and the Intellectual Property Office of the Philippines, which joined the group in 2011. Its goal is to execute integrated and coordinated endeavors by the government to counteract the negative effects of software piracy on the local IT industry and the economy.

For more information on PAPT campaigns and details on PAPT crackdowns, call the PAPT Secretariat at (02) 512-9757 or visit www.papt.org.ph.

Personalize your coffee and discover which suits you best