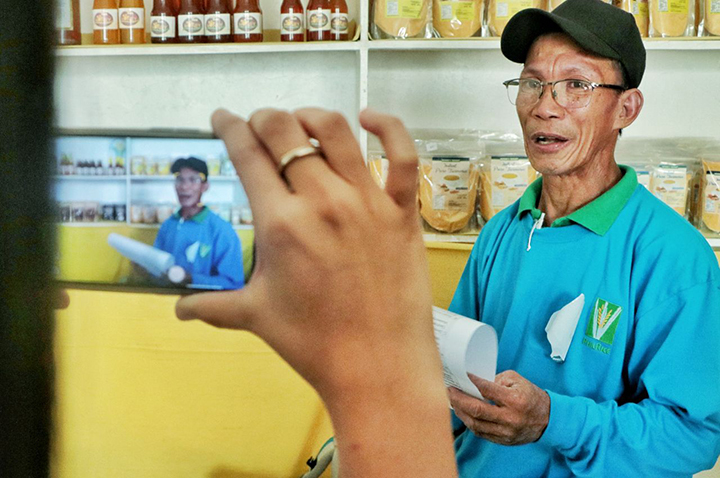 Mang Vicente “Vic” Berdan, a 59-year-old farmer from Tanay, Rizal, is not new to Facebook. His cover photo shows him and his wife harvesting crops from their farm. The couple also actively replies to friends who comment on their online photos, asking about their produce. Beyond basic functionalities though, Mang Vic wants to use Facebook to further promote the rice and organic vegetables that he produces. A 2008 Regional Outstanding Gawad Saka awardee for Rice, he sees the popular social media site as a channel to share his knowledge on farming.

Assisting Berdan in learning more about how to use and benefit from Facebook, Twitter and Instagram, as well as create and upload Youtube videos, is his niece Camille Margaret Custodio. The 18-year-old college student was his learning partner at the Tanay leg of the Digital Farmers Program (DFP) participated in by eleven farmer-youth pairs.

The DFP is an initiative of the Department of Agriculture – Agricultural Training Institute (DA-ATI) and leading wireless services provider Smart Communications (Smart) that aims to empower small-scale farmers by educating and giving them access to available digital tools and technologies.

Berdan commends Smart and DA-ATI for coming up with the brilliant idea of pairing older farmers and the youth. Given his advanced age and limited knowledge on all things techie, he admits that learning and understanding social media and digital tools is easier with Camille on hand to guide him.

Program partner Probe Media Foundation conducted a workshop on how to create short videos with mindful and effective content and good visuals during the “Kwentuhang Agri” session. This is to prepare each farmer-youth pair to make their own videos about agriculture.

“DFP aims to advance the local industry’s adoption of more innovative forms of technology in farming, which is in line with the Government’s long-term vision of IoT penetration in Philippine Agriculture and overall digital inclusion,” says Darwin F. Flores, VP for Community Partnerships of Smart.

“It is part of the Smart Communities advocacy of Smart, which taps Technology for Development (Tech4D) to narrow down the digital divide. The project specifically gives emphasis to the UN’s goals of No Poverty and Industry, Innovation and Infrastructure,” adds Flores.

By partnering senior farmers with young people, preferably their children or a relative, DFP is able to engage the youth to address identified stumbling blocks in agriculture.

“Smart conducted a series of benchmarking activities with DA-ATI and it was revealed that we have an aging population of farmers – with the average age at 57 years old – and that the younger generation is not too keen on pursuing agriculture as a profession,” warns Angelica Umali, Information Officer of DA-ATI Central Office.

Due to the possibility of running short on farmers who will feed the next generation, those behind DFP hope that people would develop appreciation for agriculture through information sharing.

“Agriculture will always have a space in my life and heart,” assures Camille in Tagalog. “We need to pay special attention to it and look at social media and other latest technologies that can help promote and empower farmers.

“We hope that the public, especially the youth, will learn more about agriculture – how it is not a profession that people should belittle,” she says.

According to Rolando Maningas, Information Officer of DA-ATI Region 4A, due to Tanay’s proximity to Metro Manila, commercialization and industrialization pose a challenge to agriculture in terms of getting more young people involved. This is where the value of having more agri-related online content comes in.

“Generally, millenials go by the concept ‘to see is to believe’ and ‘to experience is to apply’,” Maningas points out. If people get to see blogs or videos showcasing success in farming, he believes that it can be a driving factor for more people to get interested in agriculture.

As farmers are encouraged to put out their stories on social media, other farmers also stand to benefit from their online contributions. “It is a great help to agriculture and the entire community for the farmers to have an avenue to share their farming practices,” says Maningas.

Mang Vic is excited to impart his know-how in farming through the help of technology. “I particularly want to push the idea of sustainable farming to a wider audience,” he shares.

The Tanay leg of the DFP typifies the effective collaboration between youth and farmer that the program wishes to encourage and strengthen to benefit the agriculture sector.

“There is knowledge transfer of agriculture from farmer to youth and technology exchange from youth to farmer, thus encouraging these youths to be the next generation farmers,” says Flores.

The Tanay leg follows other pilot implementations of DFP held at Alfonso, Cavite and Lobo, Batangas. It is the 3rd of 25 legs that will bring DFP 101 to municipalities representing each region.

For more information on the next batch of DFP trainings in different regions, as well as other Smart CSR initiatives, send an email to Public PublicAffairs@smart.com.ph or visit www.facebook.com/SmartCommunities.