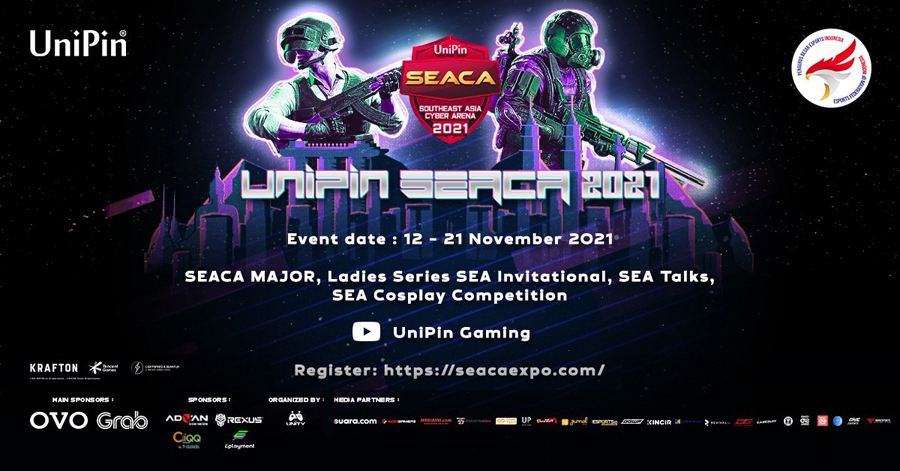 Manila, 23 November 2021 – The UniPin SEACA 2021 event series officially concluded last November 21, after the grand finale of SEACA MAJOR round. Indonesia’s BOOM Esports won the public category after successfully retaining their position at the top of the table. Meanwhile, the ladies’ category trophy was won by the Thai ladies team, Valdus Eufrosine.

The SEACA MAJOR round has held for three days from November 19 to 21, 2021 online. Sixteen Southeast Asian esports teams competed and showed their best skills on PUBG Mobile (PUBGM) game through a ranking system. The SEACA MAJOR is the final stage of UniPin SEACA 2021 series which has been held since early June thru qualifying rounds in six countries. The total prize pool provided during the entire UniPin SEACA series this season is worth USD33,000.

BOOM Esports team managed to be the champion of public category after outperforming 15 other teams with a final tally of 132 points. They only had a slight difference in points with the 2nd best team, Genesis Dogma Gids, also from Indonesia. BOOM Esports also obtained two Winner Winner Chicken Dinners (WWCD). The team itself has known to have remarkable track record in UniPin SEACA history. Previously, they have won the DOTA 2 and Counter Strike: Global Offensive (CS: GO) categories in 2018, while snatched Free Fire category trophy in 2019.

The highly anticipated SEA Cosplay Competition featuring Genshin Impact characters and with a USD3,000 prize pool concluded last November 20, with the Grand Prize going to Zackt (Zack Tolosa)  of the Philippines. The winners from each participating country are as follows; Philippines’ Best Male Zackt as Xiao and Best Female Roxanne Kho as Ningguang with Reesh Casillan as Amber and Anjurii as Barbara joining them for the finals. Indonesia’s Best Male Anggoro Dwi as Zhongli and Krrn as Jean, joined by Kyh Raka as Pyro Abyss Mage and Liem as Tartaglia (Childe). Malaysia’s Best Female Sally Dorasnow as Klee and Runner Up Hayate Konno as Yoimiya, with Missa MHC as Kokomi and Vinca Kazuki as Noelle. Thailand’s Best Female Pinya as Yoimiya and Runner Up Jane Kurumin as Raiden Shogun joined by TenjouKana as Jean and PlaSEN as Barbara. There are Fan Favorites from the Philippines Rijin as NPC Katheryne and from Indonesia Sisillia Vidhinati as Keqing. The panel of judges who are also prominent cosplayers includes Clarissa Punipin from Indonesia, Rikka Blurhound from Malaysia, Thames Malerose from Thailand and from the Philippines, Prince and Awie De Guzman.

The whole excitement of UniPin SEACA 2021 series of events can be viewed again through seacaexpo.com. Rebroadcasts of all matches including Ladies Series SEA Invitational and SEACA MAJOR can also be watched on UniPin Gaming’s YouTube Channel. A more detailed information about each match can be found on @unipinladiesseries or @seaca.gg Instagram account for general information.

UniPin SEACA 2021 is hosted by UniPin Community (UNITY) and supported by PB ESI, Tencent, Moonton, OVO as main sponsor, Grab, Advan, Rexus, Sandisk, CLiQQ by 7-Eleven and Eplayment.  More details and information can be found at UniPin Philippines thru www.unipin.com or on via  www.facebook.com/UniPinPhilippines or www.instagram.com/unipin_ph/.

Know more about Marian Rivera as a Shopee mom, her motherhood tips, and must-haves to check out at the Mother’s Day Blowout