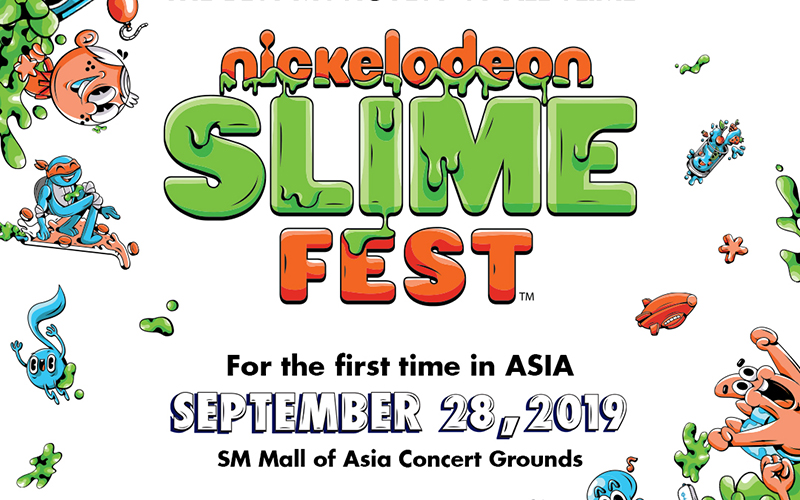 The first Asian Nickelodeon Slimefest lands in the Philippines

Nickelodeon presents Asia’s first ever Nickelodeon SlimeFest in the Philippines! In collaboration with Globe Telecom, the ultimate slime-filled, multiplatform music and entertainment event for kids and families will be held on 28 September at the Mall of Asia Concert Grounds. Get your festival mode on with performances by top regional and local music artists, immersive one-of-a-kind experiences, Nickelodeon stars and characters, and plenty of the brand’s signature green slime!

Tickets will go on sale on SM Tickets from August 15, but Globe customers can get first dibs at the Globe Exclusive Pre-Sale on August 14! Globe subscribers have to visit the SM Tickets outlet at the SM Mall of Asia on August 14, and show their Globe mobile signal or their Globe At Home app at the ticket counter. Each customer can purchase up to six (6) SlimeFest tickets during the pre-sale.

“We are proud to host the very first Nickelodeon SlimeFest in Asia! This has been long-awaited, and will bring to life the elements we know kids love – music, slime and mayhem! Our Nickelodeon fans have made us the number 1 kids channel in the Philippines so we’re happy to give back with even more content and events that they love us for. Part music festival and part giant party for the entire family, SlimeFest is definitely one for the books!” said Jacque M. Ruby, country lead of Viacom International Media Networks in the Philippines.

“We are so excited to partner with Nickelodeon in bringing Asia’s first Nickelodeon SlimeFest to the Philippines. We can’t wait to give our customers a wonderful, one-of-a-kind family bonding experience,” said KD Dizon, Globe Vice President of Mobile Consumer Business.

Nickelodeon is also announcing its first wave of performers. Thai-German singer, songwriter and actress Jannine Weigel is unveiled as the regional act who will perform her unique brand of catchy pop tunes, and for the first time in the country. Pop singer and star of Nickelodeon’s The Thundermans Kira Kosarin will host as well as perform at SlimeFest. Updates on other hosts and performers will be announced soon.

In addition to live music, SlimeFest will feature a non-ticketed festival area that will showcase one-of-a-kind experiences for the entire family. Get messy and have a blasting good time with slime like you’ve never seen before, meet with your fav’ Nickelodeon characters and stay tuned to other music-themed activities and games.

SlimeFest in the Philippines is presented by Globe and co-sponsored by Krispy Kreme, Shakey’s, Richprime, Yakult, Havaianas, and Bean Leaf.

SlimeFest has seen success around the globe as a multiplatform music and entertainment event since its overseas inception in 2012 in Australia. The Filipino music festival will mark the seventh local adaptation of this popular event and nearly 162,000 people have attended Nickelodeon SlimeFest events around the world to date, including sold-out shows in South Africa, Australia, Germany, Italy, UK and Spain. Another upcoming Slimefest will be SlimeFest UK at The Arena at Blackpool Pleasure Beach on 19-21 October, with more international event dates to be announced later this year.

In the weeks ahead, fans can get direct information and news updates by following Nickelodeon on Facebook to keep up with all-things #SlimeFestAsia. Stay tuned for the latest news and ticket giveaways by following Globe on Facebook and visiting globe.com.ph.

Who are Chloe, Dianne, and Axel and Why Have They Taken Over Your Favorite Brands’ Accounts?

Spotify Wrapped 2019 Reveals Your Streaming Trends, from 2010 to Now