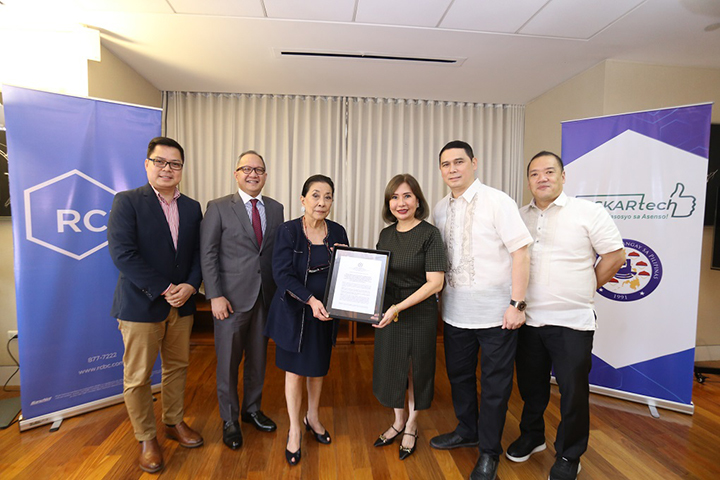 Rizal Commercial Banking Corporation (RCBC) has taken the first steps to bringing its digital financial inclusion initiative to grassroots communities as it gets the support and commitment of Liga ng mga Barangay sa Pilipinas (LNB).

The LNB led by National President Eden Pineda, presented its national executive board resolution stating that the organization is adopting DiskarTech: Kasosyo sa Asenso as a growth enabler and capacity-building measure for microenterprises in every barangay and its constituents. DiskarTech is a financial inclusion accelerator platform by RCBC that aims to stimulate economic activity to help uplift the unbanked and underserved Filipinos.

LNB is the official organization of over 42,000 barangays throughout the country. It is committed to providing avenues and assistance to promote welfare and ensure success of the national government’s National Strategy for Financial Inclusion and National Retail Payments System.

“This financial inclusion accelerator will be pervasive throughout the country as it would address the huge gaps in financial services while reducing the number of unbanked and underserved communities,” said RCBC Executive Vice President and Chief Innovation and Inclusion Officer Lito Villanueva.

By adopting DiskarTech, LNB will be taking an active role in leading workshops and programs on financial education and literacy with the assistance of the DiskarTech National Coordinating Team. They will also be engaging its member municipalities to appoint their own DiskarTech Community Leader (DCL) who will facilitate participation of residents and entrepreneurs in the program.

“DiskarTech will pave the way for the real transformation of our communities nationwide as it would provide opportunities to our constituents, giving them the chance to be part of the formal financial system through technology,” said Liga ng mga Barangay National President Eden Pineda.

In an effort to encourage economic activity, partner sari-sari stores or microenterprises will also be identified as Barangay Digital Community Centers (BDCCs) to serve as the go-to hub of every resident for their financial needs – whether it’s paying bills, depositing savings to their accounts, buying micro insurance or sending money to their loved ones.

With this, RCBC hopes to turbocharge the growth of digital financial transactions in the country from the current one percent to a minimum of twenty percent by next year. Through DiskarTech, this initiaitve hopes to bring to realization the vision of Bangko Sentral ng Pilipinas of creating a cash-lite and digital economy for greater efficiency, security, interoperability, and affordability.

Joining LNB and 20 other existing partners, a number of private organizations have also signed up recently to join the DiskarTech financial inclusion ecosystem to benefit their respective constituents. These partners include Ka-Entrep Micro and Small Entrepreneurs Organization of the Philippines, Bangko Pangasinan, and Rizal Microbank, among others.

“DiskarTech is an open platform and the way it works is that banks like us can communicate with other banks. Similar to an open banking system, there will be no barriers and it will become interoperable to make it easier to reach and assist the underserved market,” said Gregory De Guzman, Bangko Pangasinan president and COO.

Joseph Lumain, Strategic Partnerships and Special Initiatives head at Rizal Microbank, agrees that DiskarTech will be an effective way to reach numerous individuals at the same time. “Basically, what DiskarTech is offering are the basic services of a bank through digital means. And in an era where almost everyone is tech-savvy, DiskarTech can be the perfect solution to present financial services in an understandable way, and eventually helping answer the issue of financial inclusion.”

The Lenovo A7000 Plus Now Available in Retail Stores Nationwide