PWR Terminus: The End of Infamy

How will they end professional wrestling infamy you ask? Let the matches speak for themselves:

In what will be the rematch of the year, “The Social Media Sinister” Ken Warren has accepted the challenge of D-Town’s own Chris Panzer. Will Chris Panzer prevail or will Ken Warren once again pull the plug on Panzermonium?

After suffering at the hands of “Silent Rage” in PWR Renaissance, both Kanto Terror and THE Nelson Jr. challenged Main Maxx respectively. Seeing as how he felt one of them wasn’t enough, Main Maxx gladly accepted to take on both competitors at once in what will be the FIRST EVER HANDICAP MATCH in Philippine Wrestling history. Will the man from Kanto Tinio and the Muntinlupa Baller get revenge or will Silent Rage dominate once more?

“The Senyorito” Jake de Leon VS. A PWR Bootcamper

On October 2014, PWR Bootcamp was officially opened. Now, on December 13, 2014, one PWR bootcamper has a chance to showcase what he has learned at PWR Terminus as he will be facing none other than “The Senyorito” Jake De Leon. The Master of Minimum Wage and Maximum Rage is out to see if that bootcamper has what it takes to step into a PWR ring.

Mayhem Brannigan VS. The Apocalypse

After a long heated struggle between himself, Classical Bryan Leo, and the PWR Board of Directors, Mayhem Brannigan was given the chance to win back his RIGHT to be reinstated into PWR if, however, he is able to win a match against an opponent both at Bryan Leo’s choosing. Now, Mayhem has to go up against destruction personified, The Apocalypse, in a No Holds Barred, Falls Count Anywhere match! Will Mayhem be able to do what’s RIGHT or will The Apocalypse rain down and keep Mayhem Brannigan out of PWR for good?

In the main event of PWR Terminus, the first-worlder, Classical Bryan Leo goes head to head against Manila’s own, Bombay Suarez. In a classic battle between good and evil, will Classical Bryan Leo Royally Flush Down the man known as Bombay or will The Legend of Philippine Wrestling finally shut up Bryan Leo?

Witness all of these amazing matches on 12/13/14, 6:00PM at Makati Cinema Square in the Makati Square Arena and witness the end of Philippine Wrestling Infamy. 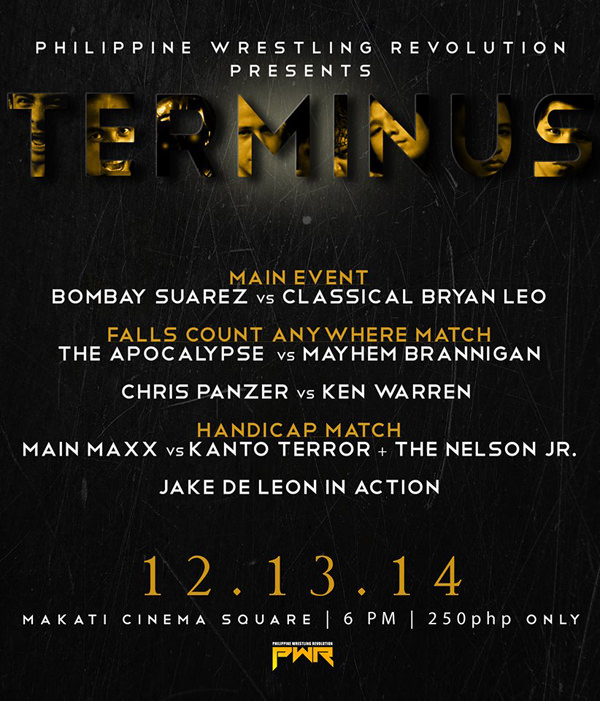