Power Mac Center, the premier Apple partner in the country, together with Microsoft Philippines recently launched Office 365 bundles for the coming holidays. Office 365 allows users to install Office on multiple platforms, including OS and iOS devices to be connected to the service with a single subscription, enabling users to do their best work – anywhere, anytime and with anyone.

“Power Mac Center is truly committed to provide Filipino consumers the complete Apple experience. We are always looking for ways to support their needs, which is why we know that a lot of our loyal patrons have been anticipating the Office 365 for OS and iOS,” said Joey Alvarez, Marketing Director of Power Mac Center. “Aside from familiar apps like Word, Excel, and PowerPoint, Office 365 has a lot of new and improved features like Skype, OneNote and OneDrive, optimized for OS and iOS devices.”

“This partnership is a key milestone for Microsoft Philippines as we make Office 365 available across all platforms in the mobile-first, cloud-first world. Microsoft’s mission is to empower every individual and organization to achieve more – and we’ve taken this to heart by breaking down ‘competitive barriers’ and partnering with Power Mac Center. We want to make Office accessible across all platforms, most especially in a wide range of Apple devices,” said Jerry Bongco, Director for Consumer Business Division at Microsoft Philippines.

A lot to love in the new Office for Mac

The new versions of Word, Excel, PowerPoint, Outlook, and OneNote provide the best of both worlds for Mac users—the familiar Office experience, paired with the best of Apple devices. Office 365 is also cloud-connected, so users can quickly get to their documents they’ve recently used on other devices and pick up where they left off. Sharing documents have also been made easier as Office 365 offers unparalleled compatibility on computers, tablets, phones, and online. No more sending documents back and forth in email: it’s easy for users to share their work and have others review it, since several people can edit the same document simultaneously. 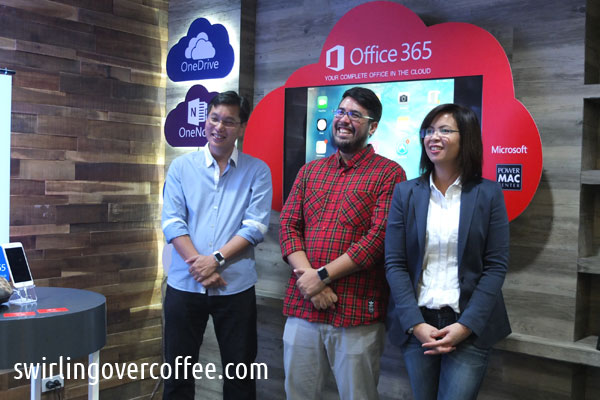 Office wherever, whenever you want it

Apart from being synced across multiple devices, Office 365 provides 1TB OneDrive online storage that can be accessed anytime, anywhere. Office 365 also allows users to stay connected with 60 minutes of free Skype calls per month to landline and mobile phones in more than 60 countries.

Furthermore, subscription to Office 365 assures that one’s version of Office is always up to date. Users don’t have to worry about upgrading again because with Office 365, the latest Office applications, features, and services are always included. Subscribers can also get support right away from Microsoft-trained experts, by phone or chat—at no extra charge.

New and loyal patrons of Power Mac Center stand to benefit from this milestone partnership. Office 365 with Office 2016 is now available at all Power Mac Center branches nationwide. Customers who will purchase any Mac device on cash or installment will get a special offer on the Office 365 Personal. Promo period is from December 1, 2015 to February 29, 2016.

Visit any of Power Mac Center’s 26 stores nationwide to know more about Office 365.

Founded in 1975, Microsoft (Nasdaq “MSFT”) is the worldwide leader in software, services, devices, and solutions that help people and businesses realize their full potential.

Microsoft Philippines, the local subsidiary of Microsoft Corporation, has been constantly bringing innovation and making its technology available to Filipino businesses and individuals since 1995.  As a committed and trusted partner in nation-building, Microsoft Philippines has made it its mission to fuel growth and healthy communities, as well as transform locally-based businesses and empower them to compete in the global economy.

Going Crazy over Madonna in Manila?