LG Donates Digital Displays to the City of Pasig 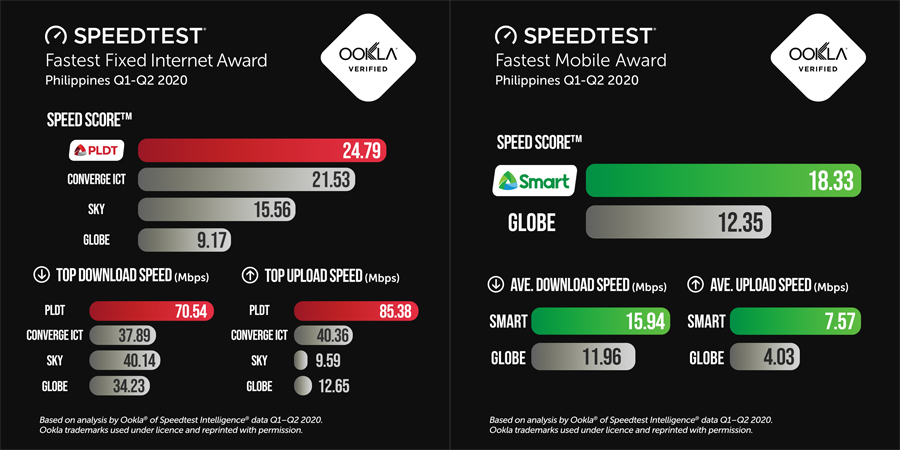 PLDT, Smart Outpace Competition in First Half of 2020 – Ookla

Despite the surge in Internet traffic after the country was placed under lockdown in mid-March, PLDT and its wireless subsidiary Smart Communications, Inc. (Smart)’s fixed and wireless networks have remained resilient and outpaced yet again the competition in the first half of 2020, according to Ookla, the global leader in internet testing and analysis.

PLDT and Smart have once more been found to have the country’s fastest fixed and mobile internet networks based on analysis by Ookla of tests taken with Speedtest® covering the first half of 2020.

“Over half a billion users rely on Speedtest to measure their internet performance every year. Ookla analyzes these test results to get an unparalleled view into mobile and fixed broadband metrics around the world. It is our pleasure to recognize Smart as the Fastest Mobile Network and PLDT as the Fastest Fixed Network in the Philippines based on our rigorous analysis. These awards are a testament to PLDT and Smart’s exceptional performance, as experienced by their own customers, in Q1 and Q2,” said Doug Suttles, CEO at Ookla.

These results take into account the impact of COVID-19 and the community quarantines on the network.

According to Ookla data, average download speeds dipped at the beginning of the community quarantines. This was due to internet traffic moving from central business districts to more residential areas as people began working remotely from home and going online for services such as online banking, shopping, and video streaming and gaming, to name a few.

Smart’s speeds have since recovered to 20.12 Mbps in July, due to subsequent network optimization efforts such as reallocating its assigned 1800MHz frequency from 2G to 4G/LTE.  PLDT and Smart have also taken steps to significantly expand network capacity, particularly for data internet transport.  For example, PLDT has increased the capacity of its international cable systems to Singapore, Hong Kong and Japan by a whopping 1 Terabit/s within a few weeks after the start of the enhanced community quarantine (ECQ) measures, significantly increasing capacity for content and traffic coming from overseas.

“The results of these consumer-initiated tests highlight the beneficial impact of the sustained investments we have made in our network infrastructure over the past five years.  As a result, we have been able to ensure that our customers have the best data experience, even amid the global pandemic,” said Mario G. Tamayo, PLDT-Smart senior vice president for Network Planning and Engineering.

“We have achieved this by continuing our network expansion program, particularly by steadily extending the reach and increasing capacity of our 4G/LTE network.  We’ve done this by combining the roll out of our physical installations with software systems upgrades that can be done remotely,” Tamayo said.

In Quezon City, for example, Smart posted Download Speeds of 24.12 Mbps, almost double that of the competing network. This reflects the continuous network upgrade and expansion activities that Smart undertook in the city, including the deployment of LTE-Advanced and carrier aggregation.

For mobile, Speed Score incorporates a measure of each provider’s download and upload speed to rank network speed performance. Tests used to calculate Speed Score exclusively come from devices with ‘Modern Chipsets’, which are devices capable of connecting to the market’s fastest, generally available technology.

For fixed, Ookla assesses the fastest network speeds attained across a given network, accounting for tests that are taken on various Speedtest applications that connect to a fixed network, including tests taken on mobile phones over a Wi-Fi connection. Each top carrier accounts for at least 3% of the sample size in the geographic area.

The latest Ookla awards come amid years of sustained investments in the expansion and upgrade of PLDT and Smart’s network, which has amounted to nearly P260 billion in overall capital expenditure (capex) spend over the past five years. In 2019 alone, the PLDT Group’s capex reached a record Php72.9 billion. Moreover, 2020 capex is expected to reach Php70 billion despite the slowdown in network rollout due to the quarantine controls imposed in the second quarter of this year.

This capex program enabled PLDT and Smart to build the digital infrastructure needed to support the deployment first of 4G/LTE and later 5G. This involved, first of all, the deployment of an extensive optic fiber network. The PLDT Group’s fiber network is the most pervasive in the country and extends to over nearly 360,000 kilometers as of June 2020.

HGLE Coupé by HOFELE - Based on the Mercedes-Benz GLE Coupé