Philam Foundation, the corporate citizenship arm of the country’s premier life insurer Philam Life, has just turned over three new “Philam Paaralan” classrooms to Taguig National High School in Taguig City in a ceremonial turnover on July 9, 2014. Nationwide, 40 new Philam Paaralan classrooms have been turned over to the Department of Education (DepEd). These classrooms will benefit 2,000 students in Typhoon Haiyan and earthquake affected areas.

Able to accommodate 150 students each, these fully furnished classrooms come complete with chairs, blackboards, fans and lighting equipment. Water, sanitation and hygiene facilities are also included in the structure for the implementation of hygiene and health modules for the students.

Philam Foundation Executive Director Max G. Ventura said in an interview during the classrooms’ turnover ceremony, “We have built Philam Paaralan classrooms in Taguig after transferring our corporate offices here. As a new ‘resident’ of the city, we are glad to contribute to providing decent school facilities to the youth of Taguig.”

Established in 1997, Philam Foundation embarked on Philam Paaralan as its flagship program that aims to help improve the quality of education in the Philippines through the construction of classrooms in underprivileged communities including typhoon-devastated provinces.

To date, a total of 23 fully-furnished Philam Paaralan classrooms were constructed in Isabela, Cagayan de Oro, Iligan, Batangas, Compostela Valley and Agusan del Sur. By the end of 2014, Philam Paaralan will have built a total of 60 classrooms, with the completion of 37 classrooms being built in Yolanda-hit areas in the Visayas. 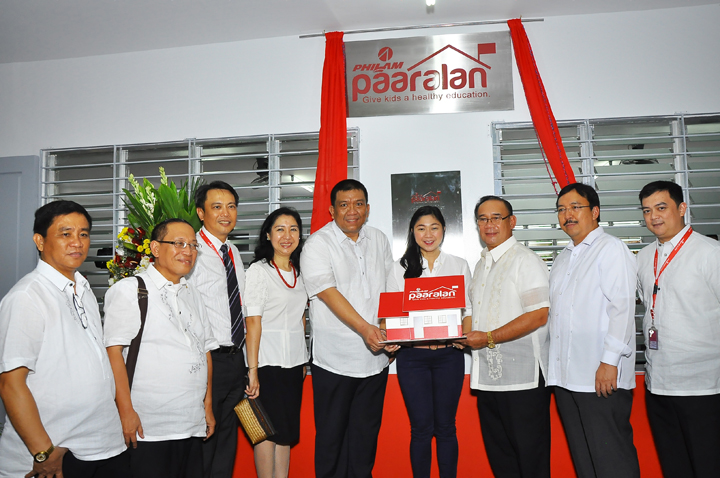 Ventura said Philam Paaralan is finishing the construction of 29 classrooms in the provinces of Bohol, Cebu, Tacloban, Leyte and Samar affected by the super typhoon These are targeted for completion by the end of the first quarter of school year (SY) 2014-2015, while eight classrooms in Negros Occidental, Capiz, Roxas City, Iloilo, Aklan and Roxas are for completion before the year ends.

Ventura also said, “Through Philam Paaralan, the company and our partners are able to contribute to providing a conducive learning environment for children, especially in areas affected by calamities. It is our belief that, as a big part of nation building, education should be prioritized even during disaster recovery efforts.”

Since its launch in 2011, Philam Paaralan has gained support from like-minded organizations that gave cash and in-kind donations to the program. Philam Paaralan’s sponsors include Isla Lipana Foundation, which donated 1,250 chairs; Give2Asia, which donated funds to build 4 classrooms, and Happy Hearts, which gave funds for 16 classrooms.

AIA Group Limited and its subsidiaries (collectively “AIA” or “the Group”) comprise the largest independent publicly listed pan-Asian life insurance group. It has operations in 17 markets in Asia-Pacific – wholly-owned branches and subsidiaries in Hong Kong, Thailand, Singapore, Malaysia, China, Korea, the Philippines, Australia, Indonesia, Taiwan, Vietnam, New Zealand, Macau, Brunei, a 97 per cent subsidiary in Sri Lanka, a 26 per cent joint venture in India and a representative office in Myanmar.

The business that is now AIA was first established in Shanghai over 90 years ago. It is a market leader in the Asia-Pacific region (ex-Japan) based on life insurance premiums and holds leading positions across the majority of its markets. It had total assets of US$147 billion as of 30 November 2013.

AIA meets the savings and protection needs of individuals by offering a range of products and services including life insurance, accidental and health insurance and savings plans. The Group also provides employee benefits, credit life and pension services to corporate clients. Through an extensive network of agents and employees across Asia-Pacific, AIA serves the holders of more than 28 million individual policies and over 16 million participating members of group insurance schemes.

AIA Group Limited is listed on the Main Board of The Stock Exchange of Hong Kong Limited under the stock code “1299” with American Depositary Receipts (Level 1) traded on the over-the-counter market (ticker symbol: “AAGIY”).