The quad camera Huawei Nova 3i (below, left) and Nova 3 (right) were officially launched on July 28 at Glorietta Activity Center (yes, they’re nearly indistinguishable), but the Nova 3 has a faster processor (Kirin 970 vs Krin 710), more RAM (6GB vs 4GB), has a bigger battery (3750 mAh vs 3340 mAh), features a better rear camera set up (24MP Mono + 2MP F2.0 and 4K video vs 16MP + 2MP F2.0) and is priced higher (P25990 vs. P15990). The Nova 3i is also available starting July 28 (those who pre-ordered will get a Bluetooth speaker worth P2,990). The Nova 3, which can be pre-ordered from August 4 to 10 (pre-order buyers get a free premium Bluetooth speaker), will be available on August 11. James Reid is the new Huawei brand ambassador. Specs comparison between Nova 3i and Nova 3 below, with major differences highlighted in orange. You can also find Smart and Globe postpaid plans for the Nova 3i below.

While the Nova 3i may be the most feature-packed quad camera midrange smartphone right now, its beefier spec’d sibling, the Nova 3 steals the show, with 3D curved glass (the Nova 3i has 2.5D glass) and a Kirin 970 processor, the same one inside Huawei flagships such as the P20 / P20 Pro and Mate 10 / Mate 10 Pro. (The P23,990 Honor 10 also runs the same Kirin 970 chip, since Honor is also owned by Huawei, although Honor operates independently. Also, the Honor 10 has 4GB RAM while the Nova 3 has 6GB.) The Nova 3’s GPU is also much better: Mali-G72 MP12 with GPU Turbo compared to the Nova 3i’s Mali-G51 MP4 with GPU Turbo. Also, while both Nova 3 and 3i have face unlock, only the Nova 3 has infrared light to make 3D face unlock work even in low light. Lastly, the camera markings on the rear of both phones differ: Dual Lens on the Nova 3i, and AI Camera on the Nova 3. The Nova 3 is also available at Home Credit for 0 percent (at 6 months or 9 months). 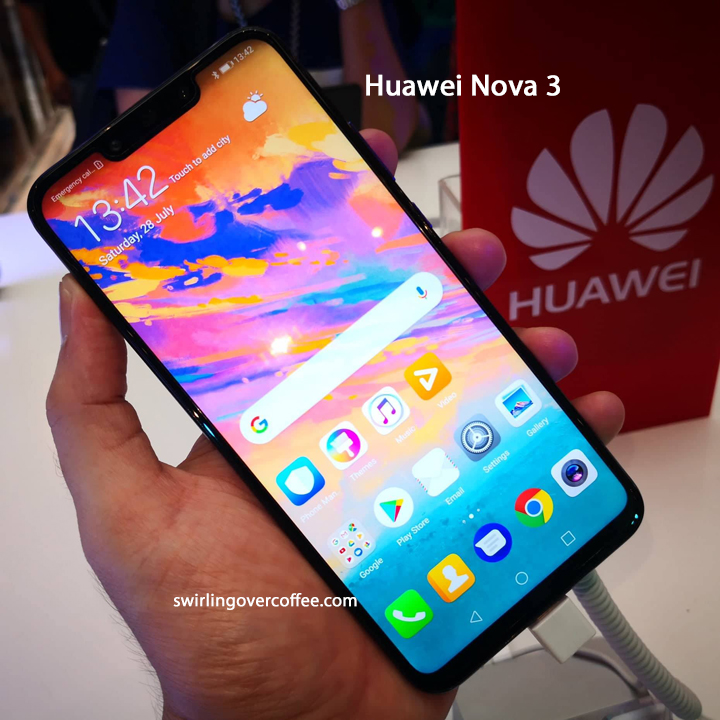 Get the Nova 3i via Postpaid Plans from Smart and Globe

The Huawei Nova 3 and Nova 3i were launched at the Glorietta Activity Area on July 28, 2018.