Philippines, January 10, 2015 – With mobile photography becoming a popular trend among Filipinos, OPPO has launched the world’s first smartphone with an automated swivel camera in the Philippines—the N3.

“The N3 is designed for life with the users in mind,” said Lyla Xu, Overseas Brand Manager for OPPO Philippines. “We are carrying out the OPPO N-series trademark to the N3 to redefine modern smartphone technology.”

According to Xu, the OPPO N-series is engineered to encompass superb functionality, class, and top performance.

The most innovative smartphone camera yet

“We duplicated what the users loved about the N1 to the N3, only better,” Xu said. “All the N series have a rotating camera, but the N3 had an added flavor—it’s the automation.”

The N3’s camera can rotate 206 degrees and is capable of taking pictures using its free-stop and multi-angle shooting features. Camera rotation can also be controlled using gestures, touch access, and O-click function.

OPPO partnered with Schneider Optics, a leader in developing state-of-the-art camera technologies, in engineering the one-of-a-kind camera of the N3.

For shooting panoramic scenes like cityscapes, the N3 has a simple-click function that automatically rotates to capture clear, stable images in both landscape and portrait orientations.

Additionally, the camera comes with a unique target-tracking focus shift function that enables users to change angles while maintaining the quality of their photos and videos.

What’s more, the N3 includes the PI 2.0 plus, OPPO’s market-leading Pure Image processing technology. This system accomplishes the white balance settings, brightness adjustments, auto focus, face recognition, and other actions intelligently. It is equivalent to the experience of using a DSLR camera. 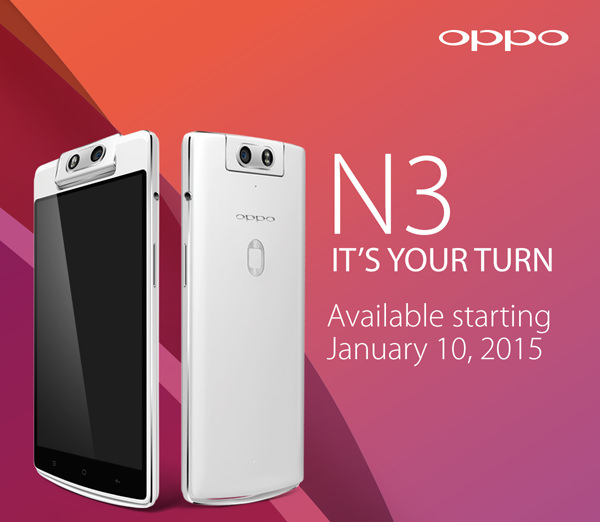 The latest addition to the OPPO N-series also features a hollow underside design that protects the phone whenever it is dropped to a surface. The hollow space between the bottom of the phone and the screen bears the brunt of the impact, protecting the screen and the body from potential damage.

Not only that, the design also has the OPPO skyline notification light 2.0, which takes the form of a polar light that gives notification to consumers whenever they receive a text or email.

For better convenience and protection, the N3 also comes with Touch Access—allowing for higher recognition rates even when users are wearing gloves or their hands are wet.

The OPPO N3 is powered by the Qualcomm Snapdragon 801 quad-core CPU. Packing it with 32G ROM and 2G RAM boxed in a 5.5-inch screen made of Corning Gorilla Glass 3 makes the phone even more durable. It also includes a VOOC mini rapid charging system.

“Charging your N3 for 30 minutes can already provide 75 percent battery life, while a five-minute charge will suffice for a two-hour call,” Xu said.

She concluded: “If you want a high-resolution camera built to capture moments and not pictures, then this is the perfect smartphone for you.”

The suggested retail price for OPPO’s N3 is Php 29,990, and will be available in stores nationwide on January 10. The smartphone is also available in Australia, Bangladesh, Egypt, India, Indonesia, Iran, Malaysia, Myanmar, Pakistan, Singapore, Taiwan, Thailand, the United Arab Emirates and Vietnam and China.

A Year in Freelancer.com: How Millennials are Changing the World

Get the New Colors of BlackBerry Passport at MemoXpress Stores for P29,990

Kata Springboards Its Newest Octa-Core Model with a New Pricetag at Lazada.com.ph

Foodpanda and Globe Creates a Wonderful World for the Riders!