While observing the activity of several cybercriminal groups, Kaspersky Lab researchers have spotted unusual activity in a malicious script, on an infected website, which is putting Android users at risk.

The script usually activates the download of Flash exploits, to attack Windows-users. The script is a set of special instructions for execution in the browser, embedded in the code of the infected website.

However at some point it has been changed so it can check the type of device its victims are using, searching specifically for Android version 4 and older. Spotting the danger, Kaspersky Lab experts decided to delve deeper.

Infecting an Android device is much harder for criminals then infecting a Windows PC. The Windows OS – and a lot of widespread applications for it – contains vulnerabilities that allow malicious code to be executed without any interactions with a user.

This is not generally the case with the Android OS, as any application installation requires confirmation from the owner of an Android device. However, vulnerabilities in the OS can be exploited to bypass this restriction. And, as our researchers discovered during their investigation, this does happen.

The first script was discovered while it was looking for devices operating on the old versions of Android OS. Two more suspicious scripts were also detected subsequently.

The first one is able to send an SMS to any mobile number, while the other creates malicious files on the SD-card of the attacked device. That malicious file is a Trojan, and it has the ability to intercept and send SMS messages.

Both malicious scripts are able to perform actions independently from the Android user: you would only need to occasionally visit an infected website, to be compromised. 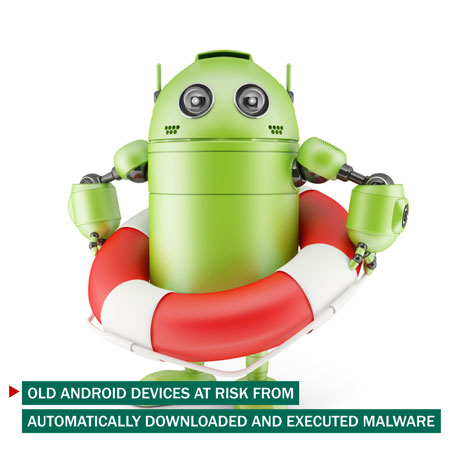 All three vulnerabilities were patched by Google between 2012 and 2014; but the risk of their exploitation still exists.

For example, because of the Android ecosystem characteristics, many vendors producing Android-based devices are releasing the necessary security updates too slowly. Some don’t release updates at all because of the technical obsoleteness of a particular device model.

“The exploitation techniques we’ve found during our research were nothing new but borrowed from proof of concepts, previously published by white hat researchers. This means that vendors of Android devices should account for the fact that the publication of PoCs would inevitably lead to the appearance of “armed” exploits. Users of these devices deserve to be protected with corresponding security updates, even if the devices are no longer being sold at the time,” said Victor Chebyshev, security expert at Kaspersky Lab.

In order to protect yourself from drive-by attacks, Kaspersky Lab experts advise the following:

Read more about drive-by attacks against Android-based devices on Securelist.com.

Kaspersky Lab is the world’s largest privately held vendor of endpoint protection solutions. The company is ranked among the world’s top four vendors of security solutions for endpoint users*. Throughout its more than 15-year history Kaspersky Lab has remained an innovator in IT security and provides effective digital security solutions for large enterprises, SMBs and consumers. Kaspersky Lab, with its holding company registered in the United Kingdom, currently operates in almost 200 countries and territories across the globe, providing protection for over 300 million users worldwide. Learn more at www.kaspersky.com.

* The company was rated fourth in the IDC rating Worldwide Endpoint Security Revenue by Vendor, 2011. The rating was published in the IDC report “Worldwide Endpoint Security 2012–2016 Forecast and 2011 Vendor Shares (IDC #235930, July 2012). The report ranked software vendors according to earnings from sales of endpoint security solutions in 2011.