SINGAPORE —October 2, 2014 — NVIDIA announced today that its NVIDIA® Tegra® mobile processor will power the new Honda Connect in-car audio and information system in the 2015 Honda Civic, Civic Tourer and CR-V, which will be launched in Europe next year.

By integrating the Tegra automotive-grade processor, Honda becomes the 19th global automaker to utilise NVIDIA technology for in-vehicle infotainment applications. The announcement coincided with the first glimpse of these Honda models at the 2014 Mondial de l’Automobile (Paris Auto Show).

“Honda is bringing NVIDIA’s advanced mobile technology to an important new segment of vehicles,” said Rob Csongor, vice president and general manager for Automotive at NVIDIA. “Inside these Honda models, the NVIDIA Tegra solution leverages Android to deliver an open, flexible infotainment platform. One that bridges the world of smartphone apps and the requirements of the automotive industry but, most importantly, does so in a way that makes driving safer.”

NVIDIA and Honda worked together to integrate Android 4.0.4 as the embedded operating system in the 2015 Honda Civic, Civic Tourer and CR-V. NVIDIA brings its extensive experience working with Android in gaming, tablet and TV platforms to automotive applications.

Leveraging the powerful, yet energy-efficient automotive-grade NVIDIA Tegra processor, the Honda Connect infotainment system is easy and intuitive to use. Its fast response to touchscreen gestures like pinch, zoom and swipe provides consumers the same experience that they expect on their smartphones and tablets. 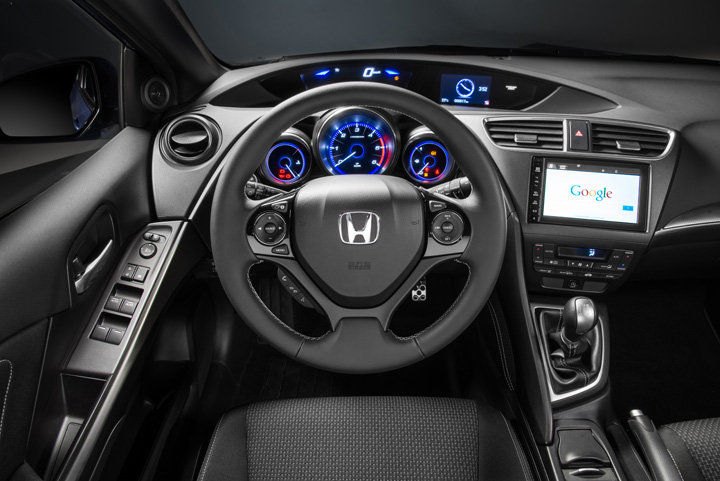 Featuring rich, vibrant graphics and the ability to customize screens, Honda Connect delivers a personal experience to whoever is behind the wheel. The Tegra-powered system drives a 7-inch capacitive touchscreen display for satellite navigation, AM/FM/DAB, rearview camera and vehicle information. Access to the Honda App Center enables compatible apps for use on the touchscreen, such as Aha Radio.

There are currently over 6 million cars with NVIDIA processors on the road today. Another 25 million NVIDIA processors are expected to be integrated into vehicles over the next 5 years. More information on NVIDIA Automotive is available at www.nvidia.com/automotive.

To Keep Current on NVIDIA:

Since 1993, NVIDIA (NASDAQ: NVDA) has pioneered the art and science of visual computing. The company’s technologies are transforming a world of displays into a world of interactive discovery — for everyone from gamers to scientists, and consumers to enterprise customers. More information at http://nvidianews.nvidia.com and http://blogs.nvidia.com.

Get ready for the next-level powerphone! SAMSUNG launches the newest Galaxy Note series in the Philippines