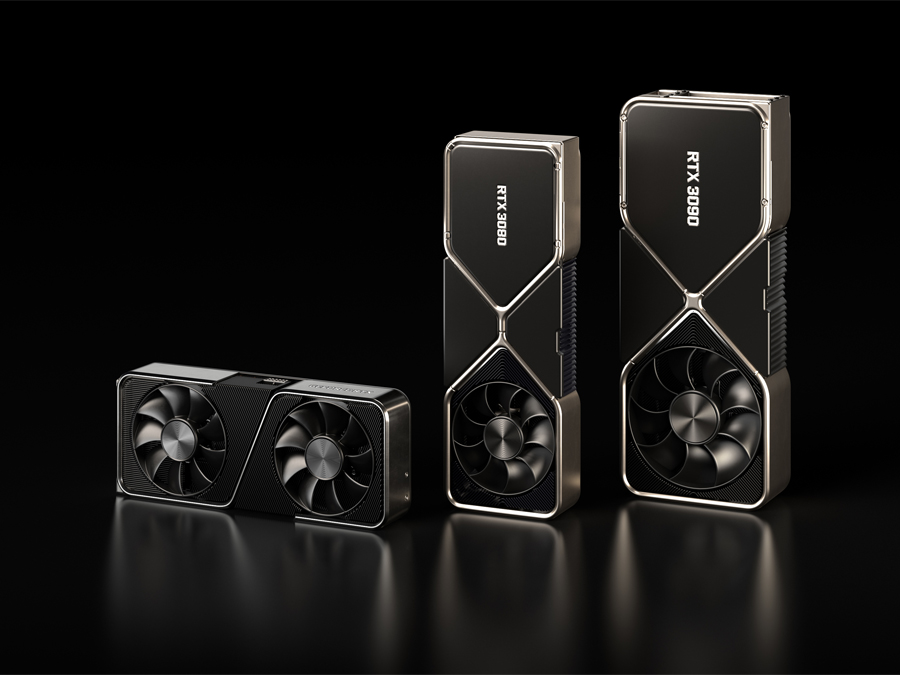 Smashing performance records, the GeForce RTX 3090, 3080 and 3070 GPUs offer up to 2x the performance and 1.9x the power efficiency over the previous Turing-based generation. The GPUs take advantage of the second generation of NVIDIA RTXTM — the world’s most powerful PC gaming platform — to provide unprecedented levels of real-time ray tracing and AI gaming.

“Today’s launch of NVIDIA Ampere GPUs is a giant step into the future,” said Huang. “The work of
thousands of engineering years, the GeForce RTX 30 Series delivers our greatest generational leap ever.

Enabling the blistering performance of the new RTX 30 Series GPUs and the NVIDIA Ampere architecture are cutting-edge technologies and over two decades of graphics R&D, including:

● New streaming multiprocessors: The building block for the world’s fastest, most efficient GPU,
delivering 2x the FP32 throughput of the previous generation, and 30 Shader-TFLOPS of
processing power.

● Third-gen Tensor Cores: New dedicated Tensor Cores, with up to 2x the throughput of the
previous generation, making it faster and more efficient to run AI-powered technologies, like
NVIDIA DLSS, and 238 Tensor-TFLOPS of processing power.

Among other titles already shipping with ray-tracing support are Control, Minecraft with RTX Beta for Windows 10 and Wolfenstein: Youngblood. Additionally, ray tracing is supported in industry-standard APIs, including Microsoft DirectX Raytracing and Vulkan, as well as in the game engines used by developers to create games, including Unreal Engine, Unity, Frostbite, id Tech, Northlight, Luminous Engine, 4A Engine and more.

NVIDIA DLSS, one of the biggest graphics breakthroughs of the past decade, uses the deep learning
neural network powered by RTX Tensor Cores. When enabled, DLSS — which is supported exclusively on GeForce RTX GPUs — improves performance in titles such as Control, Minecraft with RTX for Windows 10 and Death Stranding, while generating images that are comparable to native resolution. DLSS will be heading to Boundary, Bright Memory Infinite, Call of Duty: Black Ops Cold War, Cyberpunk 2077, Fortnite, Ready or Not, Scavengers and Watch Dogs: Legion. For those with more powerful PC configurations, a new Ultra Performance mode enables DLSS to run up to 8K.
New Ways to Play NVIDIA also announced three new technologies designed for enhancing the experiences of gamers, broadcasters, esports professionals, and creators:

• NVIDIA Reflex: Become Instantly More Competitive. Gamers strive for the lowest possible
latency in competitive games because it allows the PC to respond faster to their inputs, enabling
them to play with greater precision. NVIDIA Reflex is a new suite of technologies that optimise
and measure system latency. Among these are NVIDIA Reflex Low-Latency Mode, a technology
being integrated into popular esports games such as Apex Legends, Call of Duty: Warzone,
Fortnite and Valorant that reduces latency by up to 50 percent, and NVIDIA Reflex Latency
Analyzer, which detects input coming from the mouse and then measures the time it takes for
the resulting pixels (for example, a gun muzzle flash) to change on screen. Reflex Latency Analyzer is integrated into new 360Hz NVIDIA G-SYNC® Esports displays arriving this fall from
Acer, Alienware, ASUS and MSI and supported by top esports peripherals from ASUS, Logitech,
Razer and SteelSeries. Measuring system latency has previously been virtually impossible for
gamers to do, requiring over US$7,000 in specialised high-speed cameras and equipment.

• NVIDIA Broadcast: Stream Like a Pro. The world’s 20 million live streamers can turn their
home into a broadcast studio with NVIDIA Broadcast, a universal plugin that enhances the
quality of microphones and webcams with RTX-accelerated AI effects, such as audio noise
removal, virtual background effects and webcam auto frame.

• GeForce RTX 3090 — At the top of the stack is the RTX 3090, priced at US$1,499 and referred to
as the “BFGPU” — Big Ferocious GPU. It even comes with a silencer — a three-slot, dual-axial,
flow-through design that is up to 10x quieter than the TITAN RTX and keeps the GPU up to 30
degrees C cooler. Its 24GB of GDDR6X memory can tackle the toughest AI algorithms and feed
massive, content creation workloads. The RTX 3090 is up to 50 percent faster than the current
ultimate PC graphics card, TITAN RTX, enabling gamers to experience 60 fps in 8K resolution
across many top games.

● Dual-Axial, Flow-Through Thermal Solution — Up to 2x more cooling performance, with a
stunning unibody design. Gamers and creators will be able to enjoy unrivalled performance
while their GPUs simultaneously run cooler and quieter than ever.

● Exquisite Mechanical and Electrical Design — A stronger mechanical structure — with a new
low-profile leaf spring along with a new 12-pin power connector — allows more space for
components and cooling, and is compatible with 8-pin connectors in existing power supplies,
with an included adapter.

● HDMI 2.1 — The increased bandwidth provided by HDMI 2.1 allows, for the first time, a single
cable connection to 8K HDR TVs for ultra-high-resolution gaming.

● AV1 Decode — First discrete GPUs with support for the new AV1 codec, enabling gamers to
watch up to 8K HDR internet video using as much as 50 percent less bandwidth.

The GeForce RTX 3090, 3080 and 3070 GPUs will be available as custom boards, including stock-clocked and factory-overclocked models, from top add-in card providers such as ASUS, Colorful, EVGA, Gainward, Galaxy, Gigabyte, Innovision 3D, MSI, Palit, PNY, and Zotac and as Founders Editions from www.nvidia.com.

For a limited time, gamers who purchase a new GeForce RTX 30 Series GPU or system will receive a PC digital download of Watch Dogs: Legion.

‘Fortnite’ Is RTX On! Real-Time Ray Tracing Comes to One of Most Popular Games on the Planet

Tiger Crackers is the Grocery Find You Need Right Now