The Armed Forces of the Philippines (AFP) is all geared up to hold the 3rd Social Media Summit on July 15, 2016 at the AFP Theater in Camp Aguinaldo, Quezon City.

Spearheaded by the Media and Civil Affairs Group (MCAG) and Civil-Military Operations School (CMO School) of the Civil Relations Service of the AFP (CRSAFP), the conference is aimed at boosting and synergizing AFP’s online initiatives. It will tackle current social media trends and issues as a tool to further enhance online engagement within the Armed Forces and key partner organizations.

The one-day summit, whose theme this year is “Change. Move. Achieve: Moving forward through Social Media,” will cover issues on getting the most out of social media networks and its capabilities in nation–building. Speakers will discuss social media’s relevance to the Philippine society and its potential in strengthening nationalism and public service awareness through AFP’s online presence. 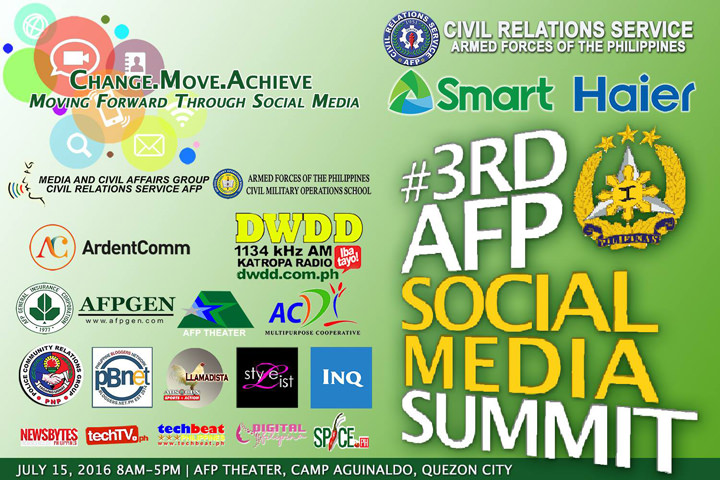 One key topic of discussion is on how social media shaped the 2016 Philippine National Elections.

LTC MICHAEL T AQUINO (INF) PA, MCAG Commander, CRSAFP said: “We have been feeling the power of social media in recent years. We saw how social media impacted the lives of many Filipinos and even the outcome of the 2016 Philippine National Elections. Given the fast-paced advancements and developments in these channels, it is high time for all of us to move forward through social media and utilize its power to achieve our personal and organizational goals.”

On its third year of holding, the Social Media Summit 2016 expects more than 1,200 participants including information officers from various units of the AFP, the Department of National Defense, the Philippine National Police, the Bureau of Jail Management and Penology, the Bureau of Fire Protection, government agencies, and the academic institutions.

Non-governmental and civil society organizations are also invited to attend.

The event is co-presented by Smart Communications and HAIER Philippines. These organizations value the role of social media in promoting the goals of their organizations.

“We have been part of the AFP’s Social Media Summit since the beginning., not only because we are a partner of the AFP. More importantly, we share the AFP’s strategy of connecting and engaging our stakeholders. More and more Filipinos connect to the Internet. With a new administration in place, the 3rd AFP Social Media Summit could potentially be a powerful tool for developing the value of nationalism,” said Wo Rosete, Head of Public Affairs at Smart Communications. 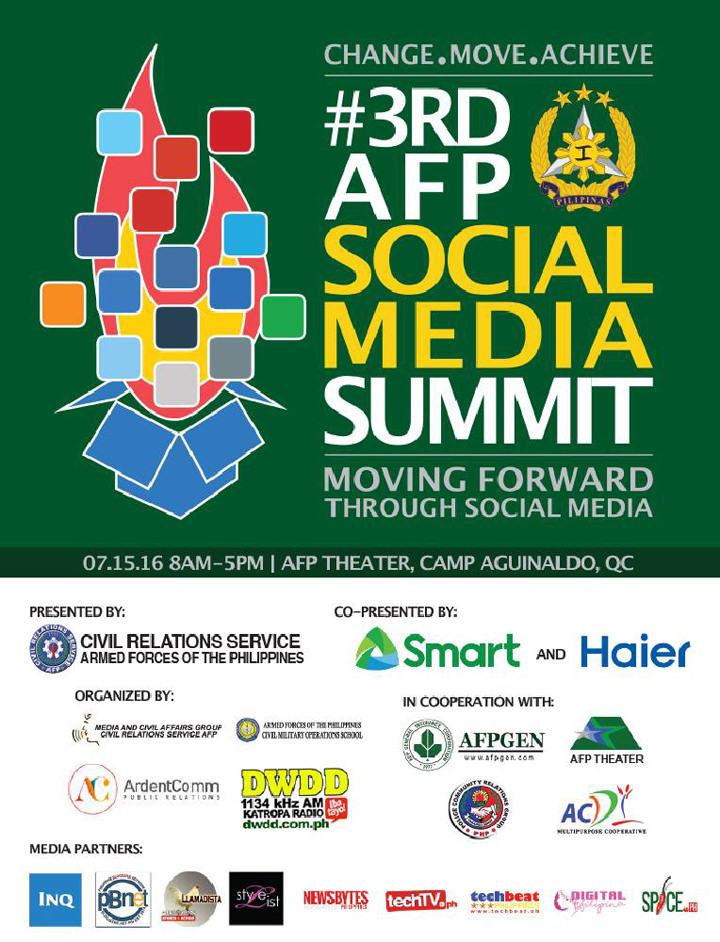 BGEN RHODERICK M PARAYNO AFP, COMMANDER, CRSAFP said, “With about 50% of Filipinos actively engaging in social media networks and the enormous number of people around the world, the Internet has become not just an efficient tool for disseminating information but also the most important venue for connecting to those we in the AFP serve. The 3rd AFP Social Media Summit will tackle how we can optimize the power of social media to connect for change while we actively move forward to achieve the AFP’s organizational goals related to public service.”

Leading marketing communications firm Ardent Communications, Inc. (ArdentComm) has been helping organize the annual event since the first year. According to ArdentComm President Ana Pista, “Filipinos are innately communicative and truly enterprising. Social media is highly prevalent among us, and it has ignited a great wave of changes in our society. ArdentComm is proud to once again take part in this yearly summit. We believe that through the effective utilization of social media, we can harness a renewed sense of nationalism among the Filipinos, making them essential catalysts of change in the society.”

The 3rd AFP Social Media Summit will provide participants the opportunity to get insights on:

More information about the 3rd AFP Social Media Summit can be accessed at http://AFPSocialMediaSummit.dwdd.com.ph/.

Connect with AFP Social Media Summit on Facebook at: https://www.facebook.com/afpsms.

Upholding a Culture of Trustworthiness

The Samsung Galaxy Fold Is Now Available in Select Stores

4 Steps to Setting Up a Secure, Collaborative File Storage System