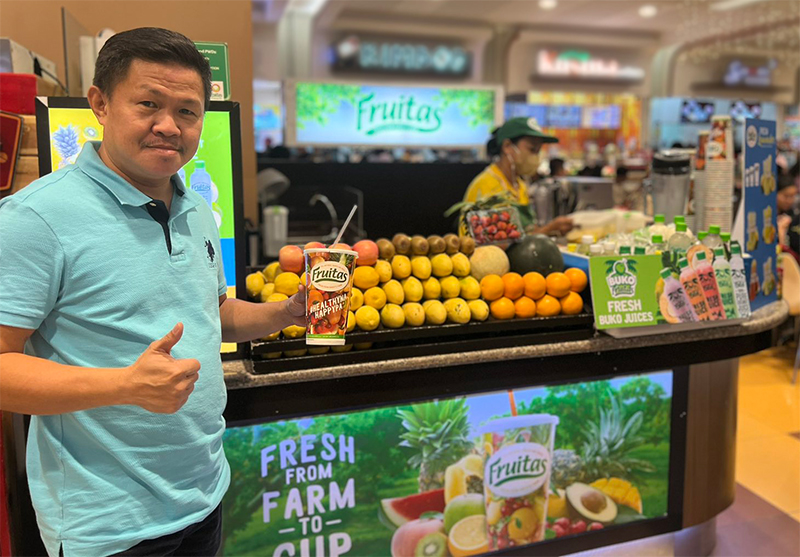 The proverbial first step may always be the hardest, and that holds true as well when it comes to business and aspiring entrepreneurs. But sometimes, all it takes is recognizing opportunity, and taking a chance on it.

Successful frentrepreneurs (franchise entrepreneurs) like Glenn Cosme attest to the rewards of taking the risk, but he doesn’t chalk it up to luck alone. According to Glenn, it takes the right partner to make franchising bear fruit.

It was in 2003 that as a Pharmacy Assistant, Glenn found himself wanting for a successful venture. Business opportunities arrive in many forms and different signs; the most glaring of which Glenn found in a long line of customers in a kiosk, all excited for a refreshing Fruitas shake.

“As it turns out, the idea I was looking for was already there; and when I tried their product, talagang masarap, very refreshing and healthy” Glenn recalled. It was at that moment that he decided to get in touch with the House of Fruitas, become a frentrepreneur, and mark the beginning of his Kwento ng Tagumpay.

Almost two decades after that chance encounter—Glenn’s partnership with the House of Fruitas has remained strong. This connection, according to him, was rooted in how the company opened its doors and assisted him as he established his franchise.

“They were there every step of the way, something I’m still thankful for even now,” said Glenn. “It was everything that a new entrepreneur would need: like logistics, manpower, permits, training and seminars for staff, even marketing and more.”

“The House of Fruitas also went the extra mile with the kind of guidance they offered. They made me feel like they were as eager as I was to make me succeed with my franchise business,” he added.

Since establishing its very first stall in a mall in Manila 20 years ago, the House of Fruitas has grown to hold a recognized presence nationwide. It introduced and established concepts such as Fruitas, De Original Jamaican Pattie, Johnn Lemon, Buko Loco; and now includes new brands such as Balai Pandesal, Soy & Bean, Ling Nam, Keffir Yoghurt Milk Bar, Friends Fries, and Black Pearl.

House of Fruitas Founder and CEO Lester Yu attributed the strength of their franchising to the “frentrepreneur starter kit” that folks like Glenn were welcomed to, which has since then included the edge of “tapping into a nationwide network of brands, both fresh concepts, and flavors already iconic to millions of Filipinos,” Yu noted.

With more brands arriving to the growing franchising industry in the Philippines, it could be easier for aspiring frentrepreneurs to get started. But for Glenn, it’s the right partner, one that already stood the test of time, that can make success truly last.

Start your own Kwento ng Tagumpay today. For more information on how to be a House of Fruitas frentrepreneur, you may visit their website at www.fruitasholdings.com, contact them at 0939-1010-101, or email them at franchise@fruitasholdings.com.

Go crazy on 12-12 with back-to-back discounts and cashbacks when you #ShopPaMore with PayMaya!

Arceus: the enigmatic Pokémon that holds the key to the story is here!

Twitter unveils three conversation themes that are important to Filipinos

PayMaya Fuels a Safe and Rewarding Experience at Petron