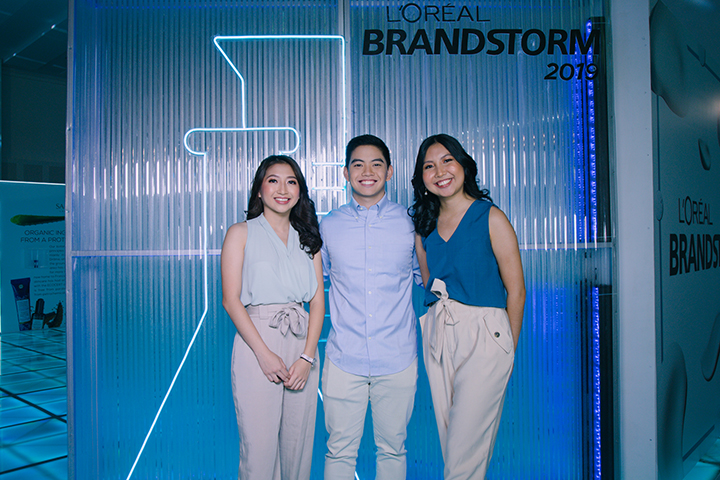 The global winner of Brandstorm will receive the Intrapreneurship Award, which gives them an opportunity to bring their idea to life by joining a three-month immersion program at Station F, the world’s biggest startup campus located in Paris and a partner of L’Oréal.

For the last 27 years, L’Oréal Brandstorm has put business students through real-life situations to reveal skills that are daring, tenacious, innovative, and entrepreneurial in spirit. The competition has launched careers of numerous young talents worldwide, giving them a one-of-a-kind opportunity to grow their career as future leaders of the world’s number beauty company.

L’Oréal Brandstorm is L’Oréal’s signature student business competition that gives students from diverse backgrounds and degree programs a unique opportunity to put themselves in the shoes of an innovation leader for L’Oréal’s international brands. It is one of the largest and most prestigious global business competitions that has attracted over 200,000 students in 65 countries around the world since its creation in 1992.

L’Oréal Brandstorm Philippines was first introduced to university students in the Philippines in 2009. This year, student teams were asked to create a disruptive innovation for skincare to attract and engage health-conscious consumers online and offline. The top eight teams to make it to the finals included:

Brandstorm 2019 Champions: Into Your Genes

Into Your Genes prevailed as the Brandstorm Philippines 2019 Champions. The team is comprised of UP Diliman Business students Annika Bautista, Martin Cruz, and Guia Peralta.

“It’s just surreal,” shares Annika Bautista. “We’ve been working for the last few months to get to this point. It feels like an entire journey was encapsulated in that one moment when we were announced as champions.”

Together, this group of friends developed a skin patch called In Skin. The patch is an answer to issues such as acne and dry skin and works by directly stimulating the user’s DNA. In Skin is directly applied to the skin and can be worn all throughout the day.

“There are so many factors inside your body that can actually create the problems you feel now,” says Guia Peralta. “Our solution taps into that and brings out the best in you by healing you from within.”

“There were times when it was really a struggle because it felt like we were stuck at a dead end,” says Annika Bautista.

Bautista, Peralta, and Cruz are heading to Paris, France for the Brandstorm Worldwide Finals. The team will compete against over 65 countries for the global championship. Should they bag the global championship, Into Your Genes will have the chance to work with L’Oréal experts to test the feasibility of In Skin as an actual product under the L’Oréal Active Cosmetics Division at Station F.

“We are super excited for the new learning process,” adds Martin Cruz. “One of the things we all agree on is that we really learned a lot in this one-of-a-kind experience. Not just with marketing and business, but also with science. And that’s something I think we need to take with us to Paris: the passion to keep researching to come up with better, more feasible ideas.”

Pet Heatstroke is Not a Joke! Pet Food Institute shares tips on how to avoid heatstroke in pets

Have a great day with Australian grapes! Enjoy a sharable sweet treat from Australia. Simple yet satisfying!

Get a Chance to Win an OPPO A83 in our OPPO4U Giveaway Contest!

Why Being a Philam Life Financial Advisor fits Millenials