HOOQ customers have been indulging in a diverse and expansive selection of over 35,000 hours of movies and TV series with hot favorites and award-winning series such as Gotham, The Flash, Mad Men, Ash vs Evil Dead, Nashville and awesome blockbusters, Spider-Man, Kill Bill and Harry Potter. 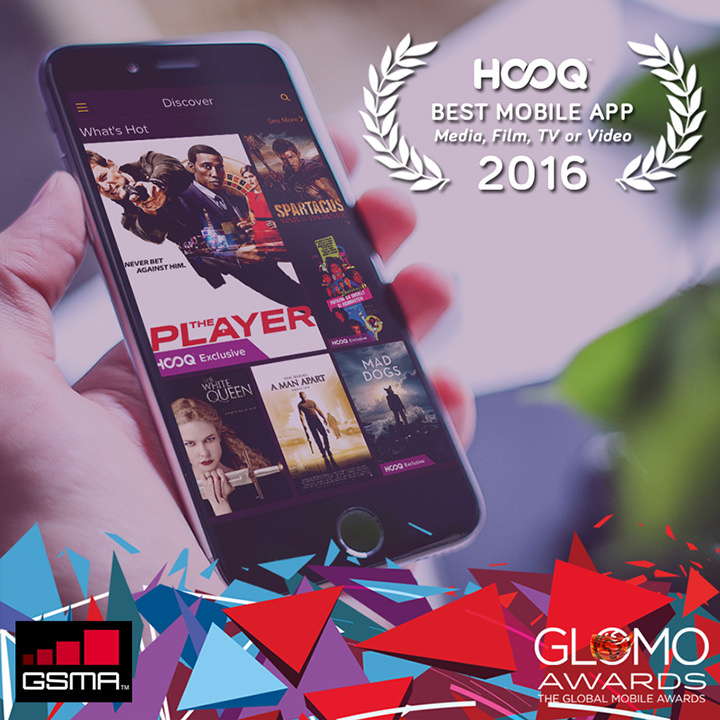 The GLOMO Awards highlights the greatest achievements and innovations across the mobile industry and include more than 40 awards over eight categories. The awards showcase the very best and most compelling apps in the field of multimedia; those that are primarily innovative but also driving eyeballs and audiences from the fixed screen to the mobile screen. The other nominees for the category included; Fjord & Vocento S.A. for ABC mobile web; Magisto for Magisto Video Editor & Mak; Netgem for EETV; and PTCL for PTCL Smart TV App.

“It’s been a great year for us and we are very proud for this award as a validation of our hard work in building an app here in Asia for Asia.  What better gift to us as we celebrate HOOQ’s first birthday!  We look forward to an exciting 2016 and are working very hard to bring to all our customers an even better experience to keep them HOOQ’d!” said Peter Bithos, Chief Executive Officer of HOOQ.    HOOQ launched a year ago in the Philippines, with Globe Telecom as its exclusive telecom partner.

With HOOQ, you can catch the best of Hollywood blockbusters and all-time favorite local dramas on any Internet-enabled device.  Simply download the HOOQ app from the Apple Store or Google Play, sign up or log in, and your device is ready to access HOOQ’s library of Hollywood and local hits.  Viewing movies and TV series on HOOQ is made even better with Chromecast support, now available on the iOS and Android apps.