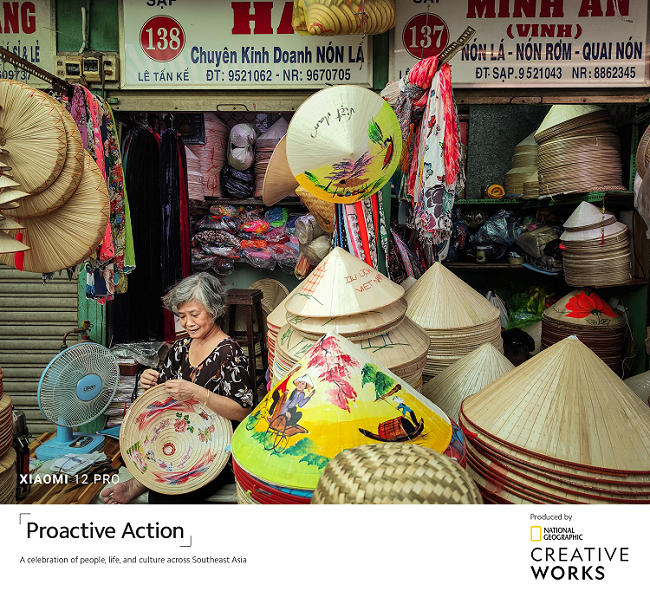 Four notable photographers from Vietnam, Malaysia, the Philippines, and Thailand journey to master every scene with the Xiaomi 12 series.

Xiaomi has brought together four celebrated Southeast Asian visual storytellers – Gab Mejia (from the Philippines), Annice Lyn (from Malaysia), Sirachai “Shin” Arunrugstichai (from Thailand), and Linh Pham (from Vietnam) – to pursue their passion (photography) and tell their stories with the latest Xiaomi 12 series. “Proactive Action”, a campaign produced for Xiaomi by the National Geographic Creative Works, both document

Each photographer tells a story reflecting the local perspective of his or her country. The project not only raises awareness of causes close to the artists’ hearts but also generates interest toward them and preserve their existence (as photos are a form of historical documentation).

“We are excited to work with National Geographic Creative Works on this campaign, as we celebrate the people, lives, and cultures in Southeast Asia,” said KM Leong, General Manager for Southeast Asia of Xiaomi International. ” The Xiaomi 12 Pro, the premium flagship of Xiaomi, can beautifully capture, through its pro-grade triple 50MP camera array, the visual stories of each explorer that will be a part of this campaign. We are excited to see how each featured National Geographic Photographers will master every scene.”

The output from Proactive Action is a series of photos plus a short video that highlights the themes each photographer chose. In these the Xiaomi 12 Pro’s triple 50MP pro-grade camera lenses and its features (ProFocus and Ultra Night Video) were put to the test. The campaign covers social, cultural, and environmental themes that are close to the hearts of the visual storytellers.

Gab Mejia (from the Philippines) brings the Xiaomi 12 Pro to new heights, literally, as he journeys to the highest mountain range in the Northern Philippines, the Cordilleras, and frames the lives of its Mountain People. In the process, Mejia highlights the value of cultural and natural heritage preservation.

Annice Lyn (from Malaysia) documents the work of puppet shadow-play master Wayang Kulit, capturing behind-the-scenes moments of the traditional art form, the craftsmanship in making the puppets, and the performances themselves. Annice aims to raise awareness in bringing families and communities through shadow-play, thereby preserving it socio-cultural value for generations to come.

Sirachai “Shin” Arunrugstichai (from Thailand) photographs one of the largest remaining mangrove forests in eastern Thailand at Prasae Estuary, essentially documenting the successful results of conservation efforts that prevent the degradation of this natural wonder and witness its path to recovery. Shin captures the rich biodiversity of the forest and shows the close link between the local community and its bountiful natural resources.

Linh Pham (from Vietnam) explores the hidden cultural gems of Ho Chi Minh City, the ones not often found in travel guides and blogs. He looks beyond the mundane to visit an unnamed coffee shop under the bridge, a museum with specimens millions of years old, a charming village of mixed Vietnamese and Chinese heritage, and a peaceful fishing island. Linh hopes to preserve the city’s legacy through his alluring visual adventures and share them with the whole world.

The Proactive Action campaign also includes a photography contest called “Xiaomi Photography Academy: A Celebration of People, Life, and Culture across Southeast Asia”. The contest, for those who’d like to use their skills in showcasing their lives and cultures, runs from May 14 to June 14, 2022. Participants are required to own a Redmi or Xiaomi phone and take the best shots that adhere to the theme.

Here are the prizes.

The Grand Prize Winner will take home a Xiaomi Smart Package that includes a Mi TV P1 55″, a Mi Soundbar, a Xiaomi Watch S1, and a Mi Standing Fan 2. He or she will also be announced as a Xiaomi Photography Ambassador. Four consolation prize winners will receive Xiaomi Buds 3 each.

All the winners will be announced on June 17, 2022. For more information on the terms and conditions of the contest, keep visiting the Xiaomi Philippines social media pages.

Learn to Master Every Scene, from the Masters Themselves

The free-to-enter Xiaomi Photography Academy Masterclass will be held at the Masungi Georeserve, a conservation area in the southern Sierra Madre range in Baras, Rizal, on May 14, 2022. Participants will get a chance to meet Gab Mejia, a National Geographic Photographer who’s been using the Xiaomi 12 Pro to take scenic photos. Participants also have a chance to win a Xiaomi Mi-stery Box after the program.

This is the first collab between Xiaomi and the National Geographic Creative Works in Southeast Asia to come up with impressive output produced with the Xiaomi 12 Pro.

Check Out the Huge Price Drops from Your Favorite Brands at the Shopee 8.8 Mega Flash Sale

Why 3G is obsolete and what you can do about it?

Metrobank is the Best Domestic Bank in the Philippines