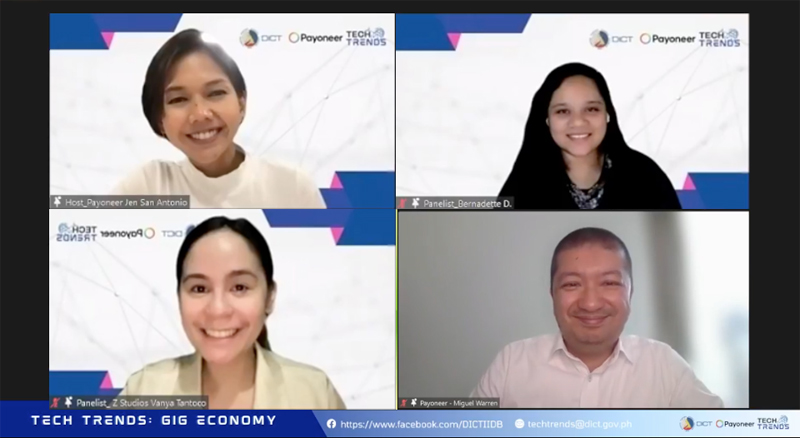 Many Filipinos started freelancing full-time due to the pandemic. Since then, they have discovered and taken advantage of the job flexibility and earning from multiple income streams. These trends along with other key insights on the state of the gig economy in the country was discussed in the webinar held by the Department of Information and Communications Technology (DICT) and Payoneer Philippines.

According to DICT’s Philippine Online Freelancing Industry Study, 43.4% of Filipino freelancers have only been in the freelancing industry for less than a year while 26% have only been part of the gig economy for 1-2 years. However, despite being new in the industry, this new breed of freelancers are not just exploring the local landscape but the international scene as well.

The study shares that 42.9% of Filipino freelancers have overseas clients. This is not surprising since according to Payoneer and GCash’s study called The Philippines Freelance Market 2022 Report, freelancers who serve both local and international clients earn 57% more per hour than those who just work with local clients.

“The emergence of the gig economy has resulted in changes in the current workforce. With greater work-life balance and independence, freelancers were able to work with a diverse range of clients both locally and internationally.” said Payoneer Regional Vice President of South East Asia Miguel Warren during the webinar.

Upskilling and growing your portfolio

The DICT study found that 58.78% of Filipino freelancers were skilled as virtual assistants. About 43% of the respondents claim to have social media marketing skills and 34.8% of them claim to be knowledgeable on content creation. Digital marketing, web research, customer service and tech, as well as, web development and design, online teaching and tutoring, and project management were also among the skill sets mentioned by respondents.

Nurturing skillsets has also been made easy with the wealth of information available online. In fact, 83% of Filipino freelancers self-study to improve their skills by enrolling in free online courses. Aside from a variety of educational opportunities online, there’s also plenty of job resources to choose from such as onlinejobs.ph, indeed, guru, truelancer, craigslist, flexjobs, and upwork.

As freelancing thrives on variety, especially among clientele, transactions can get a bit tricky and this is where Payoneer strives to help and empower freelancers locally and globally. “Payments haven’t always kept up as the world has become more digitally connected. There are numerous obstacles to overcome. Payoneer offers flexibility and accessibility with cross-border payments, making it easier for freelancers to be paid.” Warren noted.

When asked about the major advantages of freelancing, respondents have the following on top of the list: financial stability, more family time, personal and professional growth, flexibility, and source of additional income.

Given the many benefits of freelancing, many Filipinos now prefer this flexible livelihood option that suits their lifestyles better than traditional employment.

“When I got into it, I realized that there’s no traffic, I can work from home, I continued learning the ropes and eventually realized that I can make a career out of this,” shared new freelancer Bernadette Dias.

“With the pandemic, doing freelance work is now more acceptable and open. Many people realized that they can provide their families with their needs, as much as a traditional job but even so much better,” shared seasoned freelancer Vanya Tantoco. Tantoco is also the CEO and Founder of Z Studios Digital Marketing Agency.

Tantoco and Dias also noted that digital platforms have made it easier to find jobs and get paid. As the Philippine government continues to promote entrepreneurship and digital innovation, the study recommends that freelancing communities that foster collaboration with government agencies, LGUs, vendors, and interest groups need to be funded and supported.Learn more about the gig economy in the Philippines by downloading the Philippines Freelance Market 2022 Report at https://paynr.co/PH-freelance-report-2022.

Infinix x PUBGM Cup: Ready your troops this July and get a chance to win P500,000