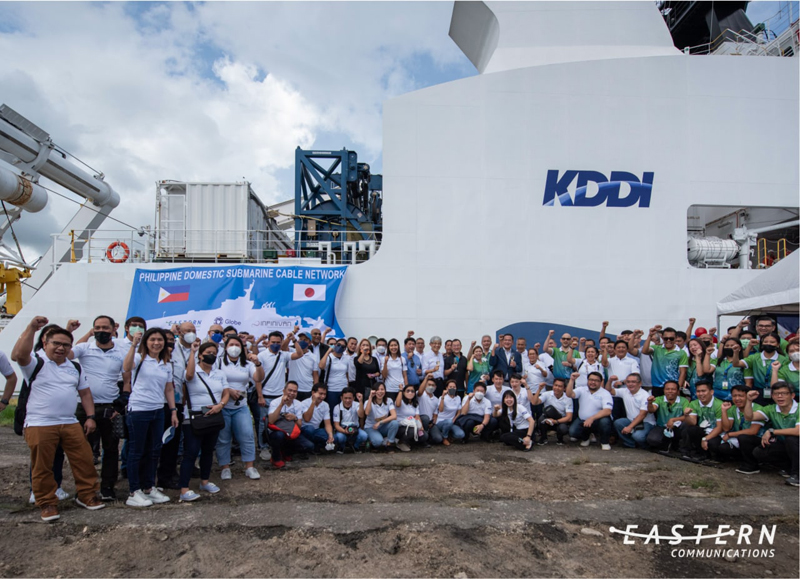 The ship will ferry cables that will cover the PDSCN, which has a total cable distance of roughly 2,500 kilometers or about the same distance between Manila and Singapore. It will be landing at several points across the country, including Sorsogon, Masbate, Marinduque, Camiguin, Siargao, Boracay, and Zamboanga, for undersea laying in 24 segments over the next 9 months.

“We persevered and we’re now almost there. This is the start of the cable laying. This is really exciting, it’s such a beautiful milestone. May we always keep the connections strong,” said Arlene Jallorina, Vice President for Strategic Infrastructure Investments for Globe Business, Enterprise Group.

“We know there may be other challenges along the way. We hope we’ll be able to work through them quickly and very much solidly as a group. We are doing this so that our customers will get equitable access to connectivity, wherever they may be in the country,” said Jallorina at the kickoff event.

Eastern Communications Co-coordinator Vince Tempongko cited the importance of the joint effort to boost life-enabling connectivity across the country.

“What we are doing is not just for Globe, Eastern, or InﬁniVAN but for the Filipino people. Providing equitable access to mobile and internet connection in all parts of

the country has been our dream, and through this cooperation, we are ﬁnally at the cusp of realizing this goal,” Tempongko said.

Eastern Communications Co-coordinator Atty. Aileen Regio shared the many beneﬁts this brings to the Filipino people.

“We are very much hopeful that this project can be the answer that will open doors to great outcomes, solve the many challenges we are facing and be bigger than it already is,” she said.

InﬁniVAN Chief Technology Ofﬁcer Alberto “Abet” Espedido expressed gratitude to the companies and the working team. Together, Eastern Communications, Globe, and InﬁniVAN took the crucial ﬁrst step towards laying the cables after two years of planning and coordination.

“I’d like to thank everyone for their perseverance, professionalism, experience and patience, we were able to get through all the challenges. And now we are ﬁnally starting this project to bring much needed connectivity all over the country,” he said.

Segments for the submarine cable network are expected to be completed by April 2023, and ﬁber connections will be activated thereafter.

PDSCN is in line with the common goal of Eastern Communications, Globe, and InﬁniVAN to expand their coverage across the Philippines to better serve their customers.

Learn more about Eastern Communications via www.eastern.com.ph. For more information on Globe, visit www.globe.com.ph.  And to know all about InﬁniVAN, please visit www.inﬁnivan.com/.

Ninja Van Philippines gears up for the post-pandemic workplace