Government and industry leaders exchanged notes on effective crisis response in a full day summit facilitated by Google Philippines today. The summit focused on the power of collaboration and how technology can help provide citizens with critical information when disasters strike.

Senator Loren Legarda delivered the keynote address at the summit, calling on all stakeholders to work together. “We should all be as vigilant in preparing for calamities as we are in responding to crises,” she said. She also pointed out the need for volunteerism in finding sustainable solutions, emphasizing the higher rate of rehabilitation in communities that were able to come together to plan ahead before calamity struck their towns.

Meryl Stone, representing Google’s Crisis Response team, spoke about the importance of collaboration in preparing for a disaster. “Unfortunately, the Philippines is prone to natural disasters. But the way that volunteers and local authorities have come together to share information around recent disasters has been inspiring. We’re working hard to do our part, improving some of the tools those affected by disasters and local responders have used here in the Philippines and around to world to try to keep people safe. And we are really excited about being here today with so many leaders gathered together to establish a collaborative approach in preparing for the next disaster.”

Rosario Juan, who spearheaded the volunteer group #RescuePH at the height of Typhoon Yolanda, reiterated the value of empowering communities with the technological know-how imparted during the workshop. The #RescuePH team convenes during crisis to create custom maps and develop other apps that help first responders identify flooded areas, critical zones and shelter locations.

The summit began with a technical workshop led by Google engineers from the global Crisis Response team, including hands-on demonstrations of some of the tools that can be used in preparation for a disaster, as well as those that can aid first responders during a crisis. Some of the tools highlighted include: 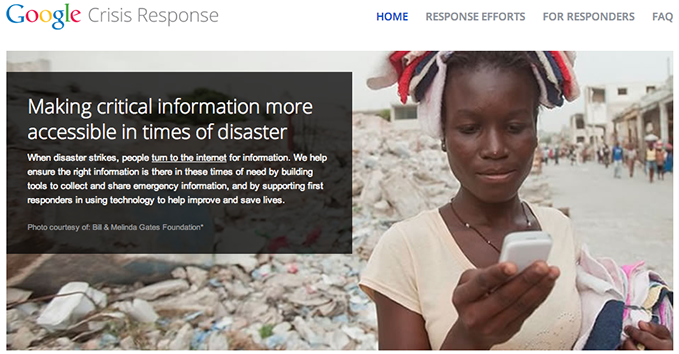 Google is a global technology leader focused on improving the ways people connect with information. Google’s innovations in web search and advertising have made its website a top Internet property and its brand one of the most recognized in the world.

Google is a trademark of Google Inc. All other company and product names may be trademarks of the respective companies with which they are associated.

When disaster strikes, people turn to the internet for information. The Google Crisis Response team helps ensure the right information is there in these times of need by building tools to collect and share emergency information, and by supporting first responders in using technology to help improve and save lives. We’ve been responding to natural disasters since Hurricane Katrina in 2005 by making information such as storm paths, shelter locations, emergency numbers, and donation opportunities easily accessible to people in need. To date, Google Crisis Response team has assisted in roughly 40 emergency situations in more than 20 countries since 2005. Google Crisis Response has also responded to a number of significant disasters in the Philippines, including Typhoon Ondoy/Pepeng, Typhoon Sendong, Southwest Monsoon flooding, Typhoon Pablo, Tropical Storm Maring flooding and Typhoon Yolanda.