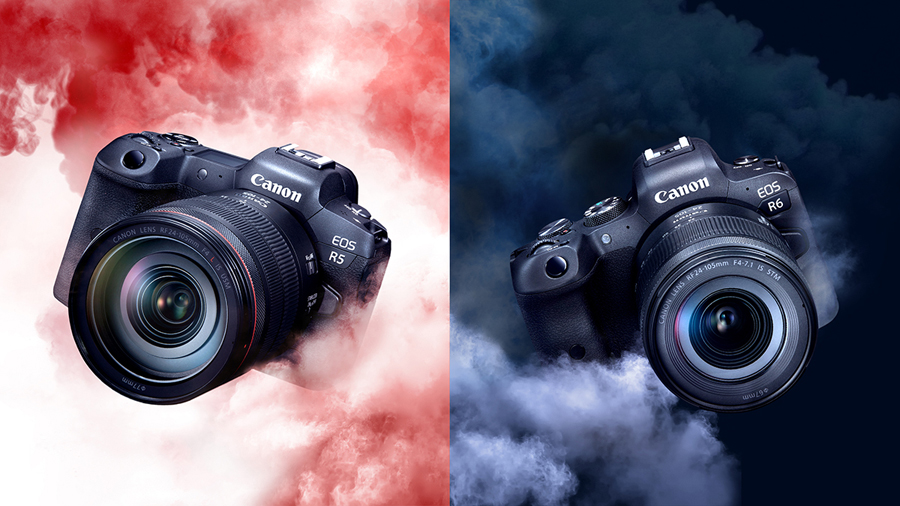 Canon announced the launch of two brand new full-frame mirrorless cameras under the EOS R lineup: the EOS R5 and EOS R6. Aimed at advanced amateurs and professionals, both cameras are designed to provide a high-quality, high-speed shooting experience. Equipped with a new and improved AF system, fast continuous shooting speed of up to 20 fps and in-body IS, the EOS R5 and EOS R6 also come with dual card slots.

“We believe that the EOS R5 and EOS R6 will deliver above and beyond video performance for our advanced and professional users with its breakthrough technologies and features. In particular, the EOS R5 is our first full-frame interchangeable-lens camera with the ability to record 8K videos, which is a remarkable achievement within the camera industry,” said Benny Yu, Head of Consumer Imaging and Information Division, Canon Marketing (Philippines).

Powered by the new DIGIC X image processor, which debuted in the flagship EOS-1DX Mark III, the electronic shutter in both the EOS R5 and EOS R6 is capable of a continuous shooting speed of up to 20fps at full resolution, even with AF and AE tracking. The mechanical shutter is able to shoot at a continuous shooting speed of 12fps as well, placing both cameras among the fastest full-frame mirrorless cameras in the market.

The new DIGIC X imaging processor also has vastly improved noise handling capabilities. Despite having 45 million pixels, the EOS R5’s native ISO can go up to an incredible 51,200, with the option to expand to 102,400. Despite having 50% more pixels compared to the EOS R, the EOS R5 performs better in the ISO department.

The EOS R6 is equipped with a 20-megapixel full-frame sensor, which is inherited from the flagship EOS-1DX Mark III. Sharing the same image sensor and image processor as the EOS-1DX Mark III, the EOS R6 is capable of achieving a native ISO of up to 102,400 (expandable to 204,800).

With the EOS R5 and EOS R6, this proprietary technology has been upgraded to the next generation by enhancing the image-reading speed of the CMOS sensor. The Dual Pixel CMOS AF II coupled with the blazingly fast processing speed of the new DIGIC X imaging processor has brought about several major improvements in auto-focusing capability.

For the first time ever in the EOS lineup, AF coverage area has been expanded to cover the entire sensor (100% x 100%). This means focusing is available on any part of the frame, making focusing on subjects at the far edges a breeze.

Compared to the EOS R, the number of AF points for both cameras during automatic selection has increased sevenfold, to an impressive 1,053 points. Manually selectable AF positions on the EOS R5 is 5,940 while EOS R6 has 6,072, which is 1.5 times more than the EOS-1DX Mark III. With this significant increase, accuracy in AF tracking has improved dramatically.

Face Tracking with Eye Detection AF was first made available in the EOS R and EOS RP. With the new Dual Pixel CMOS AF II, the EOS R5 and EOS R6 can enable AF Priority mode for either people or animals. In addition, the camera is able to recognize not just the body, but head and eyes of the subjects as well. With these advancements in AF, photographers in demanding fields such as sports and bird photography will benefit tremendously.

Not missing a moment even in the dimly lit situation with EOS R5’s low luminance Auto Focus sensitivity of EV -6 and EOS R6 at EV -6.5—a condition so dark that human eye would find difficult to see.

Another first for Canon’s EOS series cameras, both camera bodies of the EOS R5 and EOS R6 incorporate a 5-axis camera-shake blur correction In-Body Image Stabilizer (In-Body IS) function. When used in tandem with an Optical Image Stabilizer (Optical IS)-equipped RF lens, or even with RF lenses that do not have IS, the camera-shake blur reduction is as effective as up to 8-stops decrease in shutter speed. Users would also gain image stabilization when using EF lenses that do not have Optical IS.

A key benefit of this feature is that both cameras can handle a wider range of shooting conditions. For example, photographers can now take a handheld shot of 2 seconds exposure using a RF lens with 100mm focal length, and get a sharp image with fluid water motion, without using a tripod.

The incredible processing power of DIGIC X, coupled with the ultra-fast CFexpress media, enables the EOS R5 to record 8K movies at a smooth 30fps with full sensor readout. Shooting in 8K allows flexibility in cropping during post-production even for 4K delivery, allowing more creative expression through zooming or panning.

In addition, there is an option to record 8K RAW movies internally without any external accessories. The EOS R5 is also capable of recording up to 120fps in 4K as well, a feature that is highly sought after in the industry. A variety of file formats are available, including RAW, H.265 HEVC and H.264 MP4 in either ALL-I or IPB compression.

The EOS R6 is able to shoot 4K videos at up to 60fps, and slow motion at 120fps in Full HD, all without crop similar to EOS R5. The beauty is that Dual Pixel CMOS AF will be available in all resolutions and formats for both EOS R5 and EOS R6. All these video features make the cameras great tools for video makers and hybrid shooters.

External monitoring and recording are available via HDMI port at up to 4K 60fps with 10 bit, 4:2:2 for both cameras. For HDR shooting, both cameras have PQ and Canon log features that allow users flexibility in recording and grading for HDR content.

The EOS R5 houses the most advanced wireless features in any Canon cameras to date. It has native support for both 5GHz and 2.4GHz wireless LAN without the need for any additional accessory, which is a first for a Canon camera. FTP and FTPS data transfer are supported as well. With these connectivity features, photographers can easily transfer image data from the camera to a smart device, PC or even FTP server. If the user requires even faster speeds, or SFTP with secured LAN, the optional WFT-R10 is available. It comes with 2×2 MIMO and wired LAN for faster and more stable connections. The EOS R6 supports only the 2.4GHz band but retains the FTP & FTPS functionality.

Both cameras support Bluetooth Low Energy (BLE) and are the first to work fully with the new image.canon cloud platform. Once configured, and with a Wi-Fi connection established, the camera can automatically upload image and video files and store them in the image.canon cloud for up to 30 days with no limit in size. This includes original RAW files and 8K movies as well. Users can even configure image.canon to automatically transfer original image data to various cloud platforms such as Google Photos, Google Drive or Adobe Creative Cloud.

Intuitive to Handle, Built to Last

Both the EOS R5 and EOS R6 have a magnesium alloy body, as well as dust and drip-proof construction. The camera bodies that are not only lightweight, but also prevent dust and water droplets from entering the camera body as well.

The EOS R5 sports a top LCD panel while EOS R6 has a Mode Dial. The popular Multi-controller and Quick Control Dial, which were available on the EOS 5D series, can be found on both models. This allows quicker selection of AF points and changing of settings on both the EOS R5 and EOS R6.

Both cameras are designed with the Vari-angle LCD with full touch screen convenience during AF and menu selections. The EOS R5 sports a 0.5-inch hi-res Electronic Viewfinder (EVF) with 5.76m dots, which is 1.5 times more than the resolution of EOS R’s EVF. The EOS R6 has a 3.69m dot EVF.

Display refresh rate of the EVF is now at 119.88 / 59.94fps for both cameras, which is twice of the EOS R. The smooth display makes tracking of moving subjects much easier. A new LP-E6NH battery has been created for both cameras, which has 15% higher capacity than LP-E6N, which lets users shoot for longer. Both cameras are compatible with existing LP-E6N and LP-E6 batteries.

The BG-R10 battery grip (sold separately) is an optional accessory equipped with Multi-controller, designed for shooting in vertical orientation. The BG-R10 makes portrait photography easier and has a dust and drip resistant design which matches both cameras. It accommodates two battery units (LP-E6NH, LP-E6N, or LP-E6 batteries), allowing users to continue shooting for even longer periods with less concern about the remaining battery power. When combined with the PD-E1 adapter (sold separately), it is also possible to recharge batteries or supply power to the camera via USB cable.

Portrait, Wildlife and Macro Versatility at Your Fingertips