March 9th, 2015, Manila, Philippines – BIOSTAR has announced the iDEQ-T1 series mini PC is now available to buy in the Philippines. The iDEQ-T1 series is specifically designed to subvert the conventional desktop PC by being smaller, lighter and more mobile but with similar features and capabilities (plus a karaoke function). At just two thirds the surface area of an A4 sized piece of paper and with a weight of only 0.8Kg, the iDEQ-T1, in conjunction with the HTPC platform, is a great solution for a variety of environments needing a small, yet fully-featured, PC.

Inside the iDEQ-T1 the hardware is based on the mini-ITX form factor which allows small and energy efficient solutions because of the affordable and internet centric board design in a compact 17x17cm size. It supports 2 SO-DIMM of DDR3L 1333MHz for up to 16G of RAM capacity and will provide full Intel powered HD Graphics. It also supports BIOSTAR’s BIO-Remote 2 Technology and Charger Booster Technology.

The iDEQ-T1 has some nice BIOS features such as the “RESCUE BIOS”. This allows the BIOS to be automatically loaded into a hard drive. Using the UEFI BIOS design it supports a variety of graphics manipulation operations and BIOSTAR’s research team added the “Super Rescue Function” where if the iDEQ-T1 is attacked by a virus you can recover the BIOS with Super Rescue. 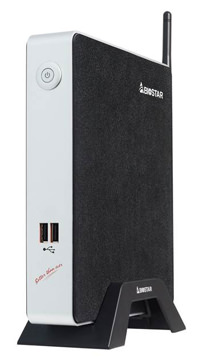 With Intel’s Bay Trail processor you get the Intel Gen7 display chip which can pump out up to 2560×1440 resolution displays with DirectX 11. For the Smart Office situation, the iDEQ-T1 will give you a budget saving quad-core computing based on Intel Celeron N2940 chips. With built-in GIGA LAN and Wi-Fi, It is perfect for office space saving and creating a neat and tidy office area, and ultra speed data transfers are no problem with the USB 3.0 interface.

The iDEQ-T1 also comes with “Hi-Fi K-Bar” software that turns the system into a karaoke machine. The K-BAR software package is an easy-to-use interface that provides a “Karaoke Mode” so that you can sing along anytime, anywhere. Plus with the Magic Voice Mode you can produce multiple sound effects for lots of karaoke fun.

Lastly, placement is easy as the iDEQ-T1 is VESA compliant with a VESA mount with back hanging function. With this you can easily hide the unit behind a monitor or large size TV.