Twenty-two year-old Bernardine edged out 44-year-old Danilo Sajonia at the Don Gregorio Pelaez Sports Complex with 6-3, 6-1 victory. Meanwhile, his sister Sally Mae outclassed Janelle Carmela Llavore of CDO with a score of 6-3, 6-1 in a match that ran for 85 minutes. Llavore bowed to the Cebuana despite registering break serves in the 1st set and aces during the 2nd set.

Sally Mae continued her winning streak by claiming the women’s doubles finals division title in Cagayan de Oro together with her partner, Charise Java. Sally Mae and Java were unstoppable with a 6-1, 6-3 finish over competitors, Llavore and tennis partner, Anjelica Mosqueda.

“I’m very happy I won both divisions in the PPTO CDO leg. Honestly, I did not expect to win because there were so many talented players in the tournament,” Sally Mae Siso said. She also shared that the PPTO CDO leg is her last tennis tournament for the year, and that she’ll be preparing for the national finals next year.

Meanwhile, Bernardine and his teammate Bernan Lou Bering, were aiming for a win, but Sajonia and Lenario Autentico took the crown for the men’s doubles regional finals. Sajonia and Autentico ultimately ruled the court and emerged victors after the 10-4 heart-stopping tie-break set.

Aside from cash prizes from Peugeot Philippines and giveaways from tournament sponsor, Wilson, champions of the PPTO CDO leg will face the other winners of the four (4) other regional qualifying legs in the National Finals to be held in Manila in February 2016. 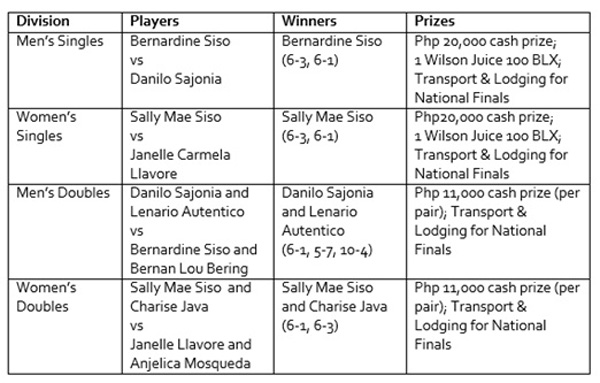 The PPTO will hold its next regional leg in Nueva Ecija from November 2-8, 2015. Filipino tennis players aged 13 and above simply need to head to the nearest Peugeot dealership, regional representatives or visit the official PPTO 2015 website (http://www.peugeottennis.ph) to download the necessary registration and waiver forms. A fee of Php 500 is required to be paid in full when the players check-in on Day 1 to complete their entry in the tournament. Deadline for registration for the Nueva Ecija leg is on October 27, 2015. For other PPTO information, updates and results, players may also visit the tournament’s official Facebook page: https://www.facebook.com/PeugeotPHTennisOpen.

Top 10 Ways Technology and Fitness are the Perfect Training Partners