Grab These Amazing Smartphones for Less than ₱10,000 on Shopee’s 7.7 Sale

Craving for sisig from 35,000 feet above? AirAsia guests flying to, from, and within the Philippines are in for a wonderful treat as Philippines AirAsia today officially started serving hot meals from its newest in-flight menu concept themed “Santan” which replaces AirAsia Café as part of the airline’s latest offerings to enhance customer experience while flying. 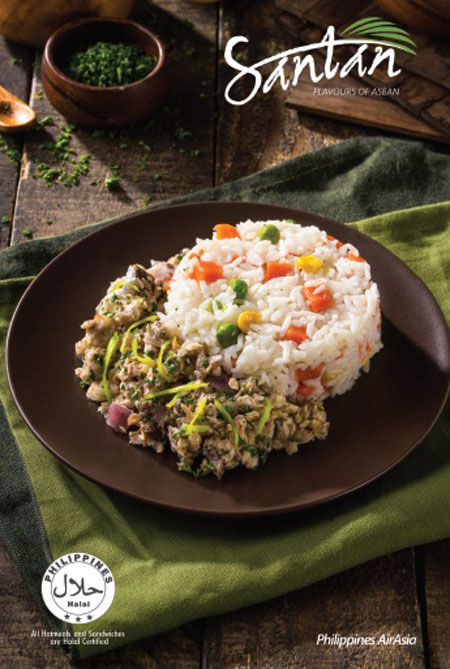 Other delectable dishes also pay tribute to ASEAN flavours such as Nasi Lemak, Chicken Rice, Beef Caldereta and Adobo hence the menu is titled: Santan, an essential ingredient in Malay cooking which refers to the liquid obtained from pressing shredded coconut meat. Santan is thick, creamy and often use as a substitute for butter, cream or soup stock in Asean cooking.

Apart from the new hot meals, guests will be able to choose from variety of sweets with choices such as Lemon Torte, Banoffee Cake, Sinful chocolate cake and chocolate chip cookies from as low as P80 for on-board purchase and at discounted price for pre-booked.

All AirAsia guests are encouraged to pre-book their meals to save up to 20% as compared to purchasing their meals on board, with a guarantee that their preferred meals are available during their flights. Guests who have booked their flights without meals, meanwhile, can easily add them in via the ‘Manage My Booking’ option after logging in to www.airasia.com.

Philippines AirAsia Commercial Head, Gerard Peñaflor said, “We value customer experience at all points of the journey – from the purchase of the ticket to leaving the airport, on board, and onto the destination. This latest enhancement in our in-flight menu makes flying with us also a delightful dining experience.”

PAA operates a fleet of 15 aircraft with domestic and international flights out of Manila, Cebu and Kalibo (gateway to Boracay). It is by far the only local carrier that services the most number of international flights from China and South Korea to Kalibo International Airpor with fly-thru services via Kuala Lumpur from Manila to various points in Asia, Australia and beyond.

Philippines AirAsia is part of the AirAsia Group that has been awarded the World’s Best Low Cost Carrier for seven consecutive years running by Skytrax since 2009 to 2015.

About the AirAsia and AirAsia X Group

AirAsia and AirAsia X are the leading and largest low-cost carriers in Asia, servicing the most extensive network with over 100 destinations across Asia, Australia and the Middle East. Since the inception of AirAsia in 2001 and AirAsia X in 2007, the group has carried over 300 million guests. AirAsia has grown its fleet from just two aircraft to over 170 A320s and proud to be a truly Asean (Association of Southeast Asian Nations) airline with established operations based in Malaysia, Indonesia, Thailand, Philippines, India and Japan. Meanwhile, AirAsia X operates a core fleet of 26 A330-300s, each with a seat configuration of 12 Premium Flatbeds and 365 Economy seats. AirAsia X expanded its regional expansion with Thai AirAsia X operating from Don Mueang International Airport, Thailand and Indonesia AirAsia X operating from Bali, Indonesia. Skytrax named AirAsia as the “World’s Best Low Cost Airline” for seven consecutive years from 2009 – 2015 and awarded AirAsia X for three consecutive years from 2013 – 2015 with the “World’s Best Low Cost Airline Premium Cabin” and “Best Low Cost Airline Premium Seat” at the annual Skytrax World Airline Awards. AirAsia & AirAsia X groups are the first airlines globally to collaborate with INTERPOL to implement the I-Checkit system to screen the passports of all its prospective passengers against information contained in the world police body’s Stolen and Lost Travel Documents (SLTD) database.

Digital Walker and Beyond the Box Wrap Up Your Christmas Lists

GiveMoreWithHuawei grants kids’ Christmas wishes – Over Php 250,000 worth of donations received by children of Concordia

Grab These Amazing Smartphones for Less than ₱10,000 on Shopee’s 7.7 Sale