Manila, Philippines (24 February, 2015) — ASUS Republic of Gamers (ROG) today announced the availability of the ROG GR8 in the Philippines. The GR8 is a console-inspired gaming PC that delivers incredible performance in a compact 2.5-liter chassis. It boasts an Intel® Core™ i7 processor and NVIDIA® GeForce® GTX 750Ti graphics for Full HD gaming and features up to 16GB DDR3L memory, a hard disk drive or high-speed solid state drive (SSD), built-in dual-band 802.11ac Wi-Fi, and comes preinstalled with Windows 8.1. The ROG GR8 also has a built-in Miracast receiver to stream HD content wirelessly from supported Android smart devices or Windows 8.1 PCs directly to a HDTV.

The ROG GR8 features special slide-off covers for easy access to the additional 2.5-inch drive bay and SO-DIMM memory slots for quick upgrades. Its 2.5-liter chassis comes with a matte-black finish, Mayan-inspired detailing, and a pulsing illuminated ROG logo. This compact design is ideal for gamers’ bedrooms and living rooms, and provides an added level of portability when attending LAN parties.

With an Intel Core i7 processor and NVIDIA GeForce GTX 750Ti graphics, the powerful ROG GR8 has the performance to run today’s games in Full HD for a truly immersive gaming experience. It even has 4K/UHD support and can be hooked up to a HDTV through a HDMI or DisplayPort connection for truly vivid visuals. 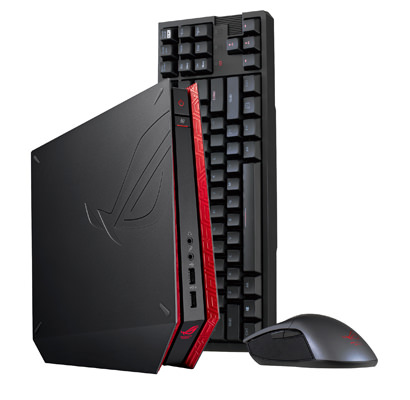 The pre-installed Steam utility lets users download games into the ROG GR8 in just a few clicks. They can even play their PC games on a Full HD TV thanks to Steam Big Picture.

The analog and digital components found in ROG GR8 are physically isolated and separated to keep electromagnetic interference down to a minimum. It uses premium Japanese-made ELNA® audio capacitors that provide warm and natural sound reproduction, and render in-game audio in greater detail.

To help users get the most out of its incredible audio hardware, ROG GR8 features a powerful collection of audio solutions, including Sonic SenseAmp, Sonic SoundStage, Sonic Studio, and Sonic Radar II. Sonic SenseAmp automatically adjusts the built-in amplifier to match headphone impedance for pitch-perfect sound.

Sonic SoundStage lets gamers select the best audio settings for their favorite game genres in real time. This can be done via software, or purely though hardware via the BIOS menu; it does this without the help of the OS or drivers. Sonic SoundStage even works great with SteamOS.
Sonic Studio is a tuning suite that features one-click Virtual Surround for 7.1-channel audio, even on 2-channel stereo headsets. It even lets users control Reverb, Bass Boost, Equalizer, Voice Clarity and Smart EQ settings as well for amazing sound. Sonic Radar II features an on-screen overlay that shows the relative position of gunshots, footsteps and other sound effects to give gamers an aural advantage on the battlefield.

ROG GR8 features a user-friendly upgradable design, with special slide-off covers for easy access to the additional hard disk expansion and memory bays for quick upgrades. ROG GR8 is energy-efficient too, drawing less than 15W at idle, and is whisper-quiet at just 20dB at idle and 28dB when running at full capacity —perfect for the living room or bedroom. Inside, ROG GR8 has a dedicated large-scale fan and copper heat sinks that direct heat away from the CPU and GPU for maximum cooling.

ROG Gladius is a wired optical gaming mouse that gives gamers a competitive advantage in FPS games. It features ultra-durable Omron switches with the exclusive easy-swap switch socket design for customizable click resistance, a two-level DPI switch, slide-to-press side switches, and a 6400DPI optical sensor that tracks up to 200 inches per second and 50g acceleration.

ASUS ROG GR8 is available in PC Express stores nationwide, and has an SRP of PhP 57,990. The ASUS ROG GR8 comes with an ROG Gladius Mouse and an ASUS M801 Mechanical Keyboard.

Inkjet vs Laser: Choose the Right Printer for Your Home or Small Office

Shoot photos like a pro with the OPPO N3