A fine arts student form the University of the Philippines was recently declared as the winner in a nationwide arts contest dubbed “DigiPinoy” organized by Globe Telecom venture company AdSpark, an advertising solutions provider for local and global brands. 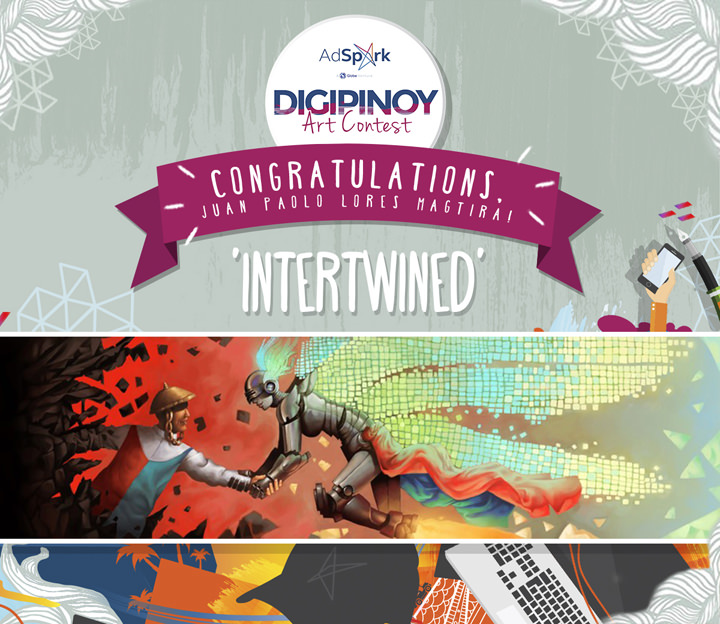 Juan Paolo L. Magtira’s artwork, titled Intertwined, was picked as winner for the art contest for its sheer beauty and artistry. “His entry was a unanimous choice among the judges out of 39 entries in the contest,” said Jean Lander Agor, marketing and creatives associate director at AdSpark.

“His piece was judged based on how well it exemplified the theme DigiPinoy, its originality and artistic merit. Intertwined will be displayed as a mural at the Creative Wall for the AdSpark office,” the company statement said.

Magtira is a graduating student of Visual Communication program of the College of Fine Arts in UP Diliman.

The description for his entry read:

This image depicts the ‘love story’ between man and technology; technology (represented by a robotic woman) is connected to man in an effort to foster advancement. To allow man to live efficiently and easier by removing his own limitations which is depicted by stones that cover his body (a reference to ‘stone age’ that connotes a primitive way of living). A robotic woman is chosen as symbolism because women are the conduits for the gift of birth; the concept being that women have the ability to create an entirely new essence. This can be compared to the technological advancements that can push mankind, or to be more specific our country the Philippines, to greater heights. Someday we may be free from our innate weaknesses; to live up to our infinite potential as a race granted with the gift of technology.

“The theme DigiPinoy delves on the concept of how Filipinos are impacted by the rise of technology and how going digital is shaping the Filipino culture while preserving our age old traditions,” AdSpark statement said.

According to AdSpark, “Social media and other digital platforms have profoundly transformed the way we carry on with our lives, especially for us Filipinos. It has opened up the possibilities of discovering new information, sharing ideas and revolutionizing how we interact with one another and the world around us. Among those in the frontline of the most digital savvy people in the world are the youth.”

Prizes for the winner include P10,000 cash, a Macbook Pro and 6-month paid internship at AdSpark. A formal awarding ceremony is being scheduled this month.