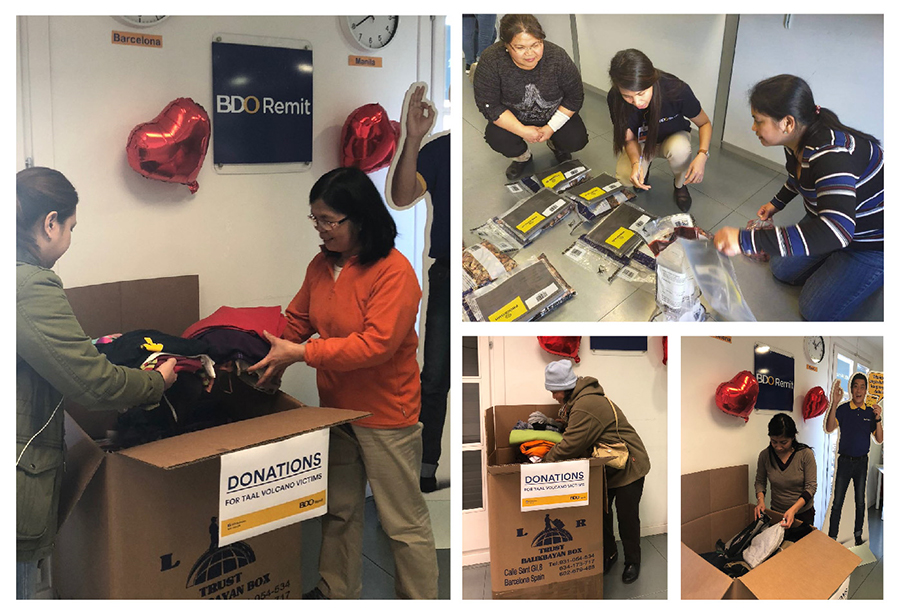 DONATION DRIVE FOR TAAL VICTIMS. Members of the Filipino community in Barcelona do their part in donating in kind to the victims of the Taal eruption, as facilitated by BDO Remit Spain.
archive, Lifestyle

With more overseas Filipinos still wanting to extend their helping hand to their kababayans adversely affected by the Taal eruption, BDO Remit has extended its free remittance campaign on cash donations sent until end-June this year.

As of end-January, BDO Remit has collected more than P600,000 in cash donations from overseas Filipinos, remitted to different accredited foundations. Bulk of this came from the United States, Japan, and the Middle East.

According to Genie T. Gloria, senior vice president and head of remittance of BDO, inquiries and requests (to extend the campaign) are pouring in from different Filipinos communities abroad.

“There are still those who want to donate. With this extension, at least they can still catch up and avail of the free remittance fee when they donate to the Taal victims. Even though the COVID-19 epidemic has grabbed everybody’s attention now, the fact of the matter is the problems caused by the Taal eruption are still present. It’s still a long time before they fully recover,” she said. “If we tell Filipinos abroad that their donations are free (of fees), they are more encouraged to donate, thus, the more people we can help.”

The remittance free campaign on cash donations to Taal victims started on January 14 and is in effect originally until March 31, 2020.

Gloria explained that Filipinos’ inherent bayanihan spirit, wherever they may be, shines through in times like this.

This complements the advocacy of BDO Remit to waive the remittance fees whenever the country is beleaguered by natural calamities.

Earlier, BDO’s remittance office in Barcelona, Spain has organized a donation drive to the distressed victims of the Taal eruption by putting up drop-off boxes for Filipinos who want to donate in kind.

These donation boxes will then be delivered to BDO’s corporate social responsibility arm—BDO Foundation—for distribution to the affected areas. Filipinos living in Barcelona are mostly from Batangas and Cavite, areas that continue to bear the brunt of the volcanic eruption.