Home > Tech > To 4G and Beyond! Bringing world class mobile connectivity to the Philippines

To 4G and Beyond! Bringing world class mobile connectivity to the Philippines

More than two decades have passed since Filipinos embraced en masse the mobile phone. What started out as a luxury device for a few has evolved into an indispensable tool for daily living for everyone. At first, for calling, and, then calling and texting. Today, the mobile phone is now the most widely used internet device.

That’s why mobile data networks have become so important. One such technology that has moved to centre stage is 4G or LTE — short for Long Term Evolution, the fastest, commercially available mobile data service in the world. Since it was introduced in a little over a decade ago, LTE has gradually gained ground all over the world. 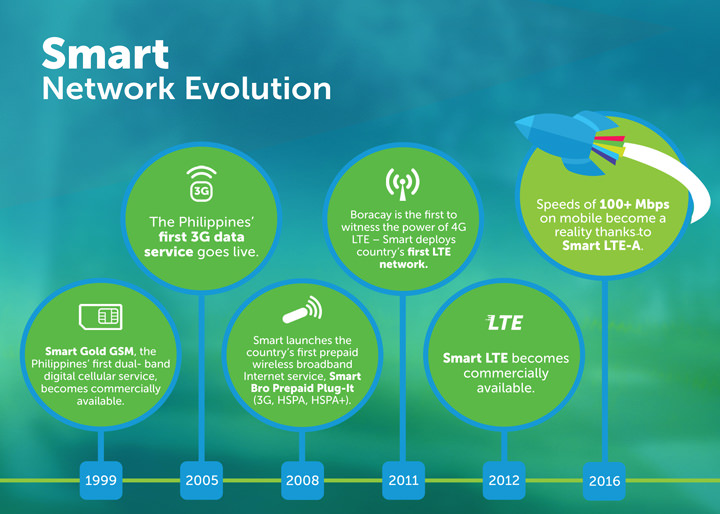 Not to be left behind, the Philippines, too, is turning to LTE as well. First fired up in the country by wireless leader Smart Communications, Inc. in November 2011, it has enabled a growing number of Filipinos to enjoy high-speed mobile broadband.

Smart’s efforts to introduce and propagate LTE has greatly contributed to the increasing presence and acceptance of 4G connectivity.

Five years on and Smart continues to reach out to Filipinos of all classes, offering the widest array of LTE-capable devices from the high end Apple iPhone and Samsung Galaxy S series to the affordable O+ Presto 700 LTE that costs only P2,188 .

With a total of 23 LTE smartphones in its lineup, Smart LTE can be enjoyed on both prepaid and postpaid with affordable bundles such as GigaSurf 50 which comes with 1GB of data that subscribers can use for all apps and sites (plus 300MB for iflix, YouTube and more) for only P50, valid for 3 days. Now, there are truly more reasons than ever to experience the fastest mobile technology in the world.

Even bigger changes are afoot as the next phase of LTE called LTE-Advanced (LTE-A) now begins rolling out in the country. Smart is once more at the forefront of this evolution officially firing up the service in April of this year, and along with it the introduction of the 700MHz frequency which greatly improves the coverage and consistency of high-speed 4G data services.

Watch out for Brother’s ‘Scratch and Win’ roadshow promo, tradeshows

AIA Delivers Excellent Growth in the First Half of 2016

Not for the Weak, Thrills of the Week