Home > Recent > The Sky-Rise of Droppers: Phishing and Malware Attacks Surface Amid Premiere of Famous Space-Saga 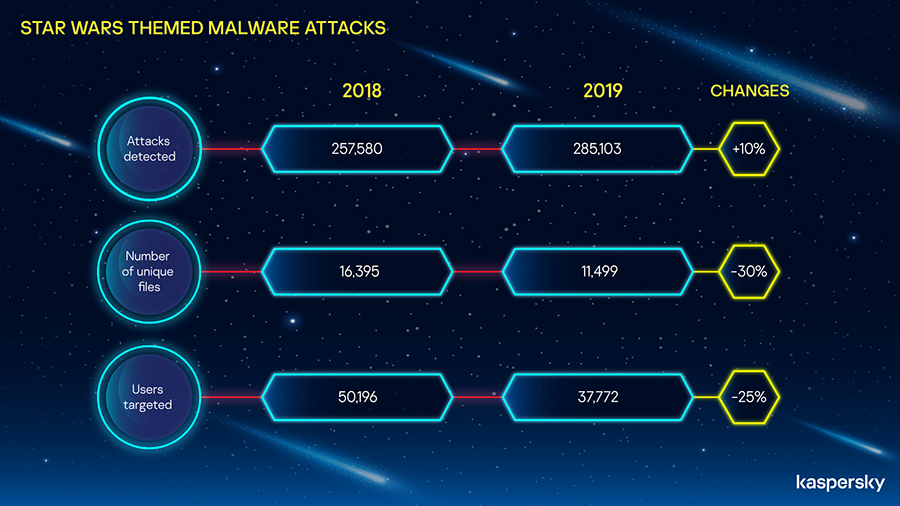 Popular films are often used by cybercriminals as bait to distribute malware, and the latest movie saga from “a galaxy far, far away” is no exception. This year, the latest, and last film of the sequel’s trilogy, has drawn the attention of attackers even before the premiere, with fraudulent websites and malicious files of the yet-to-be-released film flooding the web.

Films are one of the main forms of entertainment users seek to access for free, which creates fertile soil for cyberattacks. Online streaming, torrents and other methods of digital distribution often infringe upon content copyright, and yet they still remain popular as a source of free content. Torrent-trackers and illegal streaming platforms pose a threat to users’ cyber-safety as they can host malicious files, masked behind the name of movie recordings and files. Given this tendency, Kaspersky studied how the world-famous sci-fi franchise’s name is being abused by cybercriminals in order to fool fans of the Rebel Alliance.

Public attention on “Star Wars: The Rise of Skywalker”, which premiered in the Philippines last December 20,  was already attracting cybercriminals even before it was shown. Kaspersky researchers found over 30 fraudulent websites and social media profiles disguised as official movie accounts (the actual number of these sites may be much higher) that supposedly distribute free copies of the latest film in the franchise. These websites collect unwary users’ credit card data, under the pretense of necessary registration on the portal.

The domains of websites used for gathering personal data and spreading malicious files usually copy the official name of the film and provide thorough descriptions and supporting content, thereby fooling users into believing that the website is in some way connected to the official film. Such practice is called “black SEO” which enables criminals to promote phishing websites high up in search engine results (such results often show up for search terms such as “name-of-the-film watch free”). To further support the promotion of fraudulent websites, cybercriminals also set up Twitter and other social media accounts, where they distribute links to the content. Coupled with malicious files shared on torrents, this brings the criminals results. So far, 83 users have already been affected by 65 malicious files disguised as copies of the upcoming movie.

Phishing is not the only way in which cybercriminals tend to utilize popular film franchises. Just as with popular TV shows, they often disguise malicious programs as yet another episode of the story. In 2019, Kaspersky detected 285,103 attempts to infect 37,772 users seeking to watch movies of the renowned space-opera series, signifying a 10% rise compared to last year. The number of unique files used to target the users amounted to 11,499 – a 30% drop on last year. The data shows that even years after the film’s premiere, a significant number of users will still seek to download malicious files in the hope of watching the famous space adventures for free.

“It is typical for fraudsters and cybercriminals to try to capitalize on popular topics, and ‘Star Wars’ is a good example of such a theme this month. As attackers manage to push malicious websites and content up in the search results, fans need to remain cautious at all times. We advise users not to fall for such scams and instead enjoy the end of the saga on the big screen,” said Tatiana Sidorina, security researcher at Kaspersky.

• Don’t click on suspicious links, such as those promising an early view of a new film. Check movie release dates in the cinema and keep track of them

• Look at the downloaded file extension. Even if you are going to download a video file from a source you consider trusted and legitimate, the file should have an .avi, .mkv or .mp4 extension among other video formats, definitely not .exe

• Check the website’s authenticity. Do not visit websites allowing you to watch a movie until you are sure that they are legitimate and start with ‘https’. Confirm that the website is genuine, by double-checking the format of the URL or the spelling of the company name, reading reviews about it and checking the domains’ registration data before starting downloads

• Use a reliable security solution, such as Kaspersky Security Cloud, for comprehensive protection from a wide range of threats