Home > Recent > The power of coming home: A Filipino company encourages employees to go home early to be with their families

The power of coming home: A Filipino company encourages employees to go home early to be with their families

From the small side streets to the country’s major highways, it’s almost a given nowadays for people to experience traffic—with a 30-minute ride turning into a nightmarish 2 hours, especially during the dreaded rush hours.

Because of this, hardworking employees lose precious time. They get home too late for dinner. Worse, they would inevitably have less energy for family bonding. Consequently, family members seem to have less time to catch up on each other’s lives.

Such is unfortunate because according to a study conducted by Debra Manchester MacMannis, the author of the renowned “How’s Your Family Really Doing?”, family dinners play an important part in the development of both children and teenagers because the presence of a parent is pivotal in building them up to be better individuals. The study showed that sharing meals as a family has been found to give kids a boost in the classroom, improve language skills, increase communication, and overall promote better adjustment of kids. 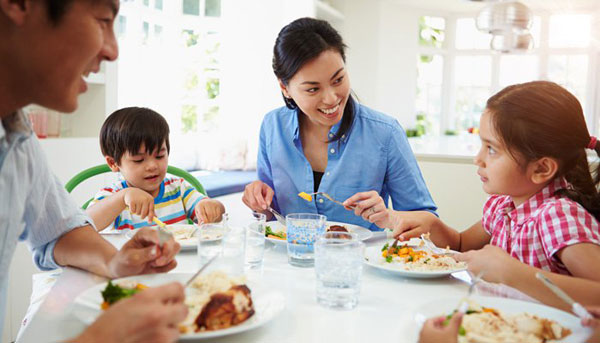 With a keen understanding of its employees and their needs outside of work, Del Monte Philippines launched an important corporate initiative–COME HOME TO FAMILY WEDNESDATES– through which the company encouraged its Manila-based employees to leave the office no later than 6:00 PM at least once a week so they can have ample time to travel and make it home in time for family dinners.

A testament to its success

With the program in place for over a year now, Del Monte employees have consistently shared pleasant experiences resulting from the initiative.

“At first there was a bit of hesitation from the employees. It was weird being asked to go home early for Wednesdates,” Gladys Chua, Accounts Payable Supervisor, shared, “but when we complied, we realized it had very positive results. By going home earlier, I realized I can avoid the traffic a bit, so I can get home in time to cook food for my son. Cooking for him and sharing our Wednesdates dinner has become some sort of mini- tradition for us now.”

Walter Conti, Del Monte’s Customers Activation Manager, along with his wife and kid, has religiously spent Wednesdate with the family since the initiative was first launched. “We bond better now, and all of uslook forward to it. Along with encouraging us to go home early at least once a week, we also get proposed recipes from Del Monte Kitchenomics that we can prepare and share during our Family Wednesdates. We also enjoy taking pictures of our dinners together and posting them online.”

Ryanne Villanueva, Del Monte’s Demand Management Head, is also a mother to a five year old. Having always relied on her nanny to prepare dinner for them, she shares that she’s able to personally prepare dinner for her child at least once a week. Sometimes, he even helps her out in the preparation. “It increases our bonding moments from the time we prepare to the time he goes to sleep,” she says. “It’s the type of policy that I think every other company should have. From the workforce perspective, work hours are deliberately maximized so employees can get out before 6:00 pm. In fact, I wish it wouldn’t be just Wednesdays, but everyday if possible. If we can do it on Wednesdays, we should be able to do it on other days.”

“The advocacy may have started as a Del Monte Tomato Sauce campaign, but we at Del Monte Philippines are very deliberate about walking our talk.” Eileen Manuel-Asuncion, Group Head for Marketing explains. “When the campaign launched, we knew we cannot advocate once-a-week family date nights for Filipino families without deliberately espousing the same among our employees. Soon after, we implemented the 6:00 pm lights out at the Del Monte Manila offices. By 6:00 pm every Wednesday, everyone has to be out of the office so they can get home in time to be with their families.”

As Del Monte employees can attest to, coming home to have dinner with the family—despite the challenges nowadays–is possible. Down the line, Del Monte hopes to do its part in helping strengthen family bonds over good meals across a broader scale–one Filipino home, one Filipino family at a time.

Del Monte Philippines, Inc. (DMPI) is a leading producer of pineapple and other food products.
The company markets over 100 processed food and beverage variants, where it is the leader in almost all the major categories, including packaged pineapple (slices, tidbits, chunks), tropical mixes, 100% pineapple juice and juice drinks and tomato-based sauces (tomato sauce, catsup, spaghetti sauce).
Today, Del Monte Philippines operates the largest integrated pineapple operation in the world. The company grows pineapple across 20,000 hectares that span from Bukidnon to Misamis Oriental, supplying one-tenth of the canned pineapple products worldwide.

PLDT HOME Introduces the Most Advanced Telpad for Your Connected Home