Home > Tech > Tech Guide: Here’s the Ultimate List to Have in Mind When Looking for That Perfect Smartphone for You

Tech Guide: Here’s the Ultimate List to Have in Mind When Looking for That Perfect Smartphone for You

In this modern digital age, even the tech-savvy among us admit that they too can get easily get lost in the sea of products and devices that are advertised to be the supposed latest ‘game-changer’ in the tech industry. And as such, nowadays one must be even more vigilant in choosing what kind of smartphone that can really keep up with his basic needs.

And though many may say that making that decision is easily more said than done, on the contrary, one only actually needs to just look for certain essential factors that should be present for you to get that perfect smartphone experience attuned to your lifestyle.

And with the Holiday rush clearly in full-swing already, we are out to lend a helping hand by conveniently listing down and summarizing these factors into the four basic yet important must-haves – some often overlooked – that would make just anyone and everyone’s lives easier when deciding what particular smartphone they should purchase.

At the end of this brief and informative article, you will surprise yourself by now wisely knowing what specific factors and features you would first want to consider before purchasing that smartphone really meant for you.

Choose a smartphone with at least 1GB RAM 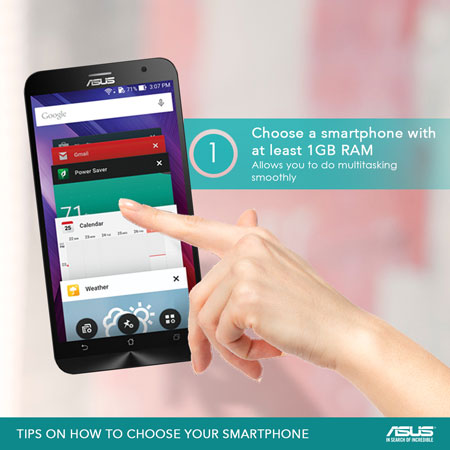 Random Access Memory, or RAM, is the smartphone part that few of us think about, and yet it’s absolutely vital to everything we do. If your smartphone lacks memory then your stuff will soon slow to a crawl — and that’s why we recommended a smartphone with at least 1GB of RAM. Why 1GB? Because apps are always growing in size, so you need enough memory to run everything you want.

Consider Facebook — that’s about 70MB alone. Now launch Twitter, and that’s another 60MB or so. Instragram? That needs around 30MB. And all that just for starters! Now think of everything else you might use on a daily basis! You can see how quickly it all adds up — and that’s before you think about any documents you might open in these apps, or pictures you might view, or games you might play, or what Android needs for itself. So, RAM’s really important — now let’s break down a bit more…

With a 1GB smartphone, such as any ASUS ZenFone model, you’ll have plenty of RAM to spare — even with all these apps running. On a lesser model, with just 512MB of memory, you’ll pretty much have reached the limit! 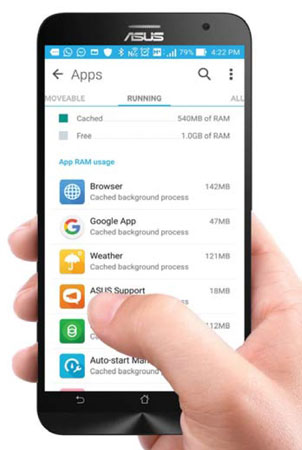 If you think you’ll need more RAM and even better performance then consider a smartphone with 2GB RAM or more. The Android 5 (Lollipop) operating system, for instance, gobbles up loads of of memory just for itself — so 2GB gives Android and everything else on your smartphone more room to work. Also, some of the newest applications out there demand a lot of memory to run properly. So, remembering our table above, a smartphone with 2GB RAM would leave you 1.6GB left to run more apps — and that’s plenty for most things you’ll want to do! 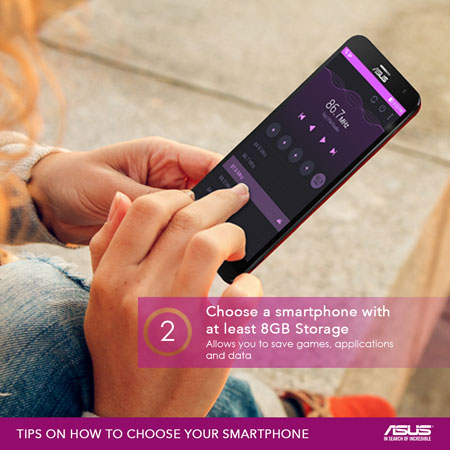 As with RAM, it might surprise you to learn that many affordable smartphones are fitted with only 4GB of internal storage — and honestly, that’s just not enough nowadays. Why? Well, we’re happy to explain…

Now this example below considers an 8GB smartphone with lots of popular apps in use and with typical storage requirements, leaving a comfortable 2GB of storage remaining to play with. Now imagine this same suite of apps on a 4GB handset — and you’ll see why you need to avoid such devices! 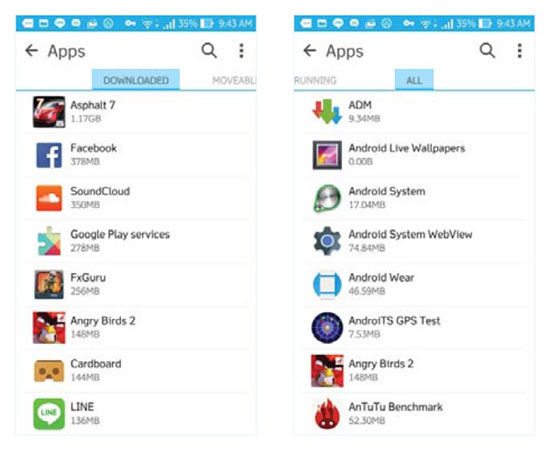 Only with this about of storage will you be able to download, install and run the apps you want, and allow them the space they need to expand as you use them. It’s also the only way to ensure you’ll be able to update to newer versions of Android, when they become available. And while we’re here, we should say that ideally you should go for a device with more than 8GB of storage — but now you understand why 8GB is the absolute minimum! 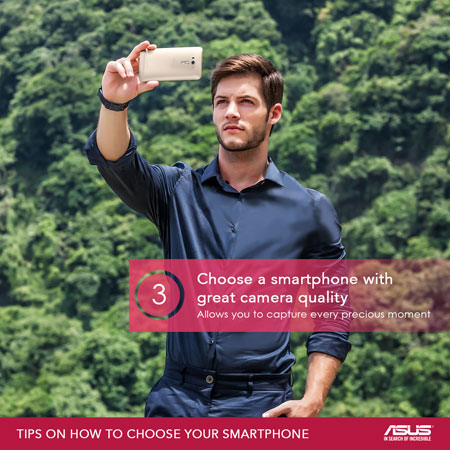 For most of us, our smartphone camera is now our main camera. Because we now take it with us wherever we go, it is essential to choose a smartphone with a great camera — and great camera features! So, while the megapixel (MP) resolution is important, there’s more to grabbing a great smartphone snapper. Here’s what to shop for:

Choose a smartphone with a long battery life 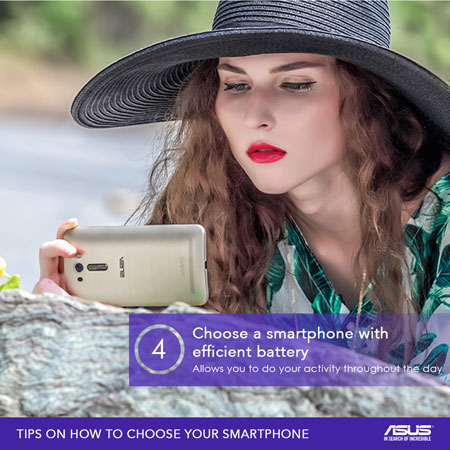 And finally… the battery! It’s the forgotten black brick that takes up most of the room inside your smartphone, and yet it’s the part that powers everything — so you need one with both the juice and durability to do everything you need. Here’s what you need to know:

For the latest information on the ASUS ZenFone 2 product portfolio series, may refer to http://bit.ly/IncredibleHolidaysMobile.

2016 opens up a new world of tech possibilities