Funds are tight for a lot of us, so it makes sense to wait for the prices of flagship Androids – even if they’re last year’s – to go down, and for long-usage-reviews to pop up, before jumping in to buy. That’s the spirit behind this review of Sony’s 2013 flagship, the Sony Xperia Z1. If you’re a Sony Xperia fan eyeing the P33k Xperia Z2, perhaps it makes sense to ask if the now P20k Z1 is still good? 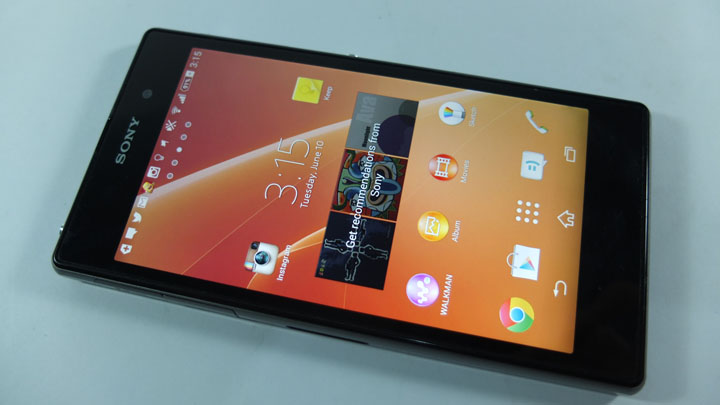 I own last year’s LG flagship, whose low light shooting prowess I’ve proven. But every time I hold the Xperia Z1 I keep wishing my G2 had its svelte UI and premium tactile solid glass feel. And right there is a key allure of a Sony Xperia flagship – a sense of something premium: the feel and heft in your hand (no flimsy flexing plastic), how impressively-lovely-black the unit looks on a dinner table (even when it’s off), and Sony’s own design language (especially the small touches on Kitkat) on its UI overlay. 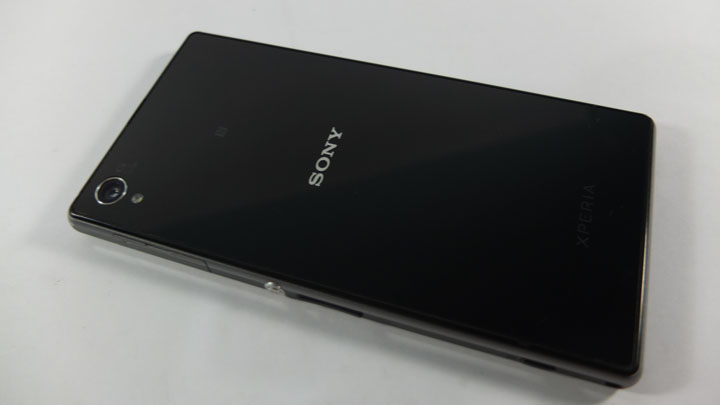 In dim lighting, I won’t be the first one to mistake the back of the Xperia Z1 for its front. Haha. 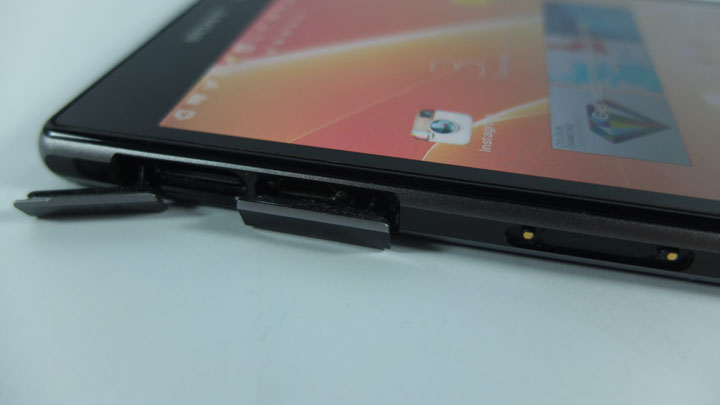 The flap covering the charging port, below the flap for the microSD card tray, loosens up over time if you keep opening and closing it, which is what you’d do when you charge the Z1. The work around is to get a charging cradle that charges the Z1 via its exposed contact points so you won’t need to open the charging port flap. Or MacGyver it with adhesive tape. 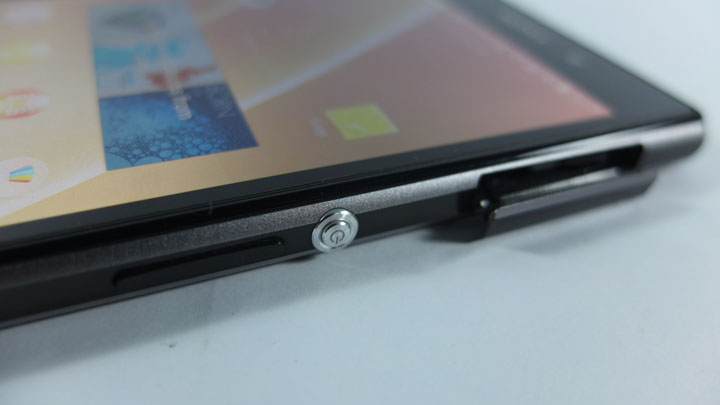 The power button is placed where it feels right, about midway on the right side. Because it’s rounded and protruded, you won’t be mistaking it by feel for any other button. There’s an often unnoticed physical shutter key below the power button, too. 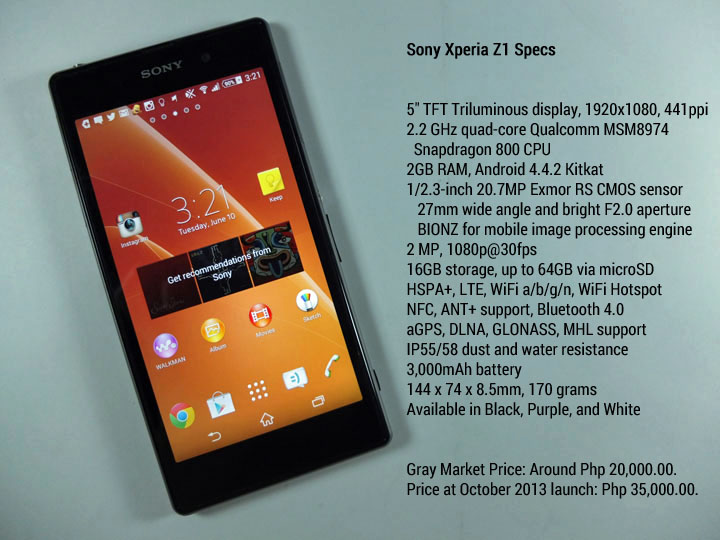 It’s hard to find another Android this Sony beautiful (maybe some bias right there). No matter how often you pull up the too-expensive complaint, put the back-to-back glass and metal-framed Z1 in your hand and then touch other plastic /polycarbonate shell’d flagships and you “know” you’re getting something premium. I’m not discounting that other phones can approach plastic in an artful way, but there’s something about the slight heft in your hand that’s caused by glass and metal.

Even if your prefer a smaller handset, you can’t deny how lovely the Z1 feels in your hand: turn it around, thumb the power button to wake it up, swipe it to unlock. No plastic, good display, no lags. 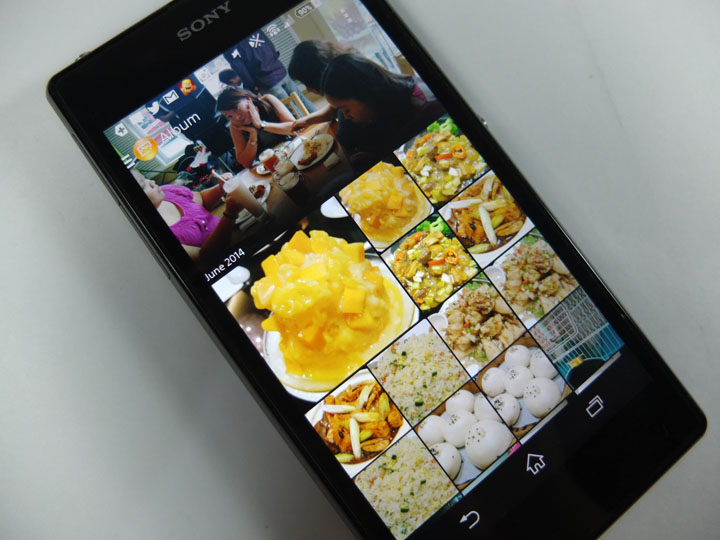 The display is improved from the previous Xperia flagship, the Xperia Z, with a bit punchier colors and a more forgiving side viewing angles. Despite the screen’s 441 ppi, when set side by side against a punchier screen’d LG G2, the Xperia Z1’s will look a bit washed out. But it’s not as bad as it sounds, as you can see in the shots on this post. 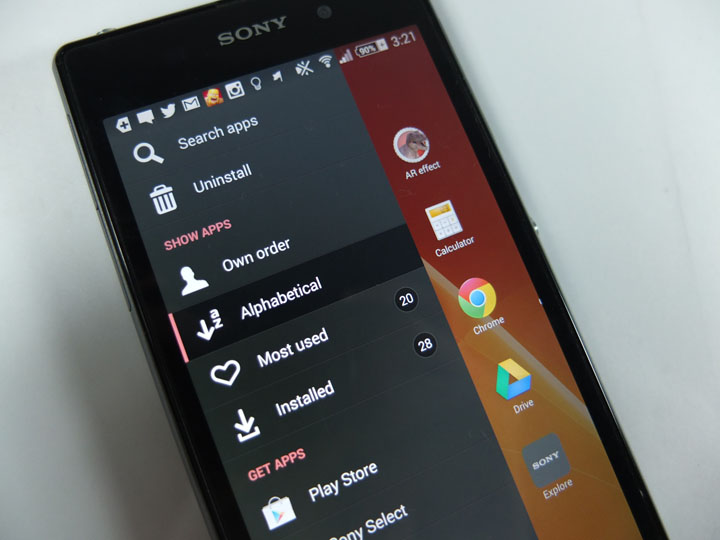 Sony’s UI overlay is lovely – the attention to typography and “dense” icons plus a heavy pixel per inch of 441 make you feel like you’re watching a mix between an exquisite Play Station menu and a high brow magazine. By contrast, LG’s current (at least in the LG G2) Optimus UI is bland and limp.

The Sony Xperia Z1 is spec’d enough to run any game or play any movie. No hiccup, no stutter, no lags. We could talk all day about benchmarks but point is, do you notice problems when loading and switching between apps? No. 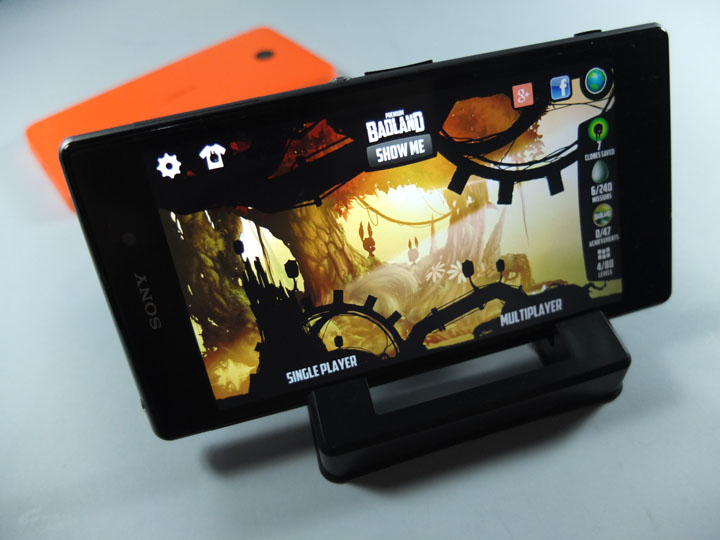 Badland is a game where constantly tapping the screen lifts up your character as you avoid obstacles and move forward, in side scrolling fashion, clearing one stage at a time. Tapping the glass screen constantly on a phone this solid feels “reassuring”. Colors are great, too, as you can see.

And that’s a big thing. I can only speak from having used the Z1 for a month, as well as show you the sample shots (below) on this post. 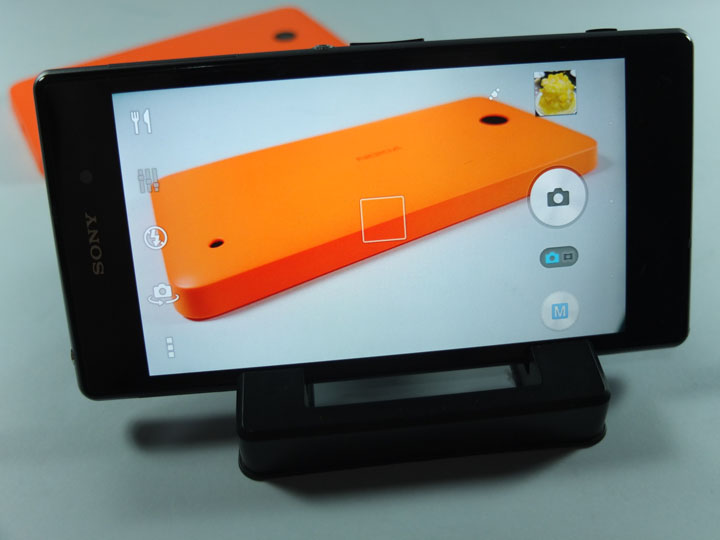 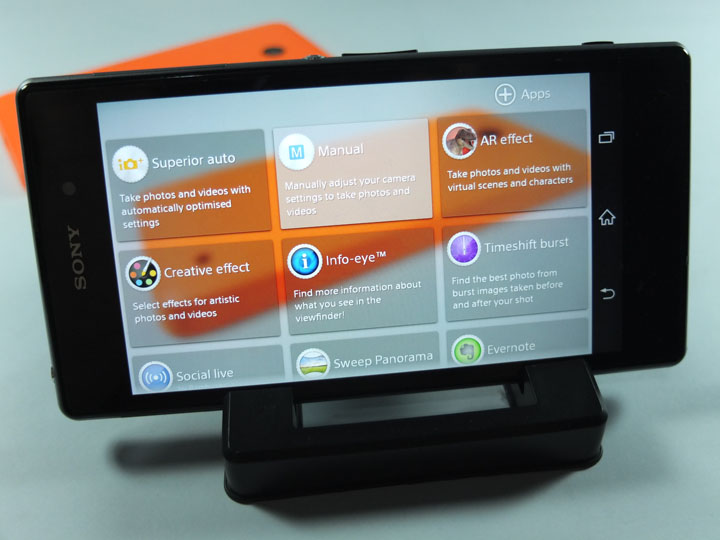 Some “creative” features of the stock Xperia Z1 camera. Doubt you’d use them everyday, but it’s good that they’re there.

The stock camera UI seems suggestive on getting you to try out the gimmicky features (to me at least), like AR effect (lets you take pics and vids with virtual scenes and characters), Creative Effect (filters and blur effects you can apply on pics and vids), Info-eye (find info about what you see on the viewfinder), and Social Live (where you can share live on Facebook what you video record). On the bright side, you can ignore these. 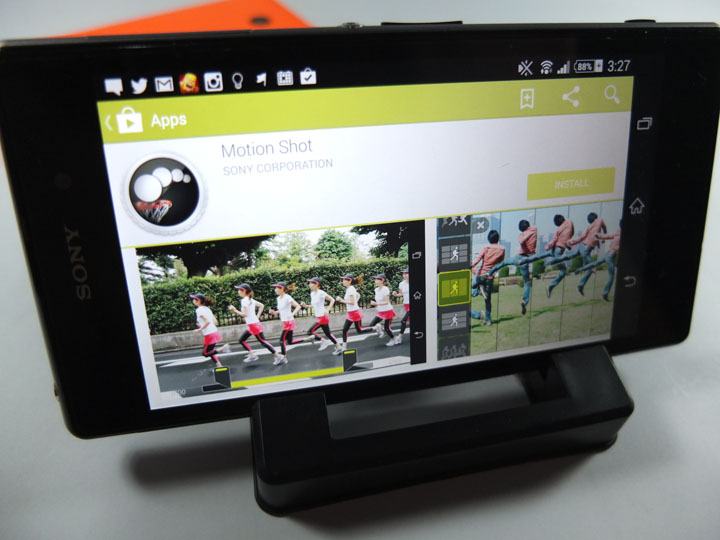 Also, you can add more “apps” inside the camera, like Motion Shot (above), which does what Nokia Lumia cams do. 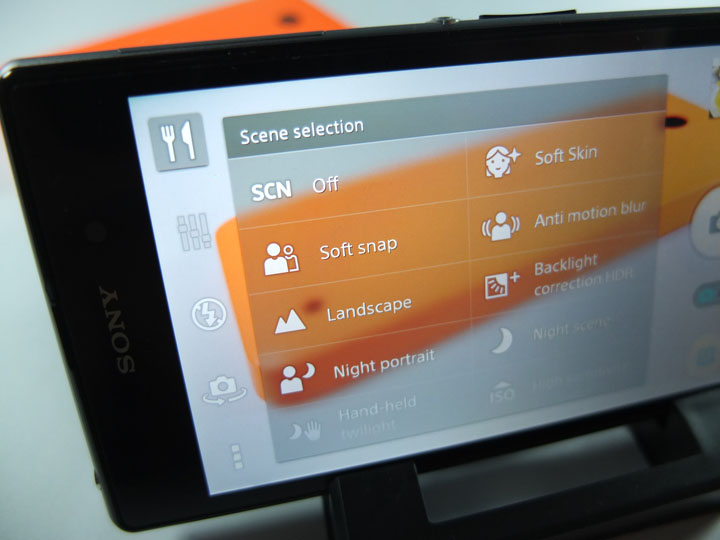 You’ll want to explore the scene selection options under Settings as it covers (see above) most shooting scenarios. See shooting tips below for details.

As long as the flaps covering the microSD card, charging port, and SIM tray are closed, the Z1 is effectively water and dust-proof. So keep those flaps closed. How many P20k premium Androids are there that have waterproofing and a great camera? Not many. 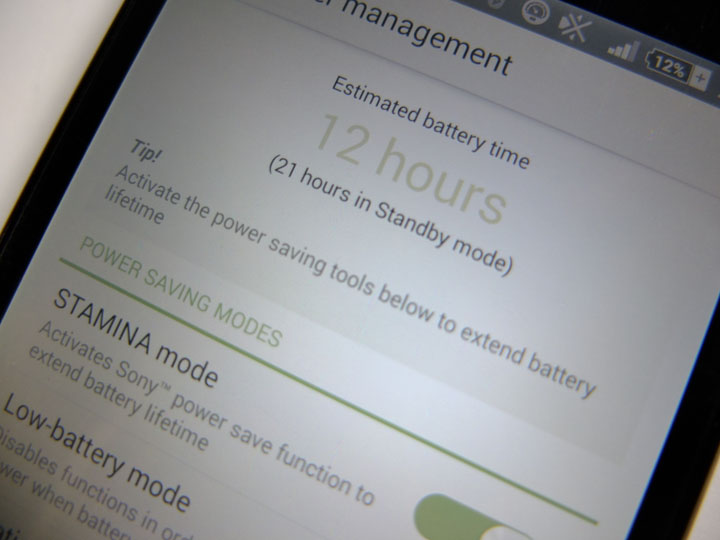 Take note, with 12% remaining, you can stretch that to 12 hours at least.

Paired with the Sony SmartWatch 2, you get Sony design language notifications and alerts on your watch, which are cool 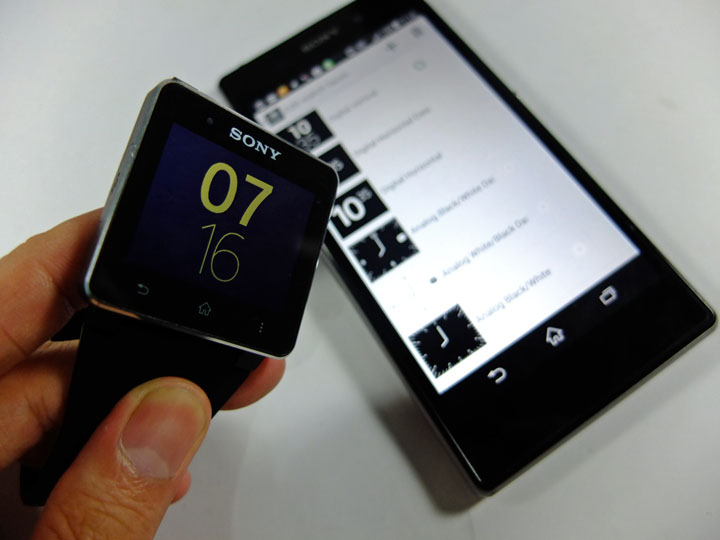 Sometimes you just want a watch that, in addition to telling the time, shows shows you notifications from your phone. Read our review of the Sony SmartWatch 2 here.

The more scuffed up the glass and metal frame gets, the better it looks

This part is purely someone’s preference (me), but the Z1 might not need a protective case at all. Unless you plan to sell it or if you’re a neat and scratch-less person, you may want to go rugged and go raw: meaning, not use a case at all. Of course, this defies the rationale of protecting your phone from accidental bumps and drops and scuffs, but from a macho sexy perspective, this makes sense.

5MP wide angle lens is becoming the new front camera standard (it’s what the Huawei Ascend G6 and Lenovo Vibe Z carry) which clearly the Sony Xperia Z1’s 2MP front shooter is behind on. There’s also no adjustable level of beauty shot, unlike those present in the Huawei Ascend P6 and Ascend G6 (and the LG G2 and LG G Pad 8.3). But you can always download a selfie cam app separately. 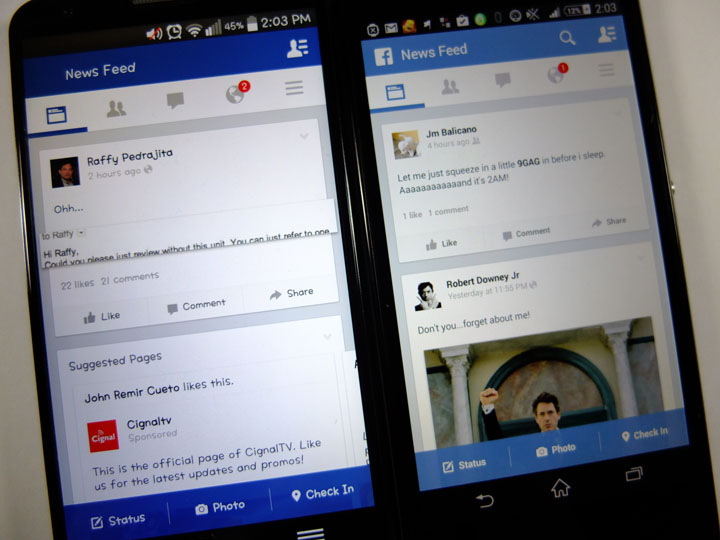 LG G2 on the left, with punchier colors; Sony Xperia Z1 on the right, a bit pale. 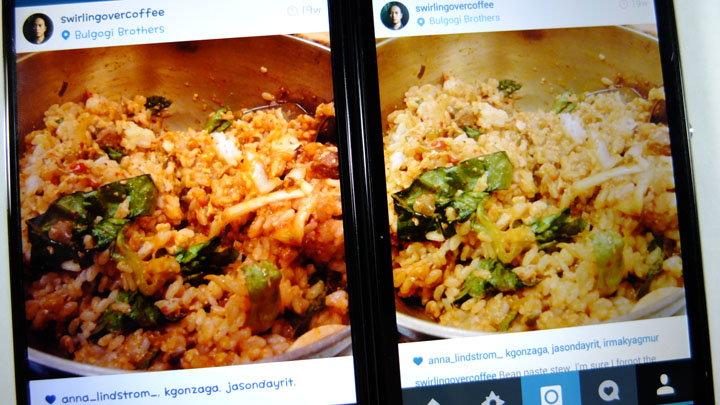 Eventual loosening of side flaps

Maintaining these flaps closed is vital in keeping the Z1 dust and waterproof. Of course, nothing adhesive tape can’t solve. An alternative is to get a charging dock so you won’t need to keep pulling open the flaps when you need to charge the phone.

The Sony Xperia Z1 is a bit tall and has a wide girth, so those who feel comfortable with smaller phones may not go with it.

The Sony Xperia Z2 is around P33k (with a better screen and a better camera) while the Z1 is around P20k (but its screen and camera don’t feel like they’ve been left behind that much). In fact, if I didn’t have my LG G2, I would have saved up for the Z1. There is sheer elegance to holding solid glass that no thin plastic slab of a phone can match. Even the spec’d up Lenovo Vibe Z has trouble competing in the aesthetic department.

Besides being elegant, the Xperia Z1 is a survivor. I’ve taken Skype calls in the shower, used Google Maps under the rain (without an umbrella), and, in my typical absent-minded way, the Z1 has already been soaked by the usual glass of water beside my laptop. You can book a taxi or a limo even though the winds have yanked your umbrella away. No more bringing ziplock sandwich bags for your phone.

Great battery life, great camera, for P20k. The only real peeves you can raise are the flaps and the slightly washed out display. The first, you can deal with (get a cradle charger or tape the flaps when they start getting loose). The second one I bet you can get used to.

The Sony Xperia Z1 sells for around P20k.

Find your connection through GoWiFi, now available in 1,500 locations nationwide