Think: mouthwatering Adobo and an appetite for friendly fun. The Datu Puti Adobo Movement is cooking up an exciting lineup of challenges and events to support its thrust to get Adobo its due accolade. Part of this gastronomic lineup of events is the Adobo Challenge, Datu Puti’s search for the best version of the Adobo among a lineup of budding food entrepreneurs. 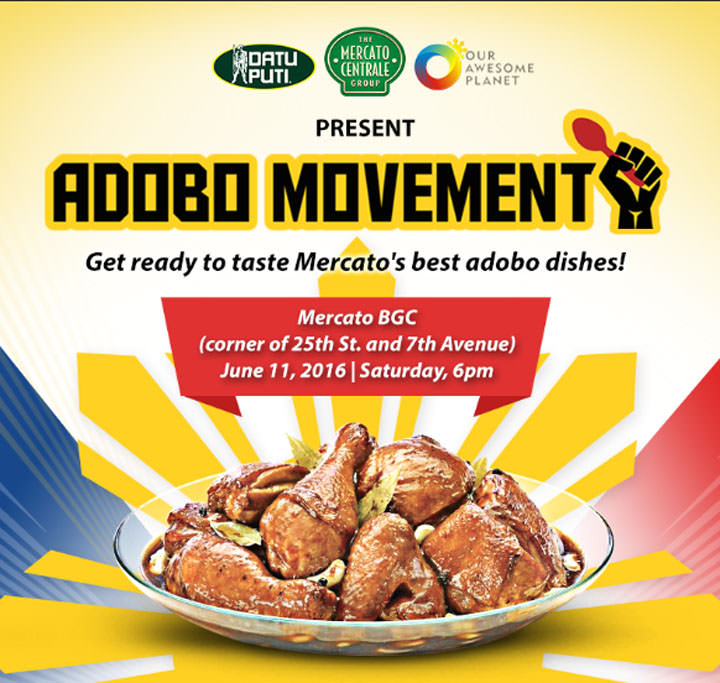 The Datu Puti Adobo Movement was initially created to push for Adobo to be our pambansang ulam. It is a movement that celebrates the cultural heritage of the Adobo dish. According to the Datu Puti Adobo Movement, all Filipinos across the regions have their own take on the dish, inspired by how the traditional comfort food is prepared by their families based on the their flavor preferences and their access to local ingredients.

To qualify, the vendor’s adobo dish must use any type of meat or vegetable, and marinated in or cooked with at least two of the three main Datu Puti products: vinegar, soy sauce, and patis (fish sauce). Accepted entries will be evaluated based on the various criteria, including: creativity of concept, which looks at the story behind the dish as well as originality, branding, and cooking technique; innovation, noting the use of unique special ingredients and Datu Puti products; and Philippine culinary heritage, including how it adopts and represents regional cooking styles.

Mercato Centrale’s finest vendors will showcase their Adobo recipes at a gastronomic showdown at the Mercato Central Saturday market in Bonifacio Global City on June 11, the culmination of the Datu Puti Adobo Challenge.

Join the Movement on June 11 and enjoy the taste fest during the Datu Puti Adobo Challenge. Rate sheets will be tallied based on the sampling served to a select pool of judges. Then, at the end of the Datu Puti Adobo Challenge, three winners will be declared, taking into the account the flavor, story, and heart behind their Adobo masterpieces. In addition, a People’s Choice Award will also be given to the crowd favorite, based on the preferences of the foodies on site.
All Adobo winners will be awarded start-up funds in cash, so they can include their winning dishes in their regular Mercato menu for at least 12 nights. The People’s Choice awardee, on the other hand, will receive over P3,000 worth of Datu Puti goods.

Aside from the Datu Puti Adobo Challenge, the celebrations at Mercato Centrale on June 11 will also feature a celebration of homegrown talent, all in full support of the advocacy behind the Adobo Movement. The party will be hosted by familiar foodie Tonipet Gaba, and the feast will be made even more festive with musical performances by musical idols UpDharma Down and Ebe Dancel.

Drop by Mercato Centrale (along 7th avenue and 25th street, across The Forum and in front of the “Between the Lines” art mural) in BGC Taguig on June 11, Saturday, to witness a showdown and showcase of the best of the best of our homegrown talents onstage and behind kitchen doors.

The Acer Aspire F is your reliable work and play laptop

ATM is a New Skimmer: Crooks Bring ATMs on Their Side