Press Release, 5 years ago 4 min read 326
[13 January 2015] As a public service to millions of Filipinos who want to share their Papal Visit experience online, Twitter and Smart Communications, Inc. (Smart) have teamed up to offer unlimited access to the popular social networking app on mobile phones for free from January 15 to 19, 2015. 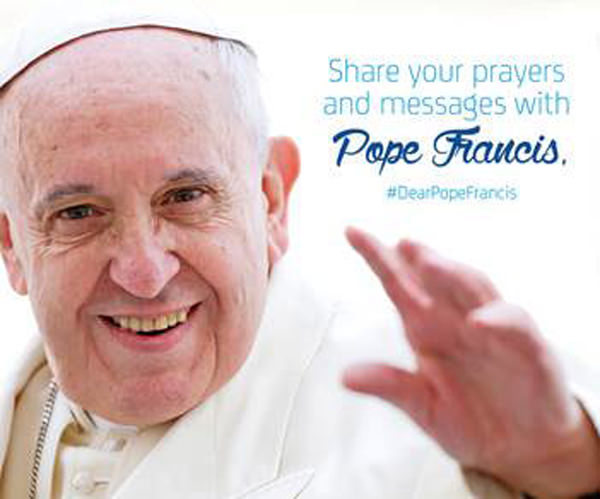 Under the service, all 69 million prepaid and postpaid subscribers of Smart, Sun Cellular and Talk ‘N Text may take to Twitter without worrying about mobile data charges, allowing more Filipinos to follow the Pope’s Twitter account (@Pontifex), send wishes and prayers to the Pope using #DearPopeFrancis hashtag, and get real-time updates on the much anticipated apostolic and state visit of Pope Francis in the Philippines.

More details of the Pope’s visit, including #DearPopeFrancis Tweets, videos, stories and the Pope’s itinerary, can be found at dearpopefrancis.ph.

“With this collaboration, Smart and Twitter aim to allow more Filipinos to get involved and immerse in this historic experience with Pope Francis, who our Catholic nation hold very dear to our heart,” said Napoleon L. Nazareno, president and CEO, PLDT and Smart.

Once registered, subscribers may tweet their aspirations and messages to the beloved Pope using #DearPopeFrancis. Subscribers may also post real-time updates, upload photos, and even reach out to him through his official Twitter account @Pontifex on their mobile devices at no extra cost.

“In the same way Pope Francis has embraced Twitter with his official account @Pontifex to reach out to more Catholics all over the world, Filipinos may use this very same platform on their mobile devices to see events unfold and join heartfelt conversations – whether they are physically present in the event or not.

“Nowhere is this service any more timely and suitable than during a momentous occasion in the world’s social media capital and Asia’s largest Catholic country. Through this, we shall create and leave behind a digital footprint of our nation’s Papal visit experience,” Nazareno added.

The Pope is the 2nd most followed world leader on Twitter today with over 17 million followers across his nine accounts in different languages. His Tweets are among the most popular on Twitter and are consistently retweeted several thousand times.

“Twitter is excited to partner with Smart to enable all Filipinos to get closer to the Pope and connect with the local community for this historic occasion – from expressing their hopes and prayers using Tweets with #DearPopeFrancis hashtag as well as getting real-time updates, photos and conversations in their Twitter timeline on Pope Francis’ first-ever visit to the Philippines. Most importantly, join the Twitter flock and sign up now to follow the Pope’s Twitter account (@Pontifex) during his visit, so that you can be one of the first to get the Pope’s Tweets via the Twitter app on your Smart mobile device,” said Arvinder Gujral, Director Business Development, India and SE Asia, Twitter.

With over 284 million monthly active users worldwide – 80 percent of which are on mobile – Twitter has become an essential social medium for netizens keeping an eye on real-time updates and social pulse on significant events and issues in the Philippines and around the world.

When the flock tweets

Upon successful registration, subscribers may either use the Twitter mobile app or access m.twitter.com on their mobile browser for the whole duration of the Papal visit. Subscribers have to maintain at least P1 load balance every day or be subscribed to any plan, promo or bundle to enjoy the free service.

Moreover, mobile users who are registered to the ongoing Smart Free Internet promo may enjoy the Free Twitter service on top of their 30 MB allocation.

Hordes of Filipino devotees are expected to flock to the scheduled gatherings with Pope Francis in the course of his five-day apostolic visit, the culmination of which is a big Eucharistic celebration on January 18 where over 5 million are estimated to show up and catch a glimpse of the Pope for the first time.

Electricity Rates go down this August

Q1 2020: Over 200k Ransomware Attempts Blocked Against Smbs in Sea

Amid Quarantine, Students Support Each Other Through Meaningful Connections