The complete 2nd season is now available in the Philippines, exclusively on iflix

iflix, the world’s leading Internet TV service for emerging markets, is pleased to announce that the highly anticipated second season of the award-winning, highly acclaimed series, UnREAL is now available exclusively on iflix.

UnREAL, from A+E Studios®, explores behind-the-scenes drama and manipulation surrounding the production of “Everlasting” – set against the backdrop of a fictional reality dating show. The first season received positive reviews and critical praise for its satirical take on reality dating shows that don’t pull punches. Season 2 follows Constance Zimmer, as she reprises her role as the show’s Executive Producer, alongside Shiri Appleby as her unstable and morally conflicted assistant. The dynamic duo is back, scheming and fueling controversy for the sake of TV ratings. Every episode is now available to stream and download, exclusively on iflix. 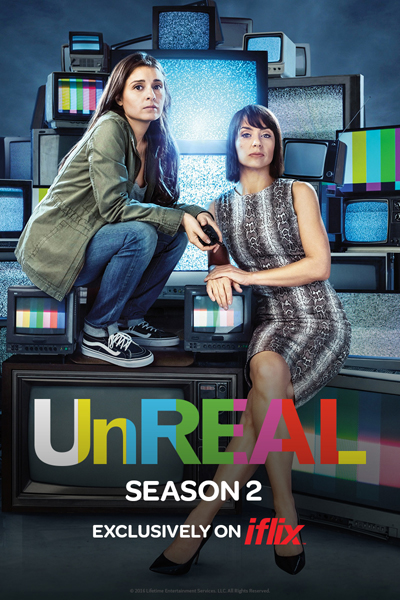 iflix Philippines Country Manager, Sherwin Dela Cruz, commented: “We are constantly seeking out fantastic new content to deliver to our subscribers in the Philippines and across the region. The controversial first season of UnREAL was one of the most talked about shows of 2015. We are thrilled to offer Season 2 exclusively to our members as a testament to our ongoing commitment to provide the absolute best entertainment available on iflix.”

Now available in Malaysia, Thailand, the Philippines, Indonesia, Sri Lanka and Brunei, iflix will continue to roll out its world-class service to key additional emerging markets in the coming months.  Offering consumers a vast library of top Hollywood, Asian regional, and local TV shows and movies including many first run exclusives and award winning programs, each subscription allows users to access the service on up to five devices, including phones, laptops, tablets, and television sets, for viewing wherever, whenever. iflix subscribers can also download TV shows and movies from iflix’s extensive catalogue for offline viewing. The service is priced at only PHP 129 per month in the Philippines for unlimited access with no ads!

About iflix
Iflix is the world’s leading Internet TV service for emerging markets, offering users unlimited access to thousands of TV shows, movies and more. With a vast selection of first run exclusives, award winning movies and shows, plus the best in local and regional programs, iflix places the entertainment people want at their fingertips to either stream or download. For one low monthly fee, iflix subscribers can watch on their mobile phone, laptop, tablet, TV… wherever, whenever.

Cadbury Dairy Milk frees the joy with The Joy Wagon

Building the nation one teacher at a time

Get into the habit, #UseDebit with Metrobank