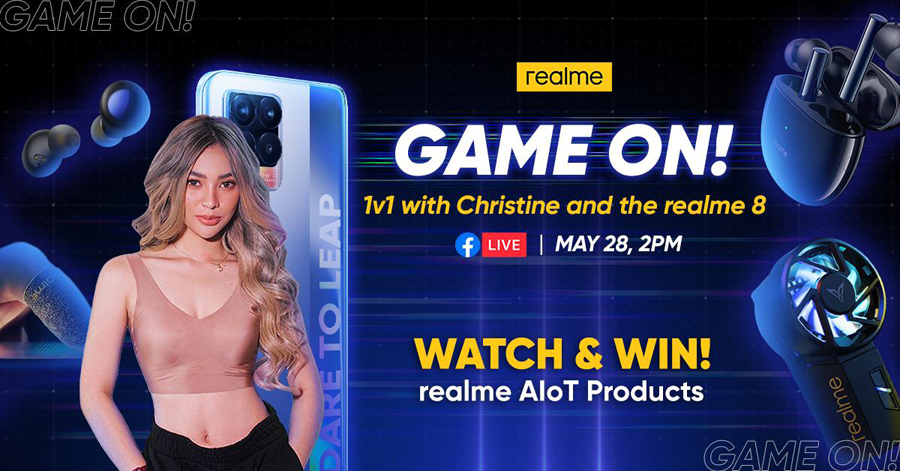 Manila, Philippines –  realme, the number one smartphone brand in the Philippines, continues to raise the bar in the local gaming scene with exciting new events and offerings to cater to the needs of Filipino mobile gamers.

To kick off all the brand’s gaming initiatives, realme is set to host Game On! 1v1 with Christine Samson, streaming live on realme’s Facebook page on May 28, 2pm. The livestream will feature the realme products that every mobile gamer should have in their tech arsenal including the recently launched realme 8 that comes packed with upgraded features to suit every gamer’s needs. Mobile gamers can also look forward to other exciting gaming tips, announcements, and realme giveaways in the upcoming livestream event.

As part of its push to be the top smartphone of choice for Filipino gamers, realme co-presented PayMaya’s inaugural PlayMaya Tournament earlier this month, which kicked off PayMaya’s new PlayMaya feature.

The PlayMaya Tournament was a nationwide esports tournament featuring Filipino favorites such as Mobile Legends, Call of Duty Mobile, and PUBG Mobile. Several activities and events were also held, such as a raffle sponsored by PayMaya and a special celebrity exhibition match with popular Filipino gaming personalities such as Ghost Wrecker and CongTV.

Further strengthening their position in the local gaming scene, the brand is also set to launch other events for Filipino mobile gamers in the month of June.

The award-winning realme Mobile Legends Cup comes back for its fourth season.

The Quill Award-winning Mobile Legends tournament, realme’s initiative for both amateur and professional players to hone their skills in the game, returns for its fourth season. Players will duke it out for the glory of being the best Mobile Legends team in the Philippines, and the prize pool of P500,000. Interested gamers can sign up for the tournament at http://bit.ly/RMCS4Register until June 1.

Marketing students from across the Philippines will represent their schools and play each other in a league starting from June 16, culminating all the way in a playoffs and grand finals on August 20 for a prize pool of P100,000. Registration is open until May 31 via http://bit.ly/realmeXPJMA.

Level up your gaming experience with realme mobile accessories

realme continues to enhance Filipino gamers’ overall mobile gaming experience with the release of their new smartphone accessories, which takes their play to the next level.

The gaming kit, which includes the realme Cooling Back Clip for smartphones and the realme Finger Sleeves, aims to be the ultimate companion for gamers’ play sessions, addressing a number of issues that arise during extended periods of mobile gaming.

The realme Cooling Back Clip rises to the occasion with its patented dual cooling technology that makes use of a power-driven semiconductor ice chip and a powerful 7-blade fan. Keeping your game to optimum level, a thermal conducting silicon chip absorbs heat and disburses it with the 5500rpm cooling fan all throughout the device. It maintains a steady temperature of 25°C and prevents any lag due to thermal throttling, power saving activation, and major damage to the phone’s components. To operate the device, the clip must be connected to a power source via the USB Type-C cable.

Meanwhile, the realme Finger Sleeves are a must-have for gamers to protect their smartphone’s screen from sweat while keeping the sensitivity to maintain total control on the touchscreen. Coming in a pack of two, the sleeves are made with superconducting electric fiber material with 30% silver conductive fiber that has strong electrical conductivity and provides 6x more sensitivity than sleeves made with ordinary carbon fiber, making sure that every single touch is responsive with the touchscreen. The realme Finger Sleeves are only 0.25mm thin and are equipped with spin covering yarn technology and a four-dimensional elastic design that makes sure they fit any hand in a light and breathable way.

Officially launching on May 28 on Lazada and Shopee, the realme Cooling Back Clip will retail for P1,590 while the realme Finger Sleeves will retail for P240. As an introductory offer, flash sales on both e-comm platforms will be hosted from May 28-30, where you can purchase the Cooling Back Clip for only P1,290 and the Finger Sleeves for only P190.

To give you the complete gaming experience, these will also be available for purchase as a bundle together with the realme 8 and the realme Buds Air 2 Neo. Originally worth P18,310, the exclusive bundle will be available for only P16,460 in realme’s official store in Lazada until May 30.

10th HPV Summit: A cervical cancer-free future is a battle that must be won

No need to wait for 12.12! Here’s where you can get everything you need with free shipping

Enjoy even more of your favorite Jollibee Sweet Pies with the new 6 pc. To-Go Box!