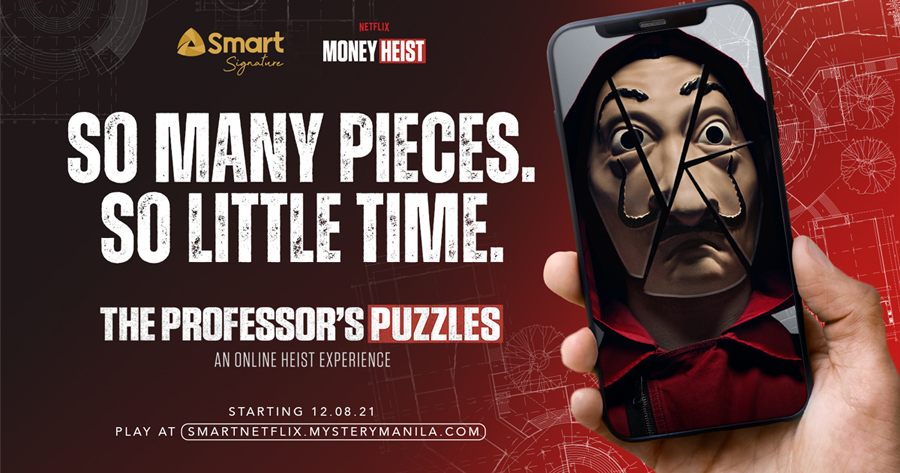 Experience the excitement and fun as you race against time in solving puzzles, answering riddles, and figuring out the clues left by The Professor to escape the heist in this virtual escape room. To make it more exciting, players who have the fastest time in solving the escape room can get a chance to win a 5G handset from Smart Signature.

Join the resistance in the Professor’s Puzzle escape room experience by visiting https://smart.com.ph/Pages/prof-puzzles.

Get a Netflix mobile subscription with Signature Plans+

Watch the final season of Money Heist on Netflix with Smart Signature Plans+, the first and only postpaid line-up in the country that features Unli 5G access for subscribers.

Smart Signature Plans+ also come with a Netflix mobile plan subscription for unlimited enjoyment of thousands of award-winning shows, series, and more. The plans also include Unli Calls & Texts to All Networks, and Unli Calls to All Landline Numbers

Smart Signature Plans + starts at 999 per month. Customers who are looking for a lite version may also avail Smart Signature Lite Plan 599 that also comes with a Netflix subscription.

Smart Signature Plans+ is powered by the country’s fastest and most reliable 5G mobile network as reported by Ookla, the global leader in mobile and broadband network intelligence. To date, Smart has already fired up around 6,400 5G base stations nationwide making it the country’s first, fastest, and widest 5G network.

Smart has also reasserted its dominance as the Philippines’ fastest mobile network for the fourth year in a row, based on analysis by Ookla of tests taken with Speedtest® covering the first half of 2021.

To know the Smart Signature Plan the suits your lifestyle, visit https://smart.com.ph/Postpaid/signature.

Win P5,000 cash plus get a cashback when you Park, Shop, Dine, and Play at SM malls!

ViewSonic Ranked No.1 Brand in the Global Interactive Display Market Beyond China

MVP group strengthens support to Armed Forces of the Philippines