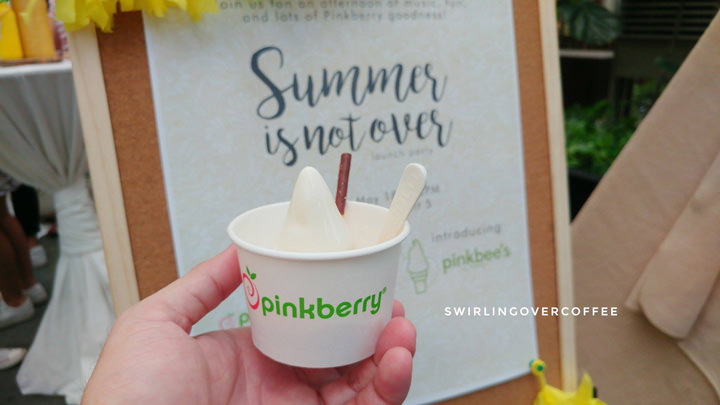 Frozen yogurt brand Pinkberry has something new for you: the Pinkbee. It’s a new take on soft-served ice cream – light and creamy low-fat ice cream made with milk, served with honey and Peppero stick, offered in various Pinkbee + topping combos and is available starting May 29. Pinkberry is also launching its 12 Days of Summer Notebook Promo wherein limited edition Pinkberry Notebooks are up for grabs.

Here are the six Pinkbee and topping combos:

A Pinkberry Sunday night. Tropical Mango (with 7 toppings) for me and fruitbowl for her. I steal her fruits and she my yogurt. 🙂 #pinkberryph #yogurt #lgg5 #fruitbowl #mango #tropicalmango

Get Limited Pinkberry Notebooks: Here’s How

You can get limited edition Pinkberry notebooks by joining Pinkberry’s 12 Days of Summer Notebook Promo. The first design is the watercolor-themed notebook on display at Pinkbee stores staring May 29 (coinciding with the availability of Pinkbee.) To quality, collect 12 stamps – that’s 6 stamps for Pinkbee’s and 6 stamps for Pinkberry yogurt products worth at least P300 for every single receipt. Promo is from June 2 to August 4, 2017.

Pinkberry virtually reinvented the frozen yogurt category. The company opened its first store in California in January 2005 and their first store in the Philippines, under Swirly Goodness Philippines Inc, in December 2011 at Greenbelt 5. They have now have six other stores (for a total of seven) found in Rockwell Powerplant Mall, SM Aura, Alabang Town Center, SM Megamall, Ayala Triangle Gardens, and SM East Ortigas.

PayMaya Philippines, City of Muntinlupa empower citizens with access to the digital economy

Have your Wendy’s favourites delivered with foodpanda!