Philippines AirAsia gears up for 2016

Promo fares for domestic and international flights to/from the Philippines are up for grabs now!

The hype is building up for AirAsia in the Philippines with the consolidation of its operation two years after its local unit, AirAsia Inc. signed a partnership agreement with home grown airline ZestAir in 2013. 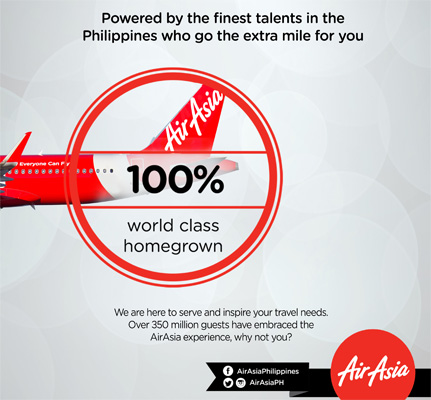 Philippines AirAsia CEO, Joy Cañeba said, “Efficient service to our guests and safety are at the heart of everything we do in Philippines AirAsia. We are here to provide only the best value and world-class service that every Filipino deserves.”

Philippines AirAsia has replaced the AirAsia Zest brand following the approval from Philippine regulatory authorities in September by the Securities and Exchange Commission and in December by CAAP (Civil Aviation Authority of the Philippines) and CAB (Civil Aeronautics Board) this year.

The airline has a total of 927 regular employees after the transition to a single operating certificate in September. Captain Dexter Commendador was also recently appointed Chief Operating Officer.

To celebrate the announcement, international and domestic flights to/from Manila, Davao, Cebu, Tagbilaran (Bohol), Puerto Princesa (Palawan), Kalibo(Boracay), Tacloban, Hong Kong, Macau, Malaysia and South Korea are on promotional sale from as low as P1,299, all-in and one-way only and available for booking at www.airasia.com from today (December 7) to 13 December 2015. The travel period for this promo will be for immediate travels now until 30 June 2016.

Guests may also opt to complement their trip with Philippines AirAsia’s in-flight meals and get as much as 20% discount for pre-booked Bangus Sisig, Beef Caldererta, Adobo, Vegetarian Chickpea Curry and other ASEAN flavoured dishes.

PAA operates a fleet of 15 aircraft with domestic and international flights out of Manila, Cebu and Kalibo (gateway to Boracay). It is by far the only local carrier that services the most number of international flights from China and South Korea to Kalibo International Airpor with fly-thru services via Kuala Lumpur from Manila to various points in Asia, Australia and beyond.

Philippines AirAsia is part of the AirAsia Group that has been awarded the World’s Best Low Cost Carrier for seven consecutive years running by Skytrax since 2009 to 2015.

Smart and PLDT subscribers to enjoy the iflix gift of entertainment

Instant, Secure, and Convenient – Reasons Why Customers and Companies Will Like the Sodexo Mobile Pass

Grab, Quezon City Provides Thousands of Livelihood Opportunities to Help the City Recover From the Pandemic