Home > News > Over 10,000 Runners Rock the Block at the Music Run by Philam Vitality in Manila

December 3, 2016, Taguig City, Philippines – An infectious and energetic blend of music filled the atmosphere at McKinley West as over 10,000 participants, a.k.a. Music Runners ran, danced and partied at the second edition of The Music Run by Philam Vitality. The event, hailed in other countries as the Ultimate 5k Running and Music Festival, returned to Manila bigger and bolder following a smash-hit debut at the Philippine Arena last year. 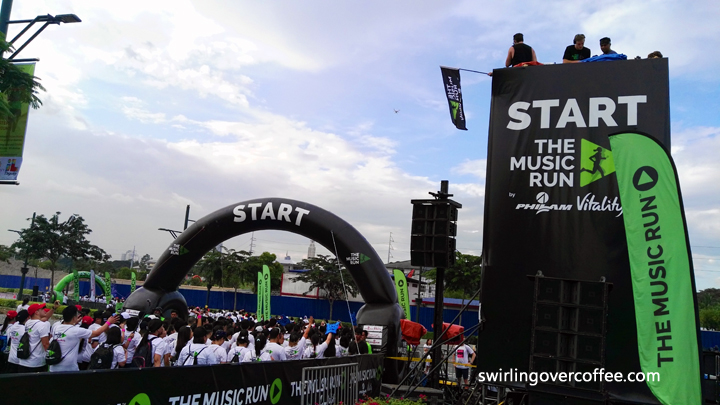 A phenomenal and futuristic run, The Music Run is an award-winning event that offers a unique total music immersion experience and has been making waves all over the world, including multiple sold-out events in Asia this year, and new tour dates announced in India, Europe and South Africa for next year.

The Music Run by Philam Vitality started on a high note at the Music Village with a pre-party featuring local alternative soul band Sud, who rocked the crowd with upbeat renditions of their hits ‘ How We Play’ and ‘Sila’. Pre-race energy levels were further pumped up with a mass warm up by Gold’s Gym, the much-loved music and dance infused workout. 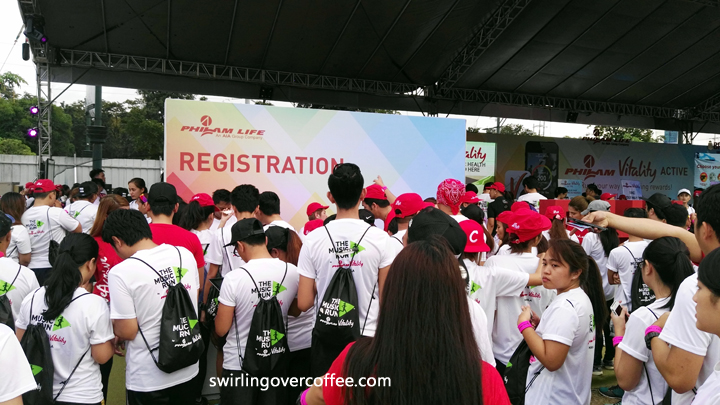 Music Runners ran, danced and partied across a 5km route comprising of five 1km Music Zones – Rock, Pop, Old School, Hip Hop and Dance. Lined with over 120 concert-quality speakers pumping 150,000 watts of music the entire way, The Music Run by Philam Vitality is the world’s loudest 5k fun run . The soundtrack for run was voted for by the participants through a bespoke online music app developed in partnership with Spotify®.

In each of the Music Zones, Music Runners were treated to special interactive activities: From cool, cold pyrotechnics in the Philam Asset Management Inc Rock Zone; a tunnel with hanging balls at the BPI-Philam Pop Zone ; a stage featuring AirAsia crew lip syncing to the top-voted songs with an electric “Superbowl” performance in the AirAsia Old School Zone with a chance to win exclusive flights and prizes; photo opportunities with graffiti artists, dancers and photo walls in the Hip Hop Zone; to a mobile disco tunnel with glowing lights in the Philam Vitality Dance Zone. 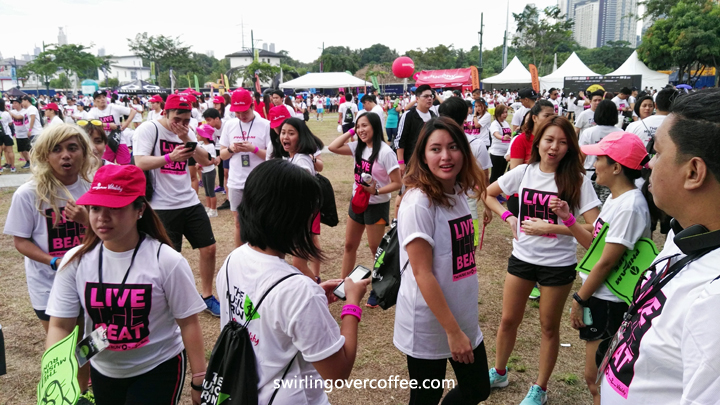 Presenting Sponsor Philam Life, who recently launched the Philam Vitality Active App, hosted a series of engaging running, swimming, and cycling challenges at their booth. A few lucky Music Runners who downloaded the app also walked away with cool prizes such as fitness devices and gym memberships.

“Through The Music Run, Philam Life offers Filipinos a chance to stay fit while having fun. Last year was a really big success and we were inspired to bring it closer to more runners this year,” said Philam Vitality Deputy Head Kats Cajucom. 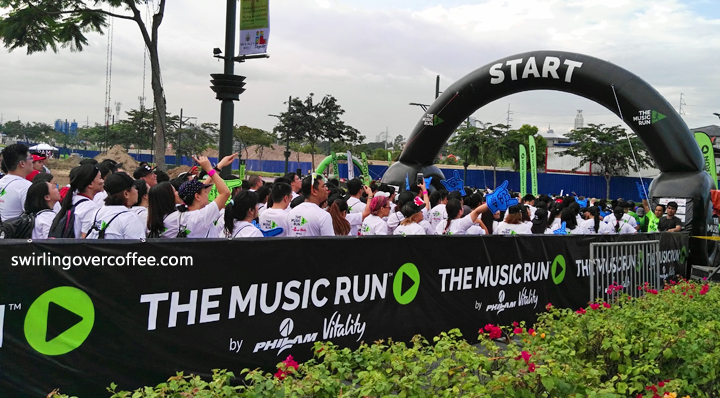 “This was made possible with the Philam Vitality program, a first of its kind, full-scale wellness program where members get rewarded for making healthy choices. Through Philam Vitality, we are taking active steps to positively transform the lives of Filipinos by helping them to live longer, healthier and better lives,” she added.

Music Runners were also treated to endless music and fitness-inspired entertainment in the Music Village courtesy of event sponsors. 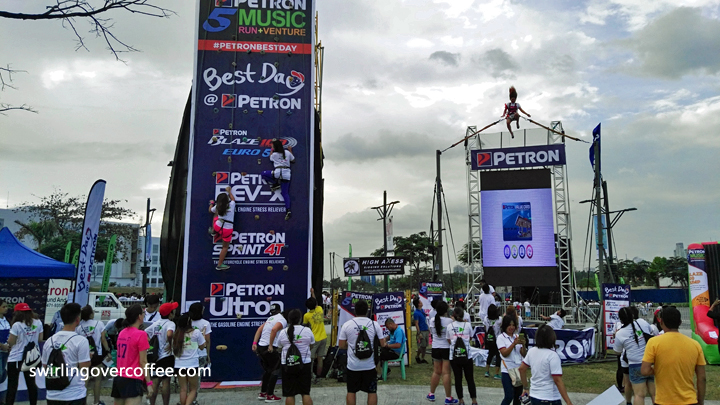 At the Alcatel booth’s basketball challenge station, an Alcatel Pixi First phone was given away to the best scorer every hour. Alcatel Shine Lite smartphones featuring remarkable camera qualities were also won by Music Runners who dressed up in the theme “Dare to Shine,” as well as a Music Runner who struck the Best Pose at their photo booth.

Other sponsors such as Oakley and Saucony also showcased their latest products at their respective booths and provided Music Runners a chance to win exclusive prizes.

To cap off the event was the ultimate music festival that kept the energy high with dancers, laser lights, chill out zones, and fireworks. Australian radio house DJ Sam Withers, who was a big hit in last year’s after-run concert, wowed audiences once more with a stunning performance. 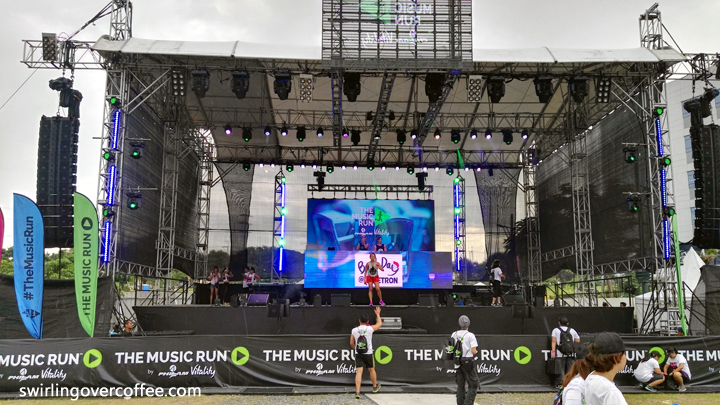 “The Music Run is not just another fun run. It aims to bring our running experiences to new heights ofexcitement. The Music Run first made waves in Asia and now it is sending waves of good vibes in cities around the globe,” said Martin Capstick, Chief Executive Officer and Co-Founder of Exceed Sports and Entertainment, event promoter of The Music Run in multiple cities in Asia.

“We are really glad to experience the Filipino energy once again. We hope that even after this run, more Filipinos would become inspired to take up healthier ways to have fun,” he added.

About The Music Run

Launched in 2014, The Music Run is the ultimate 5k running and music festival. For music lovers, casual runners and fun seekers, The Music Run is more like a party than a run – it is the only 5km fun run that puts music at the heart. The Music Run empowers participants to control the soundtrack of the run by voting for their favourite songs in the build up to the Event. Voting is via a bespoke ‘Music Voting App’ and the songs with the most votes make the official run playlist.

On event day runners experience the world’s loudest 5k running course, known as ‘The Sound Track’. Over 120 speakers pump out the songs participants voted for across 5 interactive and music themed zones. The run ends with the ultimate after-run music festival. With music every step of the way, running never sounded so good.

2016 will see further global expansion of The Music Run with additional events across Asia and inaugural events planned in North America and Africa. www.themusicrun.com

Huawei invites you to give more this Christmas

NBA League Pass With 15% off Now Available for Globe Subscribers