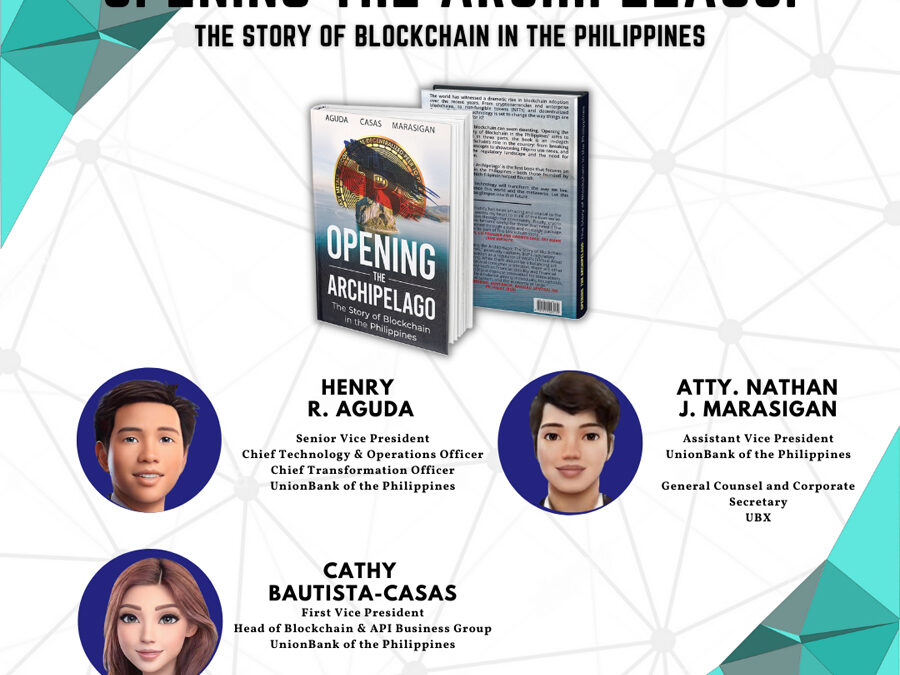 Centuries after the age of Discovery, the Digital Era, fueled by thriving innovation, still parallels its ancient predecessor in spirit: to explore unknown areas and to cultivate opportunities towards positive development.

In this day and age, digital transformation has become an imperative for institutions and businesses to thrive in the digital era. Emerging technologies such as blockchain have provided unparalleled opportunities to accelerate innovation. In the Philippines, we have seen a blossoming of blockchain use cases in various sectors such as finance, art, gaming and education to name a few.

To spur the general public towards a deeper understanding of blockchain and its role in the future of Philippine society, co-authors Henry Aguda, Catherine Casas, and Atty. Nathan Marasigan launched their new book entitled Opening the Archipelago: The Story of Blockchain in the Philippines, which is published by Bookshelf PH, a publishing house and online marketplace for local books, eBooks,and audiobooks. The authors hope that the information in the book demystifies blockchain, enabling more Filipinos to build businesses around this new technology.  As either the next step towards true financial inclusion or the next big virtual revolution, the book aims to localize the blockchain uprising and give Filipinos a glimpse into how blockchain can transform local industries – from finance and banking, to education and even governance.

The authors elaborate on this in their new book, Opening the Archipelago: the Story of Blockchain in the Philippines. Told in three parts, the book describes the foundations of blockchain, the cutting-edge use cases and initiatives of the technology in the Philippines, and the regulatory environment in the space.

A blockchain is a distributed database that stores information electronically in digital format. Best known for their crucial role in maintaining a secure and decentralized record of transaction in cryptocurrency systems such as Bitcoin, it assures the fidelity and security of data records and allows digital information to be recorded and distributed, but not altered, deleted, or destroyed.

Carrying the negative connotation sometimes associated with Bitcoin and other digital currencies, the daunting task of communicating this information to the masses was undertaken by the three authors to make the subject of blockchain comprehensible even to the most digitally challenged individuals.

With backgrounds in banking, trading and financial technology, and law, the authors melded their varying perspectives towards a greater purpose: to simplify blockchain and broaden the audience of what they believe will completely transform day-to-day life.

Atty. Marasigan, a lawyer with a passion for technology and innovation, takes pride in the novel’s trailblazing capacity, while still addressing the highfalutin potential of the topic. “This book was not intended to provide lengthy or technical narratives that solely appeal to those already invested in the subject matter. The book was intended to make information accessible and easily digestible by all – from financial experts to our nanays, tatays, lolos, and lolas,” says Marasigan. “Not a lot of books have been written on blockchain, much less Filipino-authored. I believe, to date, there has yet to be a book that focuses solely on Filipino use cases and initiatives – also making this the first of its kind.”

The Future of Finance

This book is an account of how blockchain technology has made a significant impact on our nation and its people thus far. In its pages, it promises to answer the burning ‘what’ and ‘how’ on blockchain, while exploring the most interesting and innovative use cases across multiple industries..

Casas, who has over two decades of experience in the banking and finance industry, has already been at the forefront of the future of finance. Her perspective harps on how this technology takes financial inclusion to a different and more future-proofed level. “The power of blockchain goes beyond banking and is strong enough to alter the entire economic system,” says Casas. “With the unpredictability of tomorrow, information is key to making the next move. The work we’ve done provides this knowledge to whoever wishes to be at the front of the world’s nonstop evolution.”

The great divide that hinders financial inclusion and digital transformation is seen in how the messages are delivered to the audience. Scaling the digital frontier is an act of boldness that those accustomed to tradition may not bother to attempt – leaving them behind as the future moves forward. Opening the Archipelago also aims to dispel the stigma surrounding blockchain and financial technology, sometimes pegged as malicious platforms or scams, and transmute it into a necessity.

Henry Aguda, a transformational executive leader who has dedicated most of his career to financial inclusivity, digital transformation, and data protection, is inclined to encourage all Filipinos to embrace modernization with eyes and minds open.

“I hope that this book may serve as a jumping off point for a broader discussion of the role of blockchain technology in the Philippines. I invite other business leaders, entrepreneurs, community organizers, investors, media, and other stakeholders to join in, as it’ll take the entire business community to maximize its full potential to change Filipino Society.”

Opening the Archipelago was published by Bookshelf PH, an online marketplace and boutique publisher for print, digital, and audiobooks. According to the Bookshelf PH team, Marasigan, Casas, and Aguda were uniquely positioned to document the potential of blockchain in the Philippines, given their position as executives at Unionbank.

“While there is no shortage of blockchain and crypto advocates in the Philippines, what set the authorship team apart was their deep experience as banking and fintech leaders. They could capably articulate how the technology would transform not only the lives of consumers, but entire industries as well,” said Sam Balinado, Bookshelf PH’s head of content, who works with partner thought leaders and authors in financial literacy, business, and women empowerment.

Pre-order a copy of Opening the Archipelago: The Story of Blockchain in the Philippines today for only P1000!

UniPin SEACA 2021 is Back in November, Presenting the Best of Southeast Asia’s Esports Team Battles

Get back on the road with Caltex Fuel for Fuel promo

Score a Nintendo Switch, a Laptop, an Electric Guitar, and More at Incredibly Discounted Prices during Shopee’s Mega Midnight Deals this 3.15 Consumer Day!

Reawaken the true self with the new additions to the Samsung Galaxy M Series – Galaxy M23 5G, M33 5G are now available!

Student in the New Normal? These Are 3 Security Tools You Should Use

HP at CES 2021: The Future of PC Innovation is Now